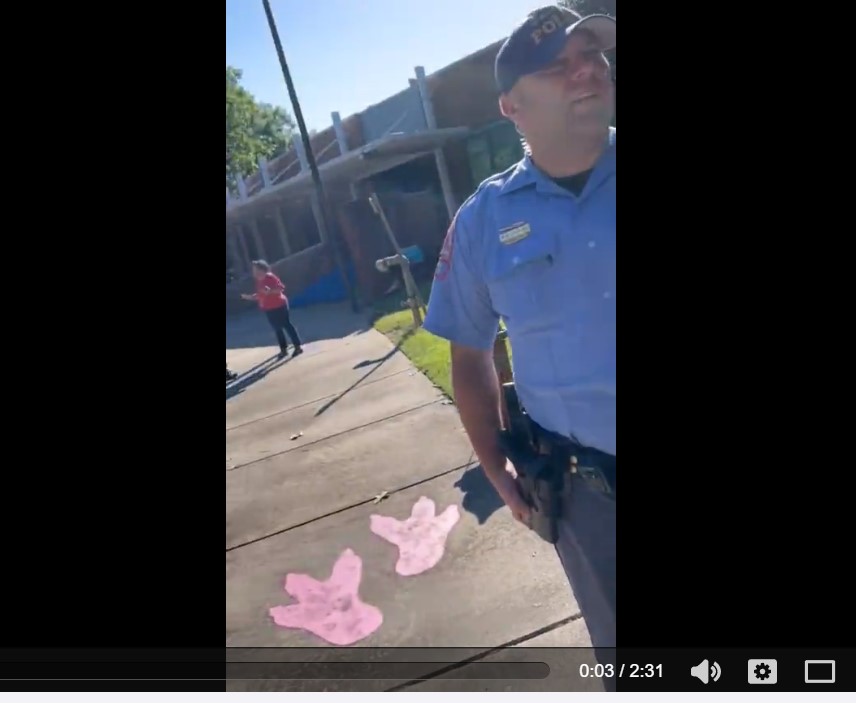 Concerned Parents at a recent Wake County School, North Carolina, School Board meeting gathered to make public comments about mask mandates, during what the Board acknowledged was ‘National Bullying Prevention Month’. What is ironic is it was the parents who reported that they were the ones who felt bullied over the school board’s mandatory face mask requirements.

“I believe in public education. It is a melting pot, it is supposed to be where people go to learn about other cultures and see interesting things. I want my child to participate in that world,” Chad Stall told me, admitting to me that through his horrible ordeal he wondered where all of the “granolas” were. Stall would not call himself a Conservative, proving that masks are a “bi-partisan” issue.

THERE IS NO POLICY- COUNT HOW MANY TIMES HE ASKS FOR THE POLICY. THERE IS NO LAW!

Below is the painfully frustrating video footage that shows the awkward enforcement of masks by numerous community members, school security, Raleigh police, and Stall’s son. These videos happened days before the Oct. 5th school board meeting.

The woman at the end, before she called the Police, told Stall- over and over- to go to the school board to discuss his point of view about masks. Then, after getting the run around about the things she could not answer about attendance and what would happen if Stall’s son chose not to wear a mask to school, she got frustrated and called the police to intervene- because there were no policies or laws that she could cite.

Consider this video of pleadings for the safety and health of his child:

Watch as an officer gets frustrated and has to walk away numerous times. He also does not have a law to enforce, other than one that denies a child his education, called trespassing. No doubt he was not happy that he has no law or no policy to enforce.

“School Boards do not make laws,” Stall reminded the officer.

Key Point: In North Carolina, there is no comprehensive law or policy about masks or information about what will lower the COVID restrictions on the public because Gov. Roy Cooper has used his emergency powers to demands things, with no proof that his emergency powers are necessary at all.

EVERYONE IS FORCED TO ENFORCE COOPER’S EMERGENCY POWERS

Consider this-with all of the talk of mental health crisis prevention- someone should listen to the stuff that makes a community fight and be angry with each other. At this point we have community members who are forced to enforce the political whims of Roy Cooper, and there are conflicts that have no remedy, over mask usage.

Stall was not allowed to be at the Wake Co. Board meeting on October 5, when the Board was meeting to vote on continuing the mandatory mask mandates for students and staff, because he received a warning that if he did, he would get a trespassing charge.

SCHOOL BOARD’S WHIM- DO THEY LIKE COOPER OR NOT?

At that OCT. 5th meeting, parents relayed numerous stories of their own children telling them that they felt bullied by some teachers and staff over constant “mask checks” and feeling singled out and shamed over their masks.

“My child cried when a principal laughed at him when he was struggling with his mask; that is bullying, one parent said to the school board that night.

You can hear numerous parents reported feeling bullied at the following meeting on October 5; public comment starts at 1:03:00:

One parent, at 1:35:50, said “free Chad Stall, he deserves to have his opinion heard.” Stall, I later found out, had been threatened that day that if he tried to attend the meeting, he would be charged with Trespassing.

I attended this meeting. I can confirm it is required that attendees pre-register and get approval to speak- so I know that the room was half empty, and there was plenty of speaking time for public comments. In fact, the school board solicited more public comments by email on the day of the event, because they had a free space.

So why was Mr. Chad Stall been told he would get a trespassing charge if he was on the grounds the night of the meeting? Because everyone is frustrated and doesn’t know what to do. Check out the note he got from the Wake County Public Schools System.

On September 27, 2021, correspondence was sent from the Office of Security based upon your actions on September 21, 2021, and September 22, 2021.  Our records show that this correspondence was attempted to be delivered by certified mail by the US Postal Service on October 1, 2021 at 5:09 pm, that a notice was left due to “(No Authorized Recipient Available)”, and that you have not picked up the correspondence.  Therefore, I am sending you a copy of this correspondence (see attached).  I have also attached a copy of Board policy 1740 (Student and Parent Grievance Procedure).  Thank you for your cooperation.

Stall is being tresspassed, as you can see because he wants to know by what public policy schools are forcing children to wear masks- that is what has catapulted Stall into a life he did not expect to be living. “

And he isn’t alone.

DOES HE HAVE LEGITIMATE CONCERNS? WHERE DOES HE GO NOW?

Stall is motivated by concern for his child, who he and his wife say has a medical condition that makes them concerned for him wearing a facemask for prolonged times. Stall’s wife is a dentist and has a medical background, but no one respects that fact. The Stalls are aware of their North Carolina history, including the history of deaths attributed to breathing in man-made fibers, but no one is respecting their well-grounded and logical concerns over local history. Instead, the system is demanding he submits.

Stall shared numerous other correspondences with me that show his point of view, which have been ignored.

THIS IS WHERE IT STARTED – HE ASKED: WILL WE RETURN TO NORMAL? HIS ANSWER: ‘NO. GET OUT.’

“I am concerned about the mental health of my son and other people if they do not believe there is a light at the end of the tunnel. It feels like the schools are signaling that we will never return to normal, that they will always be forced to wear these masks,” Stall told me.

Before he got what led up to the Tresspass threat- Stall put down his thoughts about “getting back to normal” to the head of St. Timothy’s School in Raleigh North Carolina where his son attended first. Stall wrote, in reaction to the school’s news that a teacher of their’s was arrested for driving while intoxicated, high and had caused severe injury, the following:

“I would like to reiterate the importance of mental health as the school continues making polices and decisions regarding how we all react to the Covid pressure.  The outside consideration would provide a lot of reminder of how we could all be living. At least give the teachers, students, and staff confidence of a return to normal life is on the horizon. The data and research, is at this point, on our side of outside freedoms. “

But St. Timothy didn’t respect Stall’s point of view. After Stall raised continued concerns about his son, Sebastian, Stall received a notice that his child had been disenrolled from the school, because they were frustrated and they had no answers.

Matters of school administration are within the purview of the Head of School who makes the final determination on issues such as this. In this instance, Mr. Tinnesz has kept the Board informed of your correspondence and communication over the past several weeks, and he has conferred with school counsel on the determination to terminate enrollment.

This determination was not based on any aspect of Sebastian’s performance, skill, or achievement. Mr. Tinnesz has shared that Sebastian is a good student, reader, thinker, and friend to others who will be missed at St. Timothy’s.

Unfortunately, this determination results from the inability to establish and maintain a constructive or productive parent-school partnership after extensive, repeated communication and explanation of the School’s health and safety protocols.

Enrollment was cancelled according to the terms of the contract, and there is nothing in this circumstance that would merit mediation or arbitration.”

Over and over Stall has been canceled, marginalized, and put off. Granted the officials we have seen in this story are also trying to do their best, it appears, but where is the authority who can help end these conflicts from happening. Is fighting- our new normal?

Now all Stall has is the media. It begs the question- who thinks coming up with a legal policy about masks is in the better interest of North Carolina, and of America? We deserve better.