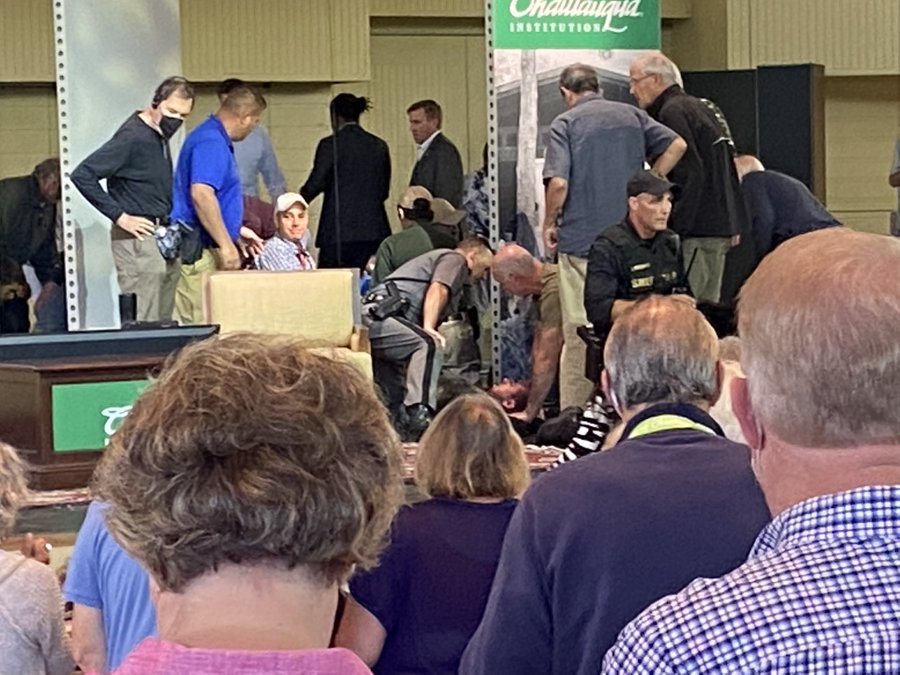 The award winning novelist Salman Rushdie has been attacked in New York. Many Muslims accused Rushdie of blasphemy or unbelief and in 1989 the Ayatollah Ruhollah Khomeini of Iran issued a fatwa ordering Muslims to kill Rushdie.

He was stabbed in the neck while sitting on stage just as he was about to give a speech.

His attack is Islamic.

Sayyid Ruhollah Musavi Khomeini, also known as Ayatollah Khomeini, was an Iranian political and religious leader who served as the first supreme leader of Iran from 1979 until his death in 1989.

Khomeini was the architect of the Iranian Revolution and the first leader (rahbar) of the Islamic republic established in 1979. He articulated the concept of velāyat-e faqīh (“guardianship of the jurist”) using a historical basis, which underlay Iran’s Islamic republic.

A fatwa is basically a legal pronouncement. It is the opinion of someone called a mufti; that is an Islamic legal scholar who is capable of pronouncing his judgments, his opinions on any kind of legal issue with regard to Islam.

A witness at the scene said the assailant was detained after rushing towards the 75-year-old and knifing him.

Rushdie was flown to hospital and his attacker is in custody. His condition remains unclear.

Rushdie is best known for his fifth book, The Satanic Verses, which prompted a fatwa against him in 1989. But over the past 40 years he has published 16 others, including Midnight’s Children—the winner of three Booker awards—and his latest novel, Two Years Eight Months and Twenty-Eight Nights.

Video footage taken inside the auditorium captured chaotic scenes as people rushed on to the stage to help Mr Rushdie.

Pictures showed him being given CPR by members of the audience.

The incident happened at the Chautauqua Institution, about 55 miles southwest of Buffalo in a rural corner of New York, which hosts a summer lecture series.

The interviewer suffered a ‘minor head injury’ and a New York state trooper ‘assigned to the event immediately took the suspect into custody’.

A venue spokesperson said: ‘We are dealing with an emergency situation. I can share no further details at this time.’

While the attacker’s motive remains unclear at this stage, the author has been a target for Islamists ever since he released the novel The Satanic Verses.

Numerous posters on social media reminded people of what radical Isma is about :

Lauded by critics, the 1998 book, which was partly influenced by the life of Mohammed, was attacked by authoritarian Muslims leaders, most notably the Iranian ayatollah.

In 1999, the late Ruhollah Khomeini ordered his followers to kill Mr Rushdie, a pronouncement which meant he required 24/7 police protection.

He spent years in hiding after the order was made and police have uncovered several plots on his life.

While no longer officially backed by the Iranian government, the country’s supreme leader has never withdrawn the fatwa.

A bounty of over $3 million has also been offered for anyone who kills the author.

In 2012, a semi-official Iranian religious foundation raised the bounty for Rushdie from $2.8 million to $3.3 million.