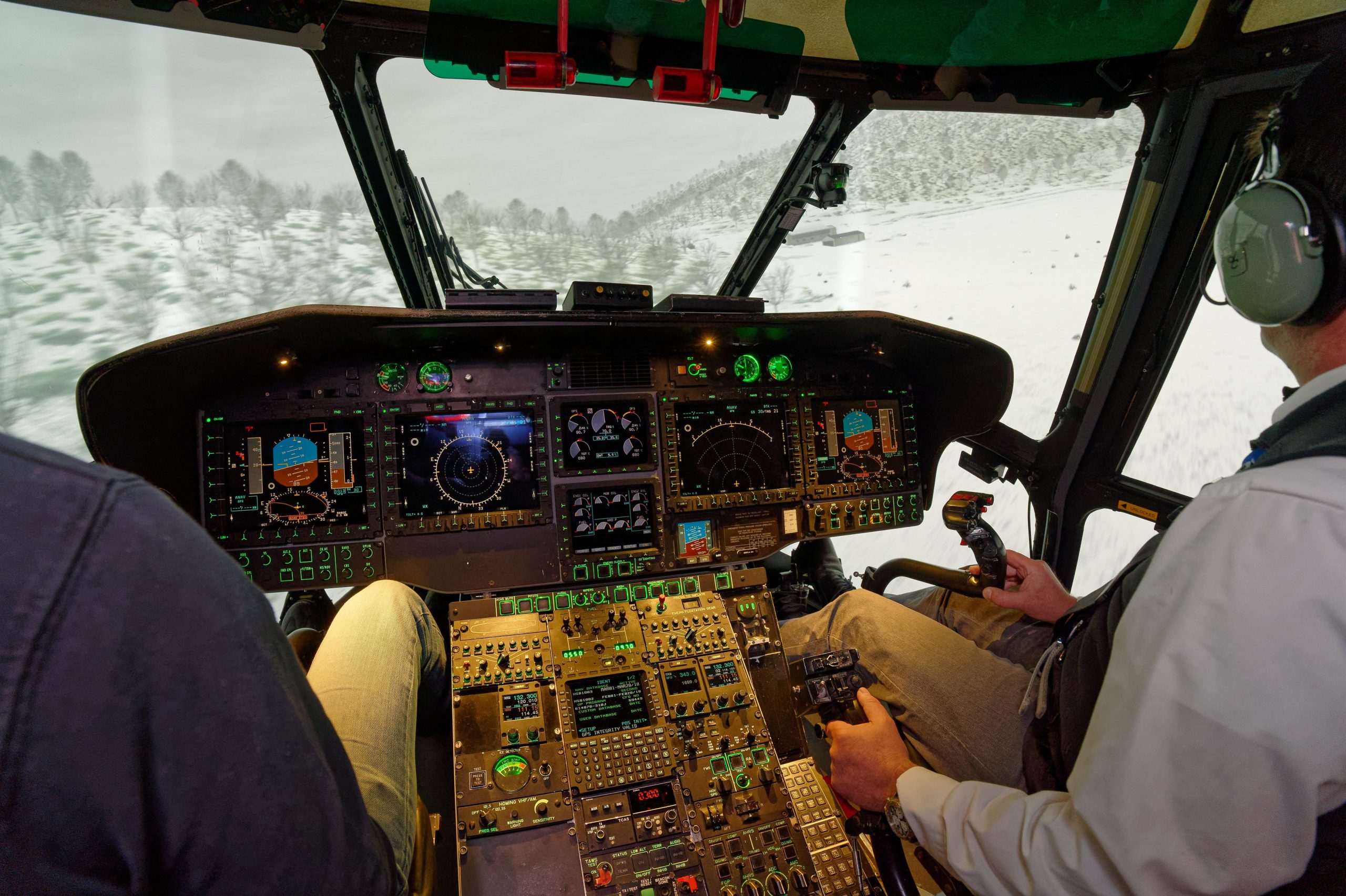 Jeff Rainforth is an independent investigative reporter who, earlier in October, was on the Southern border of the US and photographed what he identified as ‘Ukrainian/ Russian’ lettering on a helicopter that appeared to be in a pattern of training.

Ben Bergquam, the host of Law and Border on Real America’s Voice, caught it, and highlighted the irony, laying the blame for such hypocrisy- of training pilots to protect foreign borders- while the US suffers from open borders- at the feet of Democrat Joe Biden.

This is what we know, the US borders are a disaster, and the US is heavily invested in supplying military aid to Ukraine.

And the US trains pilots.

The USA is one of the top countries for flight training. It is home to some of the world’s oldest and most reputed universities and training institutions- but how much sense does it make that the US is training helicopter pilots to protect the border of Ukraine while allowing the border of US to wide open?

We know that the open border is causing historical problems for the US, based upon a press release by Senator Thune’s office:

“The longer [President Biden] continues with his de facto open-border policies, the more individuals are going to be encouraged to attempt the dangerous journey across our southern border.”

Click here or on the picture above to watch the video.

WASHINGTON — U.S. Sen. John Thune (R-S.D.) today discussed how the Biden administration’s disastrous open-border policies have enabled out-of-control illegal immigration and created an unprecedented humanitarian and security crisis at the southern border. Thune noted that there were more than 2 million individuals apprehended attempting to illegally cross the southern border in the last fiscal year alone, the highest number ever recorded.

Thune’s remarks below (as prepared for delivery):

“Mr. President, last Friday, President Biden said the following during a speech: ‘And we have a process in place to manage migrants at the border.  We’re working to make sure it’s safe and orderly and humane.’

“‘Safe and orderly and humane.’

“I have to ask, has the president visited the border lately?

“In fact, other than a drive-by of the border when he was a candidate for vice-president – and by drive-by, I mean his motorcade literally drove by – the president has never visited the border.

“Although I have to say, even reading the news should be enough to make it clear to the president that the situation at the border is neither safe, nor orderly, nor humane.

“Mr. President, in case the president isn’t clear about what’s happening at the border, let me just read from one news story from last week – this one from NBC News.

“‘A new surge of migrants … is overwhelming the Border Patrol and shelters in El Paso, Texas, where nearly 1,000 have been released near bus stations over the past week in hope that they will find their own way to their next destinations in the U.S.’

“And yet another news outlet reported: ‘El Paso County Sheriff sounds alarm over Border Patrol overwhelmed due to migrants.’

“That article goes on to say, and I quote: ‘Sheriff Richard Wiles stated Thursday, ‘This incident raises a law enforcement concern because Border Patrol is so overwhelmed, undocumented immigrants may be released into communities with minimal or no screening.’’

“Mr. President, does any of this make the situation at the border sound safe, or orderly, or humane?

“Mr. President, the Biden administration has been characterized by record-breaking waves of illegal immigration across our southern border.

“And I mean ‘record-breaking’ quite literally.

“And as for fiscal year 2022 – well, we exceeded last year’s record-breaking number of apprehensions in June.

“The final count of apprehensions for fiscal year 2022 will be well over 2 million.

“And, Mr. President, those numbers only count migrants who were actually apprehended.

“CBS News reports that there were, quote, ‘an estimated 660,000 successful unlawful border entries that did not end in an arrest in fiscal year 2021, according to unpublished DHS figures.’

“Mr. President, I don’t have to tell anyone – except maybe congressional Democrats and the White House – that these kinds of numbers have resulted in scenes of near chaos at the southern border.

“Who can forget the scene of 10,000 migrants camped under a bridge in Del Rio, Texas, last September?

“And just in case anyone is thinking things at the border have substantially calmed down, here’s yet another headline from this month, this one from the Dallas Morning News, and I quote:

“‘Overcrowded processing center has Border Patrol releasing more migrants on El Paso streets: Migrants are being released from a facility filled at 3 times its capacity.’

“Mr. President, over the past few months, the governors of Texas and Arizona have been sending some illegal migrants to places like New York City and Washington, D.C.

“There has been a predictable outcry.

“But what is so striking about this situation is how upset these places seem to have become when dealing with just a tiny fraction of the situation that border communities and border states have to deal with on a daily basis.

“Mr. President, while I’m in no way dismissing the challenges of dealing with thousands of illegal immigrants, let me just put this situation in perspective for a minute.

“Mr. President, for a party that likes to pride itself on compassion, the lack of compassion Democrats and the White House display on this issue is really astounding.

“Even after catching a tiny glimpse of what it’s like to deal with an influx of illegal immigration, Democrats have apparently zero compassion for the border communities and states that have to somehow manage the arrival of thousands of illegal immigrants on a daily basis – along with all the logistical and security challenges that involves.

“And there are real security challenges.

“Certainly many of the migrants crossing our southern border illegally are simply looking for a better life – even if they’re trying to circumvent legal pathways to enter – but there are also a lot of potentially dangerous individuals coming across our border and passing through border communities.

“In one recent week, Border Patrol agents in the Rio Grande Valley Sector along the southern border arrested 21 gang members, two sex offenders, and three migrants with prior convictions for various crimes.

“And the White House and Democrats don’t just display a lack of compassion for border communities.

“They also display a real lack of compassion for the individuals attempting to enter our country illegally.

“There is nothing compassionate about an immigration policy that encourages individuals to come here illegally – with all the risks that entails.

“Mr. President, earlier I mentioned a border town that was seeking increased morgue facilities because it was dealing with the bodies of so many individuals who had drowned while attempting to enter this country.

“Deaths at the southern border have surged under the Biden administration – undoubtedly because the administration’s lax immigration policies and obvious lack of concern about securing the border have encouraged individuals to attempt to come here illegally.

“According to Department of Homeland Security numbers that have been reported, 748 migrants have died at our southern border so far this fiscal year.

“That is a lot of lives lost, Mr. President.

“Mr. President, one illegal immigrant speaking to a news outlet this month said of the border, and I quote, ‘It’s open, not closed.  The border is open. … Everybody believes that the border is open.  It’s open because we enter, we come in, free.  No problem.’

“That is the message that President Biden’s immigration policies have conveyed.

“And the longer he continues with his de facto open-border policies, the more individuals are going to be encouraged to attempt the dangerous journey across our southern border.

“There was also, of course, an $80 billion funding infusion for the IRS – a majority of it allocated for more IRS audits and increased enforcement, including the hiring of additional IRS agents.

“Nowhere were there any resources for addressing the crisis that has been raging for more than a year now at our southern border.

“During debate on the bill, Republicans gave Democrats five opportunities to vote for amendments aimed at providing resources to secure the border.

“Democrats rejected all of them.

“Apparently Democrats are willing to spend a lot of time and effort – and government money – on their Green New Deal and finding new ways to collect taxpayer dollars to help fund their big-government spending plans.

“But when it comes to protecting Americans and ensuring a humane situation at our southern border, Democrats just can’t be bothered.

“Mr. President, the situation at our southern border is appalling.

“And if the president really had any interest in making the process at the border “safe, orderly, and humane,” he’d be making securing our southern border a priority.

“Unfortunately, given his record so far, I think it’s more likely that we’ll see the scenes of chaos – and human suffering – continue.

“Mr. President, I yield the floor.”

The US government has supplied military aid to Ukraine for them to protect its border:

The Pentagon has delivered five Mi-17 helicopters to Ukraine’s armed forces but is still working on transferring 11 more of the promised aircrafts along with other military aid.

A senior U.S. defense official told Foreign Policy that the five Soviet-era helicopters are in Ukrainian hands. The delivery comes months after the White House first signaled it would send the helicopters to Ukraine, later committing more in a recent aid package.

White House press secretary Jen Psaki said in January that it intended to deliver Mi-17 helicopters to Ukraine as Russia amassed troops along the country’s border. The helicopter can be used as a twin-turbine transport copter and an armed gunship.

The helicopters were originally purchased to help prop up Afghanistan’s military. But after the country fell to the Taliban, the White House identified the Russian-made aircrafts as a good option to help Ukraine’s military.

Earlier in the conflict, the U.S. committed the five copters, as well as over 600 Stinger anti-aircraft systems, 2,600 Javelin anti-tank systems as well as other weapons to help Ukraine.

The Pentagon in April approved another $800 million military aid package to help Ukraine as Russia pivoted to the country’s east and west after failing to take capital city Kyiv. That package committed another 11 of the Mi-17 copters, along with other weapons.

“We’re doing the best we can to make sure that Ukraine has the capabilities it needs in the moment, right now with the fighting in the Donbas in the south, to better defend their sovereignty,” Pentagon spokesman John Kirby told reporters during a briefing Monday.

The five Mi-17s were in Ukraine for overhauls under a NATO Support and Procurement Agency contract, Pentagon spokesman Marine Corps Lieutenant Colonel Anton Semelroth told Newsweek in an email. The helicopters were officially transferred in February, he said.

While the remaining 11 copters are scheduled to be delivered as part of last month’s military aid package, Semelroth did not provide an exact date for when they’ll be passed to Ukraine’s military.

The Pentagon says that as of April 22, the U.S. had committed more than $4 billion in military aid since President Joe Biden took office. That includes $3.4 billion since Russia began its invasion on Ukraine on February 24.

Kirby said on Monday that a majority of the 90 of its 155mm howitzer artillery weapons promised to Ukraine had been delivered.

“This is going to get stronger and rougher and what really needs to happen is, Ukraine is not asking for American men and women to fight, all they’re asking for is the weapons to defend themselves,” McCarthy said in an interview on Fox News Sunday. “If we would have taken those actions earlier instead of waiting till after Russia invaded, they probably never would’ve invaded had we done that sooner.”