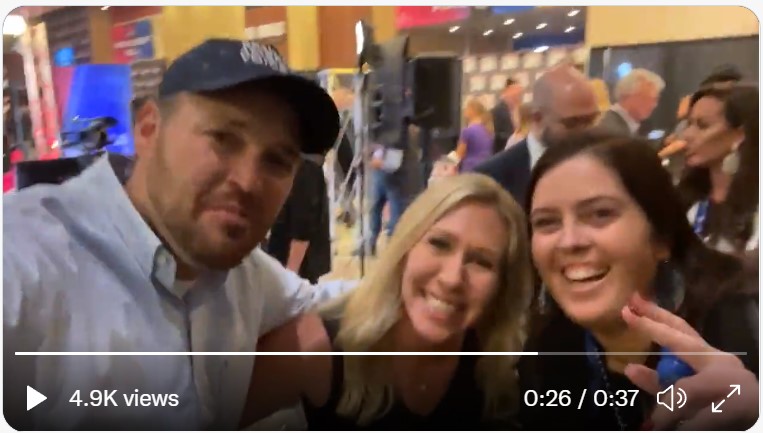 Ben Bergquam is a long-time associate and friend of US House Rep. Marjorie Taylor Greene. A brave Populist warrior, Greene has told people- including War Room Pandemic audiences and political icon Steve Bannon- that Ben is one of the best journalists and pundits she knows.

“Follow this guy,” Green said, pointing to Ben. “Support him and pray for him,” she said into the camera.

Recently, Bergquam ran into Greene at the Turning Point USA event in Arizona and posted live footage of their meeting. Bergquam is a reporter on the southern border for Real Americas Voice, and a frequent guest of Steve Bannon’s on the War Room. Bannon highlights the live and courageous reporting Bergquam is known for bringing to the show.

“The liars on the left are not going to win, ” Bergquam said embracing Greene, and gathering in close to make space for another associate and friend, who was nearby.

Making a quick appearance in the video clip was Captian Maureen Bannon, an Army veteran and athlete, also a co-host of the War Room. Maureen Bannon is developing her own personal reach in political journalism that is growing rapidly as she follows in the footsteps of her Dad. She brings her own brilliant perspective of current events and politicians as that of a young, female veteran.

Here is what you need to know:

Bergkamp is often seen at the best events, with the leading figures in politics, and he approaches every single situation with a humble perspective so audiences can really feel like they are a part of his scene. As if they are just riding along with him like his sidekick.

To keep track of Ben’s work, follow him on GETTR and Twitter @BenBergquam and on Youtube Frontline America and check out this happy reunion of America First Warriors.