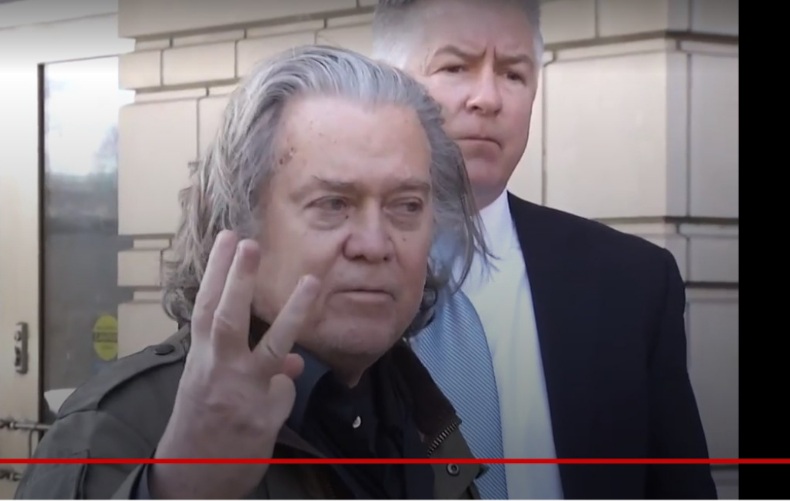 Jeremiah 51:12
Lift up a signal against the walls of Babylon;
Post a strong guard,
Station sentries,
Place men in ambush!
For the Lord has both purposed and performed
What He spoke concerning the inhabitants of Babylon.

A former White House strategist for President Donald J. Trump is being hounded by the lapdog media, who are cheering on his demise at the hands of the extreme partisan US House committee on January 6th, 2021. Both groups hope that- once and for all-they will finally be able to capture and punish their competitive nemesis.

“The Judge in there was very fair, but this is all noise,” Steve Bannon said on Wednesday to a small gathering of media as he exited a courthouse with his legal counsel.

CNN reported on the details of the day at the courthouse for Bannon:

“A federal judge ordered the Justice Department to turn over certain internal documents that may relate to its decision to prosecute Steve Bannon, the former adviser to Donald Trump who has been charged with contempt of Congress after his failure to comply with a House committee subpoena.”

It was a good day for Bannon, but he had a steel cold focus.

What happened earlier was the real news. Bannon laid out his rescue plan, reminding people his battle is for the benefit of all of America. Bannon, a Naval veteran, appears confident in his convictions that he is the one defending the US Constitution more than anything the curiously seated Democrat in the White House- Joe Biden, has ever done.

Exiting a car with his crew before the hearing, Bannon stopped to send a message to his supporters, which was posted on GETTR, where many of his War Room fans congregate.

“Hey how you doing?” Bannon said, reaching his hand out to shake with the lapdog media who were following him around on Wednesday.

Then Bannon turned his signature personality on and said: “For everyone watching, and everyone on GETTR, this is all noise,” he said, raising his hands to show how big the area was that full of nothingness in Bannon world.

“Signal is three things, and only three simple things.” he said, which to his posse means ‘pay attention here’.

Holding up his first finger, “We are dedicated to taking down the illegitimate Biden regime and stopping it in it’s tracks, every day of the week, and we are doing a pretty good job,” Bannon said.

“Number two is this November we want to have a huge massive turnout to destroy the Democrat Party as a national political institution – root and branch-from the Rio Grande Valley to all the way up to Royce White running against Ohmar in Minessota. We will have a populist-nationalist uprising at the polls to take down the Democrat Party, ” Bannon said with directness.

After Bannon had his hearing and exited the courthouse, he appeared again with his legal counsel and was asked by a reporter why he was calling anything “noise”.

“Yeah it is noise,” Bannon said.

“Do you recognize the significance of Jan 6th. That it was a riot that it was violence,” the reporter pressed, interrupting Bannon.

“This has nothing to do with Jan 6th. All of this is noise,” Bannon said again. “What is essential to my work, that I do every day taking down the illegitimate regime of the Biden administration. I do not consider them legitimate, I have said this many times, I think the election on November 3rd was stolen and I have gone out publically – Day after Day after Day to say that,” Bannon said.

“Number two is to make sure that this November by an overwhelming vote, we destroy the Democratic Party and their political institution, which we will do. This is a national political organization,” Bannon said.

The reporter tried to interrupt Bannon and insist that Bannon was calling for violence.

“I said at the Ballot Box and you see how we are doing with Hispanics and with African Americans and Biden’s polls are at all-time lows- so don’t put words in my mouth and don’t try to spin it. I have said at the Ballot Box we are going to take a 100 seat majority and turn things around,” Bannon demanded, drawing an image ,for me, of a ship, USS American Republic, on a stormy sea being turned away from the pull of a disastrous and drowning tide.

“We are going to take down the Chinese Community Party, ” He said, “everything else is just noise.”

I have to admit- what I heard.. was the echo of a patriot… at the ship’s bridge, a watchman and calling out the dangers ahead..

The Oath of Enlistment (for enlisted): “I, _____, do solemnly swear (or affirm) that I will support and defend the Constitution of the United States against all enemies, foreign and domestic; that I will bear true faith and allegiance to the same; and that I will obey the orders of the President of the United States and the orders of the officers appointed over me, according to regulations and the Uniform Code of Military Justice. So help me God.”

I see Bannon.. a patriot- Like Sam Adams- who can not take orders from an illegitimate ruling-POTUS.. and yet who is vigilant to maintain his continuous watch over the dragons and the stormy waters of a struggling nation- ready to report the hazards he sees ahead.

The question is- is anyone listening?