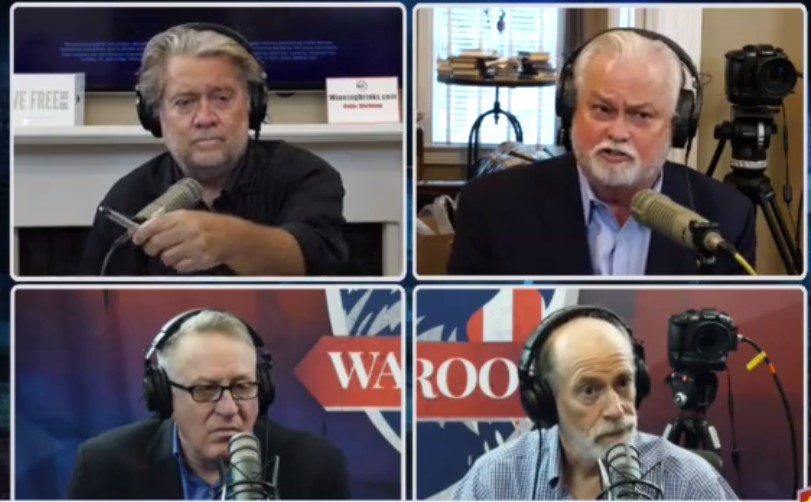 Americans need to be more polarized, not less polarized because the left are hardcore Marxists and Communists, says Author of White House Reds, who is the purveyor of Key Wiki, a website dedicated to tracking the behavior and organizing efforts of covert political movements worldwide, and a guy who is focused on CRT, Stacey Abrams and Communists in DC.

“The candidates on the left are unified behind Maoist teachings and we see that with the Rainbow Coalition, run by radical Jesse Jackson.  They push Identify politics and they are very much like the Black Panther movement of the past,” Trevor Loudon told me recently at one of our lengthy chats about the left.

Loudon is an author, columnist for Epoch Times and dubbed the “Communist Hunter” by Steve Bannon. He was on the WarRoom Pandemic podcast on Wednesday, hosted by Steve Bannon, and spoke about Critical Race Theory, which he often speaks out against on behalf of school boards (to the left’s dismay),  and about the likelihood that China hacked the 2020 US Presidential election.

Key Point: Loudon, a longtime world expert on Communist and Marxist infiltrations, says the USA does not have to accept a Communist Revolution and Marxist revolt in America. We have the power to make it stop and reclaim our liberty and world standing.

“They knew if they didn’t take down Trump would take them down like Regan took down the Communist Party and they had voter registrations going on. The key into the United States was Big Tech.” Loudon said about the possibility that the Chinese stole the 2020 Presidential election.

“Yes we have 80 million Trump voters, 20 million who wish they were Trump voters and God. We have the numbers to do it, we have to have the will. What is lacking is the courage by our leaders, and we have got to force them to have that courage,” Loudon said.

“President Trump won on social conservative issues, that even Bernie supporters agreed with him on, like marriage, abortion illegal immigration, and religious liberty,” Loudon told me for an article in 2020.

“The concern is the progressive left’s ability to organize voter turn out from infiltrating the right, or from intimidating groups of people such as Black voters, with scare tactics based on things that are not true,” he said.

Bottom line: In a recent video Loudon shows exactly what he means when he talks about the “Southern Stragedy” of the left, which will be boldly in effect for the 2022 elections:

“Most voters want to know what a politician is going to do for them and their family. The left is better at painting a picture that they will protect people, even though their policies show they are worse at actually protecting people,” Loudon told me.

Loudon’s work speaks out boldly about the ideologies of Democrat Presidential candidates, showing no fear at all, which has gotten him banned from Twitter.

Loudon, in his work, exposes the dangers of Socialism and Communist influences in American politics, especially in the Democrat party, and he had been warning for months that it was essential to understand these issues ahead of the 2020 elections.

The Democrat Socialists are even further left with their “Red Deal” than they were with their “Green Deal”, Loudon wrote for Epoch Times.

Loudon is the founder of  Keywiki, the world’s largest public database of subversive politicians, activists, communists, agitators, and out-and-out traitors in the United States.

“We call the left progressives and liberals, and they call us Tyrants, Racists and Nazis.  We need to start calling them what they are, Marxists and Communists,” Loudon told me.  “Republicans need to stand up for their values because they are the majority,” Loudon said.

Going Down a Rabbit hole:

Loudon has been warning the United States, speaking out against Marxism for a very long time: