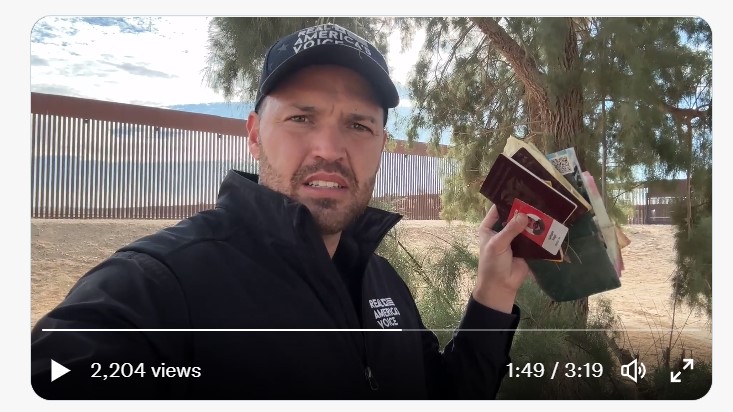 Ben Bergquam, the host of Law and Border on Real America’s Voice, is one of the few brave journalists who will show the American people what the Democrats and uniparty politicians in DC do not want us to see- and that is the consequences of what their open borders policies are doing to the safety of our nation.

You won’t believe what he witnesses on the border recently. It is tragic. This is the sort of thing that tells the story of an invasion…

At the same time, media reports show that Democrat Governor Katie Hobbs has prioritized an open and free border into the United States from her state, as she has ripped down a security perimeter; Bergquam is finding out that the third world is invading the US and he is recording the evidence independently.

“Deconstruction of the container wall at the southern border in Arizona has begun, video footage captured Monday morning showed.

Deconstruction of the container wall at the southern border in Arizona has begun, video footage captured Monday morning showed.

We covered that story here:

Then-Gov. Doug Ducey had the container wall constructed near Yuma over the summer to curb the migration surge. He agreed to have it removed after facing legal challenges from the Biden administration.

“My biggest fear is that the cartels and individuals from around the world see it as an invitation to crash our border,” Lines said. He also worries “that the human smuggling and the narcotic smuggling would escalate and destabilize this area to a point where it is dangerous for the citizens of Yuma.”

IN ANOTHER PART OF AZ

Bergquam was in San Luis, AZ, recently, and within 20 mins he had recovered numerous travel documents, passports and IDs have had been discarded in the desert area of the US Southern border and left as trash.

It is alleged that if these invaders have no personal documents, there is no way to trace their origins, their intentions or their where about once inside the country, leaving them to have an amnesty, start a new name, commit crimes, and face zero consequences at all.

As Bergquam discussed on Real America’s Voice with Dr. Gina recently with fellow journalist and Real America’s Voice-Oscar Blue Ramirez of Border Network News– the three talked about the number of invaders coming into the US through the border with Mexico is growing daily, while at the same time law enforcement has been pushed back further and further from providing safety protocols for citizens.

It all seems to be a well-devised plan by the Democrats and their enablers to transform our country into something we won’t recognize: