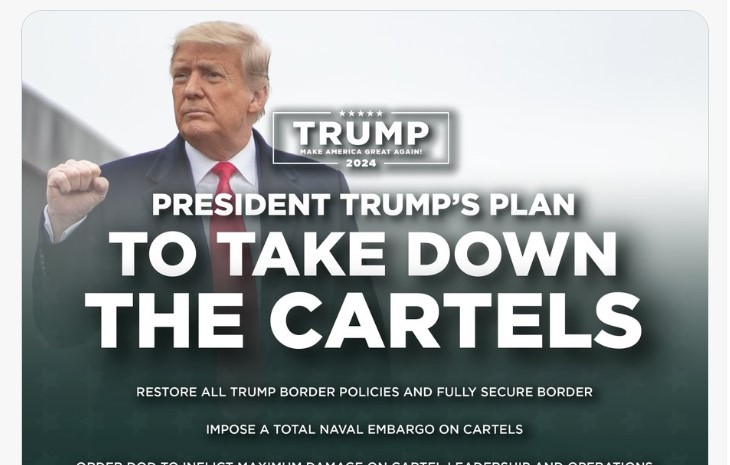 President Donald J. Trump released his plan to take down the drug cartels saying he would do the following: restore all Trump border policies, fully secure the border, and impose,a total Naval embargo on cartels.

Trump said he would order the DOD to inflict maximum damage on cartel leadership and operations and designate cartels as foreign terrorist organizations.

He said he will choke off their access to the Global Financial System, get full cooperation of neighboring governments to dismantle cartels and will ask congress to ensure drug smugglers and traffickers can receive the death penalty.

He released a statement and a video on Thursday:

The Trump plan was unveiled ironically on the same day that Democrat Joe Biden showed he isn’t prepared to communicate to the American people on the very simplest of issues by incorrectly calling the CBP by the wrong name:

The contrast between Biden and Trump is shocking.

In a video Trump laid out a detailed plan on how to save the Republic, on the same day the US House was bickering over who would lead the body in the new Congress.

In the video Trump said:

Our country is being poisoned from within by drugs and by all of the other crimes that are taking place by the drug cartels who are waging war in America, and it’s now time for America to wage war on the cartels.

We will show no mercy for the cartels. Every day drug traffickers are using the waters of our region to ship their lethal poisons to America killing. In addition, to restoring strong border security, I will deploy all necessary military assets, including the US Navy, to impose the full Naval embargo.

I will order the Department of Defense to make the appropriate use of Special Forces, cyber warfare, and other overt and covert actions to inflict maximum damage on cartel leadership, Infrastructure, and operations. I will designate the major cartels as far and terrorist organizations. We will sever their access to Global Financial systems. I will also work to forge an unprecedented partnership with neighboring governments in our region.

Either we will get the full cooperation of other governments to stop this menace or we will expose every bribe, every kick back every payoff and every bit of corruption that is allowing the cartels to preserve their brutal reign and it is indeed brutal.

Finally, as I have said before, I will ask Congress to pass legislation, ensuring that drug smugglers and human traffickers receive the death penalty, the drug cartels, and their allies in the Biden Administration have the blood of countless millions of the hands.

Millions and millions of people are being destroyed, and when I’m back in the White House those drug kingpins and vicious traffickers will never sleep soundly again, we did it once and we did it better than anybody else has.

Never has there been a better border than we had just two years ago. It was strong, it was powerful, and it was respected all over the world. Now we’re laughed at all over the world and we’re not going to let that happen much longer.