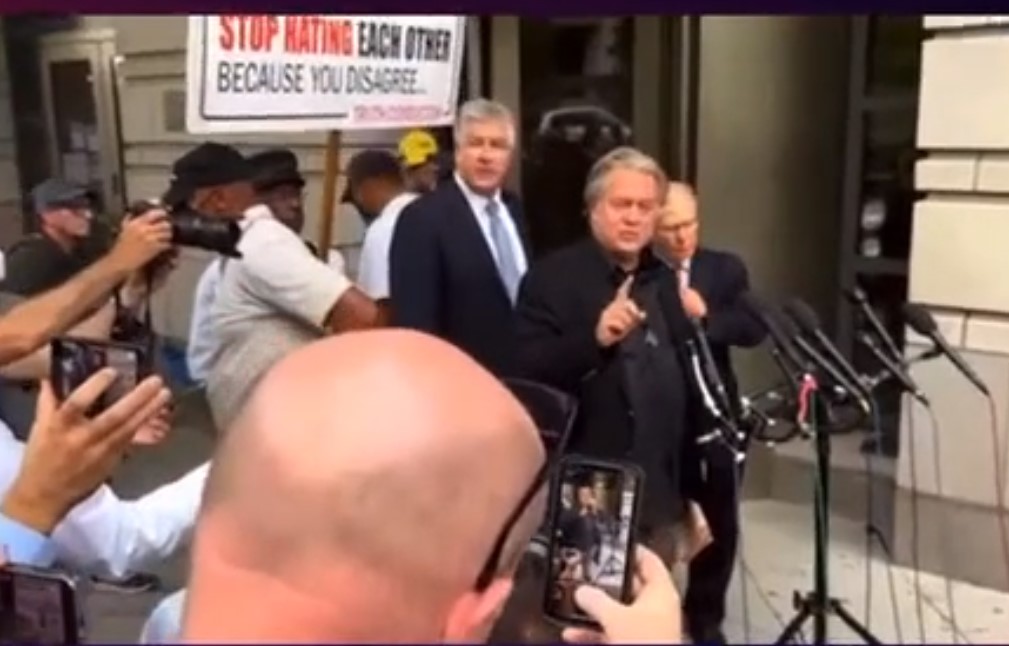 Bannon hasn’t changed his tune at all this whole time- he has stood firm and not waivered that President Donald J. Trump had powers given to him by the US Constitution called executive privilege- and that he had to take his lawyer’s advice and not go around Trump’s privilege.

Besides that- Bannon said on Thursday after the court day ended- in the past, when he had to testify in front of the crazy Never Trumper DC Swamp- Bannon declared executive privilege then, too- and everyone who wanted to hear from him had to work it out over with lawyers before he spoke.

Bannon reminded the media that he has testified for 50 some hours already- in front of House and Senate committees.

So he is not someone who thinks he is above the law.

Bannon makes a good point- how is this time any different? Bannon’s lawyer reminded the media that he said he would testify in Bannon’s first letter.

As mentioned, when Bannon left the courtroom on Wednesday on trial day 3, no one came to his trial and talked about the process of setting the terms that he would be able to speak.

Jack Posobiec reported that Bannon would not call any witnesses in his trial.

Outside of the courthouse, Bannon and his lawyers addressed the media.

We wrapped up today, as you saw. He said that he would testify in his first letter if he went before a judge and the judge ordered him he had to comply. It was as simple as that. He is not someone who thinks he is about the law or ignored a subpoena, and at all times, he communicated with them. Today he made a statement that once the judge cut out all the defenses in the case, he wasn’t unable ever to tell his story.

The story of this case is this- it is what I said from the first day. I think all of you should think about how it might have an impact on you. So you are a lay person you get a subpoena, and you hire an experienced lawyer; it’s not an intuitive process.

The lawyer tells you that executive privilege has been invoked, and you may not comply with that subpoena, not that you have a choice, not that you should think about it.

The lawyer tells you that you may not comply. I don’t think it’s reasonable to expect a non-lawyer or any other person- then say to the lawyer, you don’t know what to talk about.

I’m going to comply and disrespect executive privilege. Mr. Bannon respects the subpoena; he respects the Constitution and executive right, and the principles of separation of powers.

His view is that he is caught in the middle. His hands are tied, and that was the view of his lawyer. Therefore, it’s not his privilege to waive. If it were, you would have seen him speak.

You didn’t see him taking the Fifth Amendment privilege.

Bannon said that if he went before a judge and a judge ordered him to testify, he said-I told them he will testify. That is what he told them today.

That is, I want to testify because I want to tell the story of this case to other people also, but that wasn’t permitted.

I think what you saw today, one more time remarkably, this judge said something interesting- that it’s a great testament to this judge and his ability. It is about his thought process.

The primary defensive, on the advice of counsel, he said now for about the sixth time that his hands are tied by a, circuit decision from 1961.

Today said, he’s not sure that that’s right, the other day he said he doesn’t think the best decision supports modern-day jurisprudence on willfulness- and frankly not even with the traditional standard -with that he’s bound by that case. It’s going to make it very interesting going to forward.

Every single time it was the exact same way- it was an executive privilege and we engaged with them, and it worked it out in every time every single time.

I testified more than anybody else in the Trump administration, quite frankly, even more than McGann.

And once those guys, as of even came in and testified, so you heard it laid out today

By the way one last thing I stand with Trump and the Constitution.