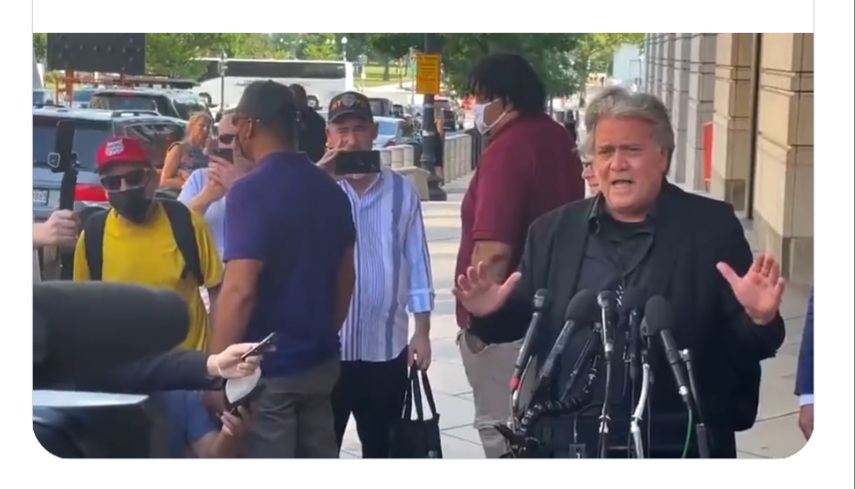 If there is one thing the left hates, it is the idea of free speech and today is just another example of how disgusting the crybabies on the left are- really.

While the media tried to cover up his statement and a lunatic leftist tried to blow a whistle to shut Bannon down- the message was heard loud and clear:

So, after Trial Day #3 Steve Bannon went to the mics outside the courthouse, where a large group of people was waiting to hear from him about his thoughts on the day. In most footage, all that can be heard is a little leftist in a black face mask- blowing his hidden whistle and trying to prevent Bannon from being heard. As people stared at the little tiny man with large breasts under his yellow shirt, who was blowing in and out so hard- he almost fell over creating a clown show for the circus- one set of mics did pick up what Bannon said.

And it is important that Bannon is heard:

Here is a partial transcript of what Bannon said:

“This is a show trial. It is a Moscow show trial like the 1930s. Why is Bennie Thompson not here in person? Do you think he really has COVID? Did anyone check at all, or all you all just standing here? Has Dr. Fauci come forward to say that Bennie Thompson has COVID? This is so absurd. It is completely and utterly absurd.

Are there no human beings anywhere that will admit to anything about setting any dates? Now where is Bennie Thompson? Last thing. And you heard it today- I stand with Trump and the Constitution. Trump won and Biden is illegitimate.”

Try as that little leftist might- we were able to get most of what Bannon said over the insane whistle.

The little whistle bee-man is the same dude who assaulted Liz from Right Side Broadcasting at another press conference for political prisoners of Jan 6th, in 2021.