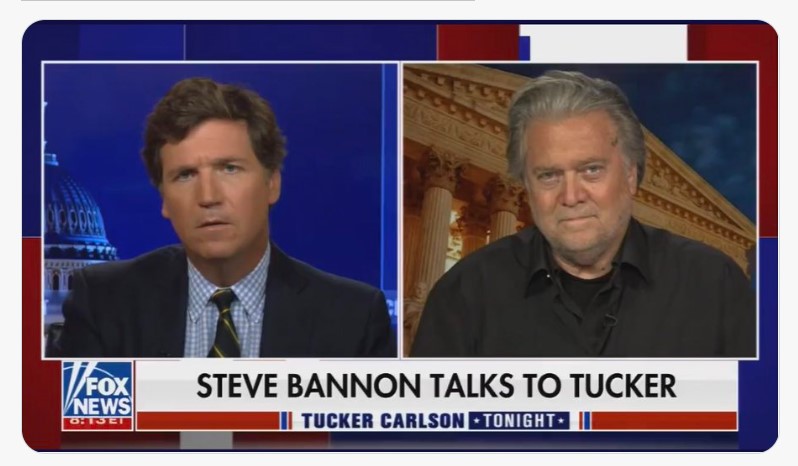 Steve Bannon appeared on FOX News with Tucker Carlson just house after being found guilty of contempt of congress and gave a road map forward for the country, which is one of the most important interviews of the year.

BANNON: As you can tell, the Democrats are completely lawless and look how they run this committee; there’s no ranking member. There’s no minority counsel. It’s not like the traditional hearings that have galvanized the nation of the pass and Tucker. I think it’s one of the reasons that it hasn’t really had that big of an impact. When they interviewed the people at on the trial, I think almost all the Working Class People don’t even know what is going on.

Your show with people like Darren, BT, and revolver, and Rahem Kassam have done actually more original reporting on what we’ve got to know about. You get to the bottom of things. That is why we need a commission or committee on January 6.

What happened to the Pentagon with the National Guard. All of this about Ashli Babbitt, all of this, we have to get to the bottom of it.

You know, we wanted decision-makers to come over to my trial and actually go on record under oath and say exactly what happened here, and they wouldn’t they hid behind executive privilege.

A hundred percent, I thought this would happen. Remember these guys all thought they were going to change China and the Chinese Communist Party? They’re taking on the aspects of the authoritarian State and State capitalism combined. This is how the elites to run this country. This is exactly how they want to run it.

I had top lawyers, that I can rely on the on their opinion. They took away every possible, defense that somebody can have as a defense of law.

Okay, that’s why I didn’t we didn’t even put on a defense, we just had an opening argument and closing argument.

This is where they’re going. I mean, you document it better than anybody. But no people have to understand, this is just one fight in an entire process and that’s why it’s absolutely incumbent that Liz Cheney is defeated A couple of weeks in Wyoming by the Republican party and by conservatives, and by Maga, and then later, we’ve already got Kinzinger out.

We got another member of the committee. I things are retired again to defeat Lauria, but we must have a sweeping victory in the house and then Republicans have to have the stones to put on a real hearing. And by the way, let the Democrats have them on a ranking member. Let him have a counsel and just get to it. If you look at what Darren Beatie, he’s done on your show alone. It’s outrageous what the public doesn’t know about this week for the good of the system.

I think the laws are with us on a number of situations. I think some of this is really going to be adjudicated, maybe even higher than the appellate courts.

I’m feeling very confident that we’re 100% right on the law. But I’m going to fight this all the way and this is not the only battle were fighting.

Look, they’re trying to shut you down there. Trying to throw off Fox anchors, they’re coming for everybody and people have to understand right now, that this an ideological war and we cannot lose the, the fate of the country is over the next couple of years.

CARLSON: Did you think during the course of this trial, maybe you should call Eric Holder and Louis learn, both of whom live in Washington and just say, like, how could you beat this? Like, what’s the secret sauce here?

BANNON: The Secret Sauce Is they are in power. Let’s be honest. The Republicans have been controlled opposition. That’s what has to change.

CARLSON: That’s for sure.

BANNON: It’s November and we have to deliver a crushing blow to this Democratic party apparatus, but then we have to really govern. And I mean, govern on offense. Every Committee in the house has to be an oversight committee. We have to go after the Biden administration, which is illegitimate.

You can tell they’re illegitimate. Look how the Saudis mock us to our face. Look at the Chinese Communist Party have absolutely no respect. They understand that he is illegitimate. We have to get in there in January. Every committee has got to be an oversight committee, and we have to have a real Jan. 6th committee, including to get to the staffers now and see about the lies and misrepresentations they put on National Television to defame people.

I would tell the January 6th staff right now, preserve your documents because there’s going to be a real committee, and this is going to be backed by Republican Grassroots voters. And MAGA says, we want to get to the bottom of this, for the good of the nation. We have to know everything that went on.

All the intelligence reports exactly what went on what was raised involvement was FBI asset involvement. I mean to stuff look just go to Revolver and see Darren Beattie on your specials and weighs on your when he’s on your the Tucker Carlson show, right there alone leads you to all types of inquiry that we have to get to the bottom of it.