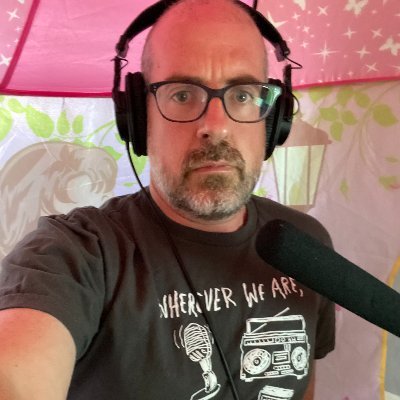 The Christmas-time Bergquam video  was about his experience, from his own point of view, about the COVID virus and it was so anti-establishment that it made the NPR propagandist push  Fake News – also called lies– to try to frame a better narrative and to push the leftist point of view about COVID and it’s cures.

“My Christmas gift was losing my [sense of] taste and smell and having a 105-degree fever, and just feeling like garbage,” Bergquam said in a Facebook video that he shot as he lay in a California hospital.

Brumfeil then calls Bergquam’s claims about what made him feel better- a … wait for it.. “conspiracy theory”.

“But fueled by conspiracy theories about vaccine safety and alternative treatments, many on the political right incorrectly believe ivermectin is a secret cure-all for COVID. As millions of Americans fell ill with COVID last summer, the Centers for Disease Control and Prevention reported ivermectin prescriptions were at 24 times pre-pandemic levels. The agency says prescriptions again rose during the latest omicron surge.”

Brumfeil then acted like a stalker who is monitoring Bergquam, by highlighting Bergquam’s post about the article.

So we know Brumfiel knows how to locate people. 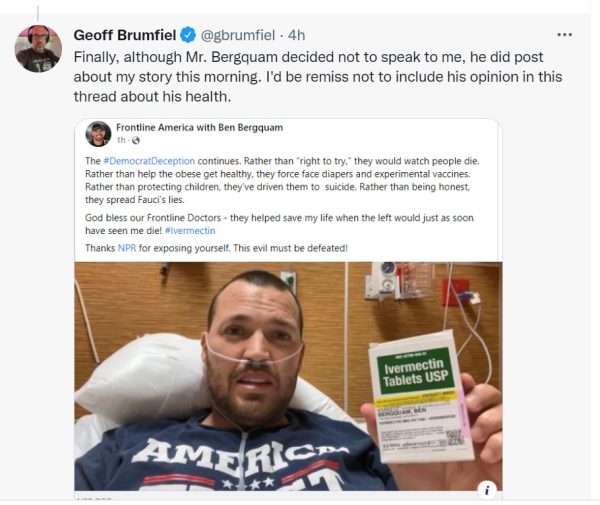 HERE IS THE BIG LIE

Bergquam released a video Wednesday, calling NPR out saying no one from NPR contacted him: “This video goes out to NPR, since I have yet to hear from them…” Bergquam said.

I did contact Brumfiel and ask for a statement about why he lied:

Unfortunately, Brumfiel did not respond to our media request. We will update if he ever does respond or explain why he lied.

IS IT TIME TO DEFUND NPR?

According to their Wikipedia page, the American taxpayers may want to start thinking about making an act of Congress to address the level of fake news and leftist propaganda that the taxpayer-supported group, NPR, pushes out.

“National Public Radio (NPR) is an American privately and publicly funded non-profit media organization headquartered in Washington, D.C. (often called the “mothership” of NPR), with its NPR West headquarters in Culver City, California.[2] It differs from other non-profit membership media organizations such as Associated Press, in that it was established by an act of Congress,[3] and most of its member stations are owned by government entities (often public universities). It serves as a national syndicator to a network of over 1,000 public radio stations in the United States.[4]“

This slam by NPR’s Brumfeil- on Bergquam, over a Facebook video under the protection of Free Speech, about Berquam’s personal experience with being sick and recovering- is just one of many institutional attacks on the 1st amendment, and on anyone who isn’t a radical Marxist.