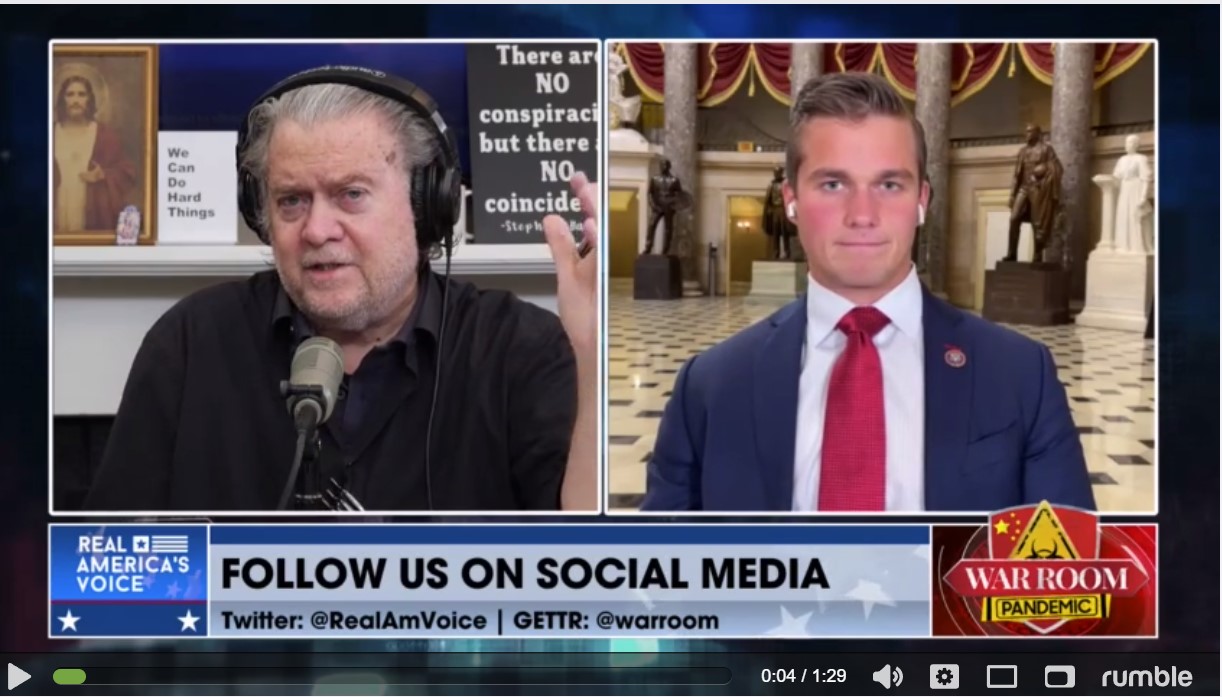 At least one US House Rep. is making so many waves in Washington DC that the established political elites on both sides of the aisle are trying to sink his opportunity to serve his constituents- and drive his political career into the grave over their hatred for him.

“We need to get rid of the Republicans who are afraid of rocking the boat.  I say- the boat is sinking, it is time to save the Republic!,” US Rep. Madison Cawthorn (R-NC)  told War Room Host, Steve Bannon, on Wednesday.

Bannon, who has been instrumental in organizing the worldwide  Populist movement that propelled ‘firebrand’ candidates like Cawthorn into the public’s view served as  White House Chief Strategist,  so he understands the established order of politics very well. ‘

Bannon has been attacked for years by the establishment-so he especially understands how politicos play against President Donald J. Trump’s “MAGA” or “America First” movements.

And without media minds like Bannon and firebrand political candidates like Cawthorn, the left-leaning establishment would have gotten away with all of it, because the US faces a determined set of usurpers who love to play lawfare and destroy people, and shut down our Republic.

During the interview, Bannon talked to Cawthorn about the unprecedented usurpation by leftist players like attorney Marc Elias to get rid of Cawthorn in a massive scheme to deny Cawthorn a chance to run for reelection in 2022.

The Hill Covered the attacks on Cawthorn, by Elias:

“The left is after the American people, but MAGA fighters in Congress are in the way. The Washington elites are panicked. Their savior, Joe Biden, is a withering, blundering failure,” Cawthorn said recently.

Cawthorn appeared with Bannon to continue the Elias attacks and talk about the left’s narrative that all Republicans are nothing more insurrectionists.

Elias is attempting to frame Cawthorn as an insurrectionist over the events of Jan. 6th to stop Cawthorn from being on the ballot because- the truth is, the left can not beat anyone fairly at the ballot box; the left’s socialist demands are not popular.

And the establishment in DC doesn’t mine using the left’s power grabs for their own power grabs and usurpations.

“I am fighting back against the radical left who are trying to take over America and run roughshod over the US Constitution, ” Cawthorn told Bannon.

“I am trying to save my generation from the dangers of socialism,” Cawthorn said, and he is being attacked for doing just that by the DC establishment, which is both Democrats and Republicans.

IS THERE A ‘CIVIL WAR’ IN THE GOP?

If there wasn’t a civil war on Wednesday- there will be by Thursday if Cawthorn has anything to say about it.

“What are we going to do with an establishment like Mitch McConnell who mock MAGA?” Bannon asked Cawthorn

In the House, we are seeing a lot more people supporting America First- and I will get in trouble with leadership for saying this because there does need to be some conflict in the party because we need to get rid of the establishment,” Cawthorn said.