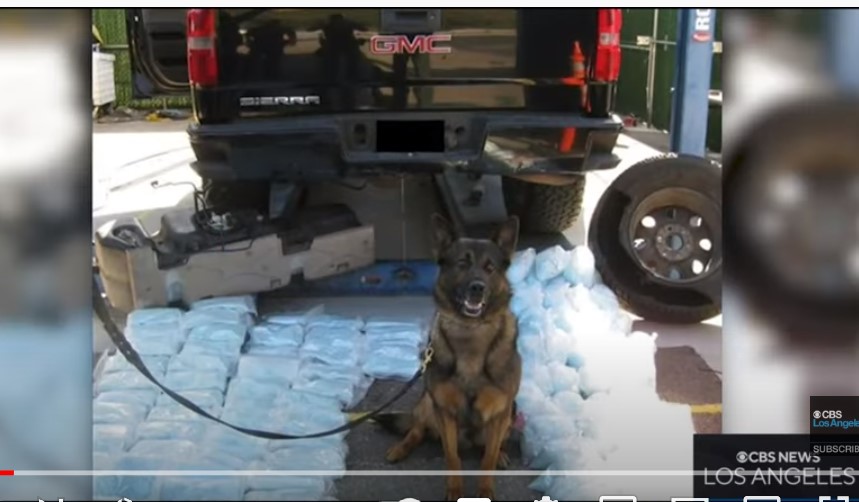 An alert border patrol canine stopped nearly 4 million dollars worth of fentanyl from entering the country this week. The K-9 alerted officers of the drugs, after an agent stopped a car near the Golden Acorn Casino in San Diego County on Monday. Agents found the drugs hidden in the gas tank and a spare tire. The driver was arrested and the drugs were turned over to the DEA.

One local reporter, who was talking about the bust said: The Mexican drug cartels are so scary right now, I think I should not to get too political, but you’re gonna have to ask me that question again in November because right now the current Administration and everyone in the Support Center says Biden has completely walked away from border security and given the cartel complete and total operational control. It’s getting worse on a daily basis. So without some significant policy changes at the national level, it’s looking a little looking pretty scary.

Here is a longer report:

LOCAL REPORTER: this is pretty scary because, you know, when the whole fentanyl crisis started flooding the United States, it came over in forms of powder and it was mixed with heroin and was mixed with a variety of things that the cartels had, but they have evolved into the pill world over the past several years and what they’re doing is they’re making counterfeit pills like Oxycontin like Percocet like Xanax and a variety of others.

They’re actually duplicating, you know, the prescription look and feel of that pill. They’re filling them with fentanyl and meth. And obviously, a lot of people are dying as a result. They think they’re taking one thing and they’re taking another.

This stuff is poison. And quite honestly, the cartels are murdering people over there over here by selling this stuff under the guise of being Oxycontin, but it’s actually fentanyl. So yeah, there’s been a couple of very big busts, the latest just a couple of days ago here in the East County, and I got a chance to catch up with the former Chief of the US border patrol for the United States border patrol.

He’s got some very strong thoughts and feelings about why this is all happening. So take a look, there is no limit to their evil and there’s no limit to the Mexican drug cartels greed, the latest evidence of that right here in San Diego County.

Thanks to an alert border patrol agent and a drug-sniffing dog. 250 pounds of fentanyl pills will not be hitting the streets and the carrier is behind bars and San Diego.

FORMER CHIEF BORDER PATROL: And a lot of people don’t understand it all comes from Mexico and from China support across the border. So this recent seizure £250.

Those two and fifty pounds of pills. The latest Evil Deed from the Mexican cartels making counterfeit pills that look like prescription pills. But the main ingredients are fentanyl and meth. According to the CDC more than 107,000 people died last year alone the United It’s from fentanyl-related overdoses.

The pills we understand are being peddled on the internet and I call it poison because unlike other narcotics smuggling from Mexico, it’s masked. These pills are made to look like normal pharmaceutical drugs that are legal in the US. If you had a prescription and they’re basically sold the people as such in the path of time that people don’t even know there’s fentanyl in it. So to me that’s poisoning it’s not just an overdose. In the case here, in San Diego.

REPORTER: Border Patrol questioned this guy a week ago and he appeared nervous. Now, we know why this time they stopped him. They found a spare tire and a false gas tank. Filled with poison, a hunch that paid off for an overwhelmed border patrol and was this massive amount of illegal immigration from across the border less than 30% of the agents are usually out on patrol at any given time nationwide.

So that’s the real threat. This was great police work on behalf of those agents. There was no Intel, they worked up to having Reasonable Suspicion on their own, and they took 250 pounds of fentanyl off the streets. That’s amazing. Also amazing is that this bust comes one week after the biggest seizure of fentanyl pills in history.

This time the DEA busted a Stash House controlled by the Sinaloa cartel in Los Angeles. A million pills are enough to kill a lot of people. This year’s already seized about 1,400 pounds of just fentanyl in the year.

Just last year, It was only about 1,100 pounds and that’s when they have fewer agents out on patrol because it is a massive amount of illegal immigration coming across, and with the immigration crisis also getting worse.

The drug cartels are taking advantage of us as a majority of the agents are now occupied by things. It’s getting worse on a daily basis. So without some significant policy changes at the national level, it’s looking a little looking pretty scary.

All right, some pretty tough words. There it’s a pretty frightening words, and they’re basically saying that Washington. D.c. needs to come up with new policies regarding Mexico and regarding cracking down on these folks.

But obviously, the border is exploding with immigration.

On the other hand, the government of Mexico isn’t doing a whole lot to help us. The Mexican president actually has openly said, you know, we’re not going to go after the cartels unless we have incentive from the United States.

And right now, there’s not much incentive, I guess. So. It’s a very, very tough. Raishin at the border for the border patrol, but the fact that they’ve actually made these major bust and they’re getting so much fentanyl off the streets shows that even when they’re diverted to the immigration crisis, thankfully, they’re getting the job done and getting some of this poison off the streets.