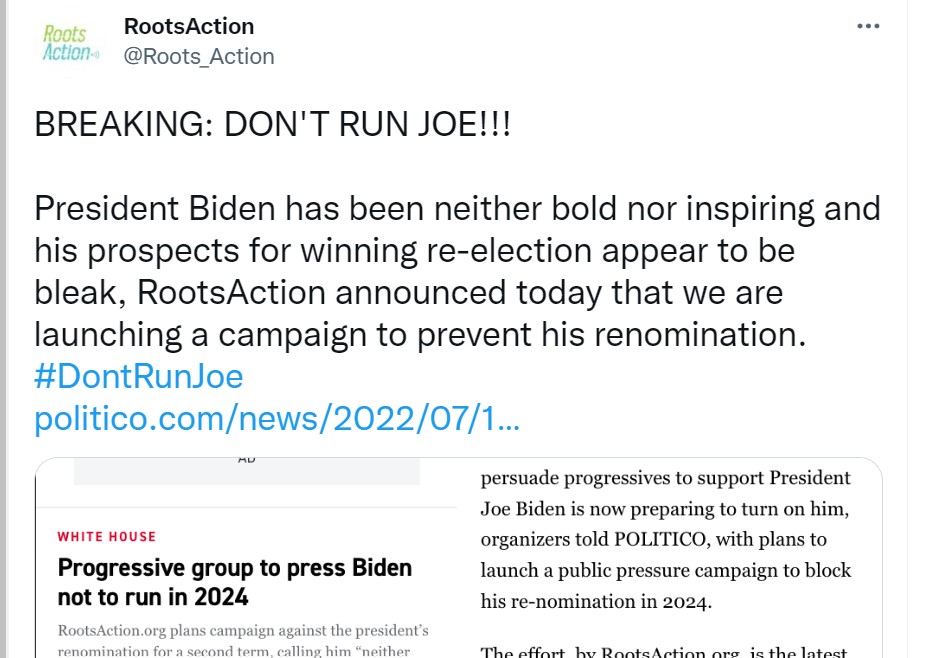 Progressive groups are not happy about the state of politics, and they are planning to press Democrat Joe Biden not to run in 2024, according to recent media reports.

“I wanted real change. I knew Biden wasn’t up to the job. He somehow has been worse than expected,” Beaux James wrote in response to a Youtube video from a Democrat commentator.

“If Joe runs in 2024. It is an automatic loss. Joe could lose to a toaster oven,” Ivan Placido wrote in response.

“Even if there is a Primary it won’t matter. Super Delegates & the Party chose who the candidate is not, the people,” another viewer wrote.

Many Democrats are simply not happy.

“Rootsaction.org plans campaign against the president’s renomination for a second term. Calling him. Neither bold nor inspiring here,” Kyle from Breaking Points said, reading from a recent Politico article on Biden.

Roots Action describes itself as a “Progressive group that helped defeat Trump. Now we’re pushing Dems to deliver for the multiracial working class & people of color, youths that elected them.”

And their recent posts show that they are earnest about ditching Joe Biden.

The commentary in a recent left-leaning video is pretty interesting about the divide in the Democrat Party.

“Kyle talks about the progressive groups pressing Biden not to run in 2024 because of his cratering approval ratings and Democratic voters who want another candidate,” the video description read.

“That’s exactly correct. All right, let’s see what they say. A left-wing group that worked in 2020 to persuade progressives to support President. Joe Biden is now preparing to turn on him. Organizers told Politico with plans to launch a public pressure campaign to block his renomination in 2024,” he said.

Of interest to Breaking Points commentators was the fact that numerous new polls have come out in mid-July, which is devastating for Biden.

“If you’re a Democrat and you are getting clobbered. And it is the latest sign of unrest among Democrats about how Biden who’s job approval rating has cratered during a punishing midterm,” he said.

And now, according to the POLITICO article, the Progressives are so mad they are going to turn on the Democrats and use the public pressure tactics on their side.

“Roots Action has an email list of about 1.2 million people in the United States. Their plan is to spend six figures on a don’t run Joe campaign,  with a digital ad starting in early nominating States on November 9th,” Breaking points commentator told his audience.

However, prominent Democrats have said they will support Biden. And if he seeks re-election, then he plans to appeal to rank-and-file Democrats that will be the civil war in the Democrat party we will all see.

According to a New York Times Siena College poll released July 11, nearly two-thirds of Democratic voters said they want someone else to be the party’s nominee.

Roots action said in a prepared statement that Biden’s prospects for winning re-election appear to be bleak, and with so much at stake, making him the Democratic party standard Bearer in 2024 -would be a tragic mistake.

“It’s possible that Biden if he runs in, 2024 would quickly coalesce support from throughout the party. He accomplished that in 2020, largely winning over progressives after defeating Bernie Sanders among other liberals in the primary Sanders the. Progressive icon, Roots action initially supported,” Kyle said in the video.

His response was interesting,

“Apocalyptic disasters unfolding around us. It’s just it is it flies in the face of all the left-wing supporters that we would support Biden; look, we’re at a Crossroads, this is a really important moment, we got climate change, we got to do something with corruption, we got to do with income and wealth inequality, and then it’s like-  Yeah, but this guy who’s a zombie, who’s half dead? Who sucks as president? Whose governing like like Bill Clinton 2.0? Yeah, this guy, this guy will do it for us. Come on, man, I am not buying it.

Following his defeat of Donald Trump, Biden’s job approval rating has fallen below thirty-nine percent, that’s the average, according to the polling average, worse than Trump’s at this point in his presidency, and that is amazing worst on average worse than Trump.

Not one poll shows him better than Trump on average.

They say confidence in Biden has been waning among young voters and people of color, critical Democratic constituencies in Democratic and Republican circles. Moreover, there is widespread uncertainty about the state of each party’s likely standard Bearer in 2024, and they go on to talk about Trump here anyway.

This group supported Bernie in the primary, and they made the case to support Biden, and now they are saying they need to get Biden out, and the commentator was not at all happy. He accused them of becoming like the Swamp.

“Progressive groups and institutions that are in the vicinity of Washington. D.C. is that ultimately they all seem to get won over. So I’m to become more team players; I don’t know of any natural Outsider groups that end up in Washington DC and then maintain their Outsider status-  they end up being a lot more toothless than they should be.

So ultimately, I don’t know if this is going to matter, but the fact of the matter is, we are at a point where at least for a primary, the party is fighting at a million miles an hour, and they are correct to do.

So cable news is ripping us apart, dividing the country, making it impossible to function as a society, and making it possible to know what is true and what is false.