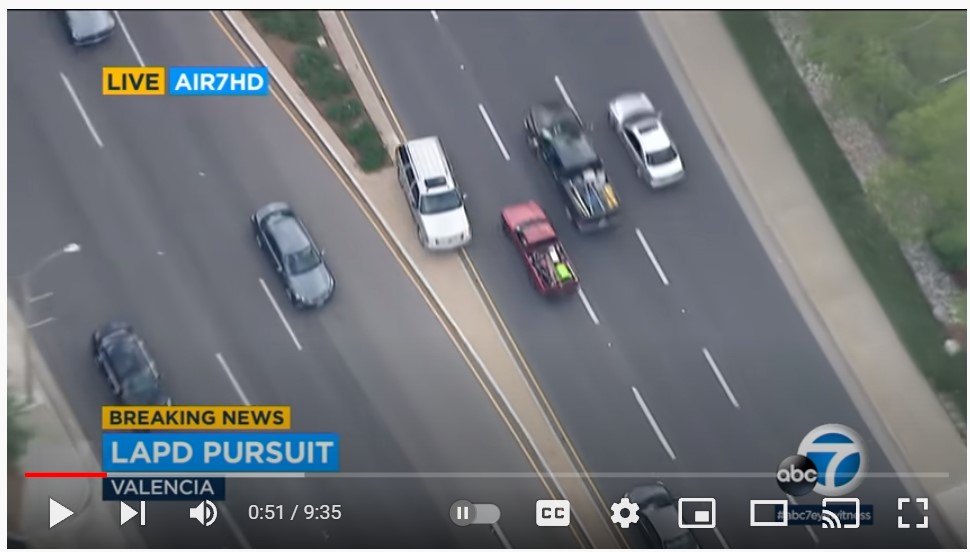 After a summer of riots to bring to completion the left’s utopian dreams of defunding and transforming law enforcement in the United States, by defunding local police departments- crime and disrespect for police is on the rise.  So is illegal immigration, drug deaths, crimes, homelessness, poverty, and substance abuse.

The transformation, into a lawless world, appears to have been a plan- as found in this manual, written by Kamala Harris’ sister- Mya Harris West- on how to defund the local police departments:  ORGANIZEDFORCHANGE_FINAL (5)

And in a lawless world, we get occurrences of crimes like this high-speed chase, which endangered the lives of many people.

California Highway Patrol Newhall officers had three suspects in custody as of Wednesday afternoon after the Los Angeles Police Department’s pursuit of a stolen vehicle led to the Santa Clarita Valley, according to law enforcement.

Deputy Natalie Arriaga, the spokeswoman for the SCV Sheriff’s Station, said they set up containment on the intersection of Valencia Boulevard and McBean Parkway at approximately 5:10 p.m. as the pursuit continued into the Santa Clarita Valley and one suspect fled on foot into a Valencia condominium complex.

Two suspects were seen in televised helicopter footage attempting to flee the vehicle on foot. One of them returned to the vehicle.

The pursuit reportedly headed toward the SCV via Interstate 210 in the San Fernando Valley, passed the site of a plane that had crashed alongside the freeway, and proceeded onto Interstate 5, where the suspects exited in Valencia.

After two of them apparently jumped out of the moving vehicle, one suspect headed into the Facey Medical Center parking lot and then into the nearby Siena Villas condos, located on the 24000 block of Del Monte Drive, where he was ultimately detained at gunpoint. Another suspect hopped back into the vehicle, which then sped off on a wild pursuit through the streets of Valencia.

“I was on my patio talking on the phone when the helicopters were going around and around,” said Debi Frishman, a resident of the Siena Villas. “And I thought, ‘You know, I think I’m going to go inside and lock all my doors,’ and I did.”

Frishman said that when she came back outside, she saw multiple deputies looking underneath her orange Audi and that it was not immediately clear if the suspect had been found hiding underneath the vehicle or if the deputies believed some evidence was stashed under the vehicle.

At the parking lot of the Facey Medical Center, deputies were also seen looking underneath vehicles, opening up dumpsters and checking underneath shipping containers just outside the medical building, presumably searching for stashed evidence themselves.

The vehicle pursuit ultimately ended near the Santa Clarita Metrolink station on Soledad Canyon Road. Aerial footage of the incident showed the two remaining suspects running into the Villa Metro gated community, where they were arrested at gunpoint near the complex’s pool.

The area has seen an increase in high speed chases.

California in general is seeing an uptick in these kids of crimes.

News reports from Thursday morning, the day after- that a high speed chase on the 5 Freeway in Santa Clarita, prompted the California Highway Patrol to shut down all lanes in both directions during morning rush hour.

Shortly before 9 a.m., the suspect behind the wheel of an SUV pulled over onto the left shoulder on the southbound side of the interstate but did not immediately exit the vehicle, resulting in a barricade situation as CHP officers positioned themselves behind the SUV with their guns drawn.

After a 20-minute stalemate, five officers — one of them holding a riot shield — approached the SUV in formation and pulled the driver out. He was then taken to the ground and handcuffed.

The scene was later cleared and all lanes were reopened on the 5 Freeway.

The driver was initially wanted for speed violations and failure to yield, authorities said.