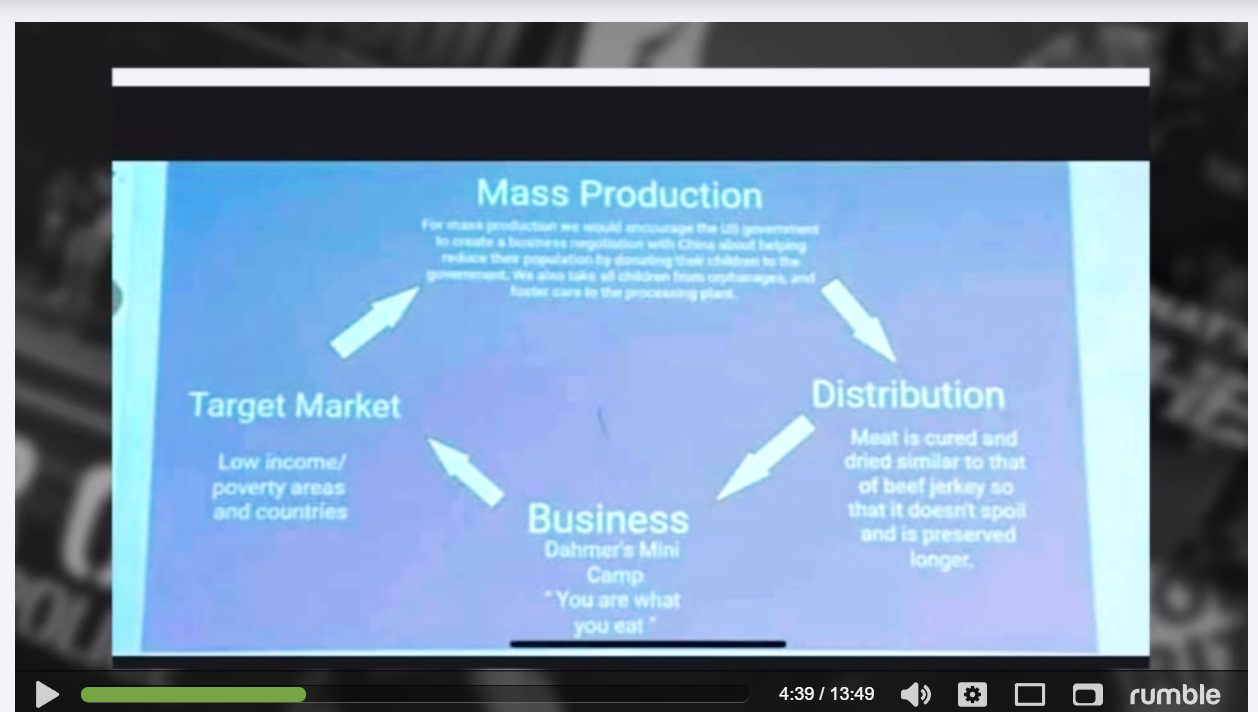 A school teacher in Georgia appears to have developed their teaching materials to teach students about raising and eating human babies.  It was presented as ‘satire,’ but rational people understand that this shocking display of stupidity was meant to normalize a foreign practice, cannibalism, which is not legal in the United States.

“In the lesson the author pushed a Dahmers camp to teach that you are what you eat. And they are pushing for this lesson in low-income areas.  It is based on a graphic novel called My Friend Dahmer, an award-winning book that is found in school libraries,” Rhonda Thomas told her audience.

Key Note:  What many parents don’t understand, as I uncovered from watching a teacher’s training on the topic, is that teachers are being trained by an outside group on how to design their own lessons and operate as social justice advocates under something called Culturally Responsive Training.  School staff has been taught how to push norms in their classroom.

New American presented Truth in Education and their research,  the information:

My Friend Dahmer is a book that glorifies Jeffrey Dahmer, an American serial killer.

“A parent contacted us because the students were very upset. She told us about a lesson that was given that pushed cannibalism.  It was presented as satire but pushed the children to explore the idea of growing, raising and selling babies as food. It was not part of the regular curriculum, it seems like it was something that the teacher developed on their own,” said Rhonda Thomas is the Founder and President of Atlanta-based Truth in Education.

Thomas read an alarming lesson plan and offered slides, with screenshots and photos of a dreadful and bone-chilling lesson on how the teacher would take and kill babies and prepare them for consumption. Watch below.

“A government school in Georgia has been exposed forcing high-school students to develop a business plan for a company that would tackle world hunger by making babies into food, sparking outrage across the state and beyond. In this interview on Conversations That Matter with Alex Newman, Truth in Education leader Rhonda Thomas breaks down the sick “exercise” and even shows some of the graphics and photos. Spread the word!”

HOW IS THIS HAPPENING?

A non-government third party is influencing teachers to exploit their classrooms and act as social justice warriors, while at the same time, graphic novels are showing up in school resources centers for them to add to recommended reading lists for students, bypassing the normal curriculum.

As I uncovered in a three-part series about teacher pieces of training, teachers are being taught to develop their materials under a concept called “Culturally Responisve Training” (CRT).

The pieces of training that I wrote about caused such a stir in the spring of 2021 that the State Department of Instruction took them down and hid them away.  But they didn’t stop the practice of some teachers manipulating the trust parents put in them not to exploit children.