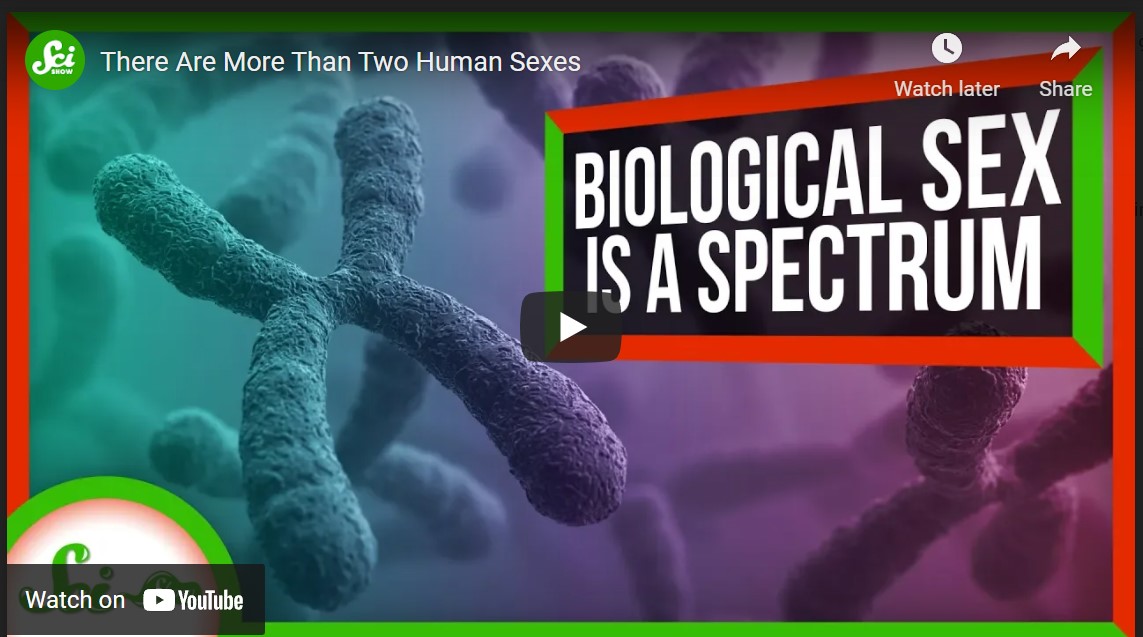 A foreign fantasy about human sexuality has invaded schools, introducing odd ideas to school-age children- such as the concepts of humans having the choice of being binary or nonbinary; teachers are telling students that people can choose their gender, or change their gender as they see fit. Shame on them!

As nonsensical, illogical, and irrational as this seems, these teachings appear to be the entire focus of public education in the state of North Carolina. Students in at least one high school are being fed confusing information about sexual fetishes- dressed up as science. And parents are not alone in being sick of it.

Remember- This lesson is required in that school system, and in physics. FACT CHECK: The video slides into something they have created called “Gender Dysphoria”, and the host introduces the topic of mental health issues in people with gender dysphoria.

The video talks about surgies needed to “unlock” the uthrea, and the need for afirming parents.

The video talks about the changes in medicide to address these issues, for the very small of amount of people that it happens for. Gender identity is something that needs to be “inclusive” for a complicated world.

The video is paid for by outside sources.

According to the video links, the lesson is largely based on the following book, Sex is a Spectrum, lets check out the book:

“This transformative guide completely breaks down our current understanding of biological sex and gender diversity.

Introducing readers to seven variations of human sex, commonly considered intersex, the book challenges the myth that sex and gender are exclusively binary and explores the inherent diversity of biological sex and its relationship to gender identity and expression and the impact this has on society. Examining historical, linguistic, and socio-cultural understandings of sex and gender, as well as genetic and scientific definitions, the book is an important resource for dismantling gender and sexuality-based discrimination and promoting understanding and inclusivity.

Co-written by one of the world’s leading intersex activists and a highly respected scholar in biological sciences, and accompanied with detailed anatomical illustrations throughout, this pioneering text is the essential introduction to gender and sex diversity for gender studies, women’s studies, biology and genetics courses, as well as professionals working with intersex and trans communities.”

Key Point: Social Justice Activists, like Hida, are using human sexuality to confuse and exploit minor children and they are funded by taxpayers. At the same time most systems for parents to petition the schools to stop this malpractice appear to be broken down.

WHY IS THIS HAPPENING?

Because third parties with money and clout are allowed to access school children and influence ciriculum, based on the presence of Common Core and the nationalization of public education. In other words, because your children’s minds are for sale- and the LGBTQ plus social justice movement is well funded and well organized.

Key point: Part of Common Core was ability of nonprofits to design special ciriculums for schools, and influence them with “free materials” like this video, which is not grounded in science at all.

But the schools will love them, because they are “free”.

According to the author of the lesson, based on information from Austrailia, “A lot of people” are represented by his research: (NOTE-that is world population)

“For the estimated 1.7% of the population that are born with genetic, hormonal or physical sex characteristics that don’t fit neatly into medical or social norms, intersex is the umbrella category they reside under.“We’re still born male and female, but we’re born with non-typical characteristics,” explains Smith. “We’re part of the natural diversity of [bodies] in the same way that redheads represent a natural hair colour diversity.”

So social justice activists are pushing a narrative and dominating the entire fields of science and medicine on an estimated 1.7% of the people, and Holly Springs North Carolina is pushing this stuff on High School students.

WHY THE LESSON NOW?

Perhaps to help Hida and his allies celebrate October as “national coming out day“? Perhaps, that is their excuse to normalize the group’s sexual fetishes, because that is what they are really doing:

No matter how much parents plead with school officials to return to the instruction about reading, writing, and arithmetic- a mysterious and powerful social justice movement has control of the education system and is not relenting on forcing this bizarre worldview onto innocent children. Parents are pushing back.

This is the author of the book, lets consider his medical credibility:

Consider how and why the source of this material is important to the people who choose text for lessons. According to Amazon:

Hida Viloria is a human rights activist and writer whose work has appeared in The Advocate, CNN.com, Ms., The Global Herald, The New York Times, The Narrative Inquiry in Bioethics, The American Journal of Bioethics, The Hastings Report Bioethics Forum, in her blog Intersex and Out, and in the college textbook, Queer: A Reader for Writers (Oxford University Press). Hida’s first book, Born Both: An Intersex Life, is scheduled for publication on March 14, 2017, by Hatchette Books.

Born in New York City to recently immigrated Colombian and Venezuelan parents, Viloria, who uses s/he and he/r pronouns, has been in the vanguard of intersex, non-binary, and gender-fluid education and advocacy since 1996 as a frequent lecturer, consultant (UN, Human Rights Watch, IOC) and television and radio guest (Oprah, HuffpostLive, Aljazeera, 20/20, BBC, Inside Edition…). In 2013, he/r pioneering human rights work was recognized when s/he became the first openly intersex person to speak at the United Nations, by invitation, for Human Rights Day.

Viloria is Chairperson of the Organization Intersex International (OII), the world’s first and largest international intersex advocacy organization, and founding director of its American affiliate OII-USA, aka The Intersex Campaign for Equality. S/he currently resides in Santa Fe, New Mexico.

IT IS GREAT TO UNDERSTAND OTHER PEOPLE, BUT WHY IS THIS REQUIRED READING FOR SCHOOL CHILDREN?

According to the author, “A lot of people” are born the same way. And with that mindset, school officials like Viloria claim they are just helping the poor children whose parents want children focused on learning skills over sexuality.

It is fine for people to choose to learn about Hida’s point of view, but when did schools reject teaching children skills that would help them get jobs? When did schools decide to teach students to obsess about human sexuality and other grown-up people’s sexual fetishes?

And how do parents regain the control they lost over their local schools when No Child Left Behind, Common Core and Race to the Top, pushed them out of the arena and replaced them with the agenda of social justice nonprofits?

Education reforms, such as transgender education, worth tens of billions of dollars have been given out as federal grant programs to states that encouraged such education reform. Former President Obama implemented Race to the Top which is over, but the initiative is still driving teacher-evaluation policies and priorities, according to education experts.

But what about the parent’s priorities? When do parents get to have some say over what kids learn?

If parents want to close the doors of opportunity to third party social justice groups, who design such lessons as “Gender Is A Specturm”, they need to end Common Core and change the power of federal funding and return schools back to the parents.

GOING DOWN A RABBITHOLE:

If you want more to consider, check out the notes from the video. Pick out how many social justice non profits are cited. Consider the authority of the sources, WIKIPEDIA, an opensource site where contributions can be made by any social justice warriors. These are the sources from which lessons like, Biological Sex Is A Spectrum, has come and transformed education – as well as all of science and all of medicine.

In high school biology, we learn that humans are born with either XX or XY chromosomes, and that a person’s internal and external sex organs match those chromosomes. It turns out, however, that sex isn’t that straightforward.