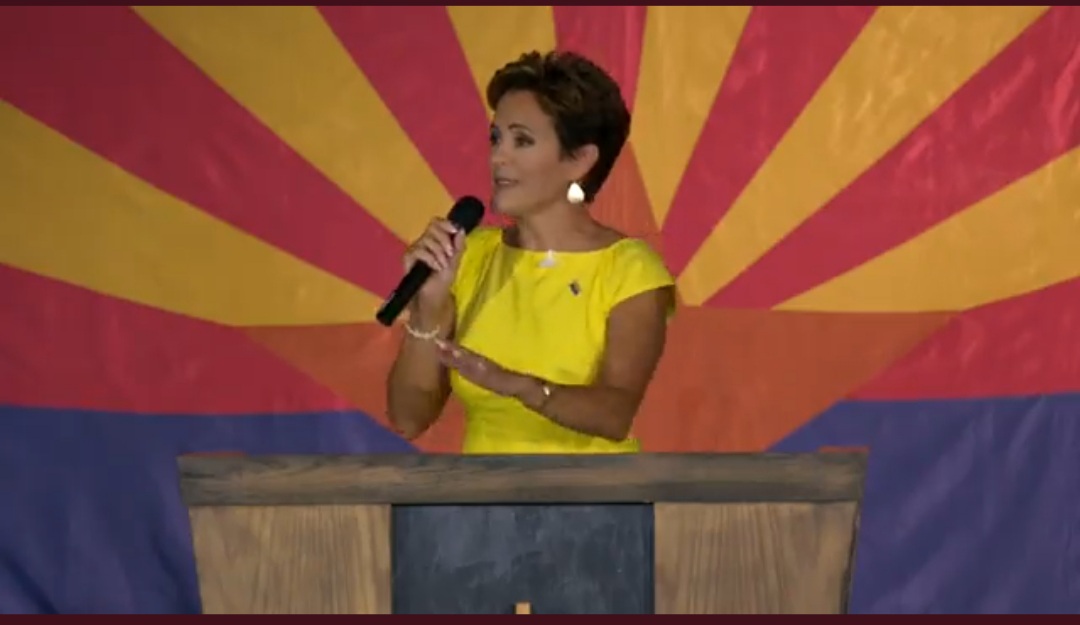 Kari Lake’s attorney, Kurt Olsen, spoke with a small gathering of independent press on Friday night, including Ben Bergquam of Real America’s Voice and founder of Frontline America, for a sneak peek ahead of what to expect from the historic election fraud lawsuit which the Lake legal team had just filed- suing Katie Hobbs and other elected officials over the botched AZ election in November.

Olsen opened up his remarks with a smackdown over the massive election tampering and fraud that happened over the November 2022 elections, which shows a well-coordinated usurpation of the US Constitution.

Olsen reminded reporters that Americans are supposed to expect civil servants, like Hobbs and others, will protect citizens’ rights to free speech- not try to squash citizens’ free speech and prevent people from seeing information about their opponents.

Olsen said that state and national election officials acted worse than people who snuck out in the middle of the night and took down their opponent’s election signs with their shocking and anti-American actions against US citizens’ right to speak and right to know.

Freedom of Speech will be a major focus for the Plaintiff’s legal counsel, which is what he talked about before he even talked about the actual startling fraud that happened on election day in the state- and it should be shocking to all Americans, even outside of the state of Arizona because election officials have been caught reporting American citizens for censorship about election issues.

Even Bergquam, a professional reporter, was a victim of censorship for reporting on the election in his capacity as a correspondent on the scene for Real America’s Voice new network.

Truthfully Olsen’s description of what happened sounds a lot like voters and journalists were being spied upon.

“Katie Hobbs and Richard Richer participated in a broad-based censorship program with the DHS in coordination with CISA and the center for internet security, created- basically- a helpline for state and local officials to censor anybody, Arizonians or US citizens who were posting information on Twitter, Facebook and other platforms that they did not like, and that is a per se violation of the First Amendment, as well as the Arizona constitution,” Olsen told reporters.

According to Cornell University, Per Se is defined in legal matters as: “Latin for “by itself,” in other words, inherently. For example, in tort law, a statutory violation is negligence per se. One of the elements a person has to prove in a negligence claim is that the defendant breached their duty owed.”

Hobbs acted as the Secretary of State and the Democrat candidate for Governor, and Richer is the Maricopa County Recorder. Richer is also a Defendant in the Lake lawsuit.

Olsen guided reporters to focus on the proof they have presented in the lawsuit, saying their case is different from most other lawsuits that are filed based upon allegations of information and belief, adding that he feels their lawsuit has gone ‘far beyond that and put forward evidence that unquestionable shows that this election was stolen will get illegal votes and likely fraudulent votes.”

The lengthy lawsuit document, indeed, as reported by Frontline America Friday night, is full of references to numerous eyewitness accounts of election trauma, which not only accepted illegal votes, but rejected lawful votes, kept people standing in line for oppressive amounts of times, and also disenfranchised large numbers of voters.

“This censorship regime that will be exposed is every bit as dangerous [as election fraud],” Olsen told reporters, asking, “how is it that election officials can work in secret with the federal government and with companies like Twitter and Facebook to censor Americans’ views and information that they see, simply because it is information that they don’t like and under this election contest statute there are several bases to pull down the election.”

Olsen talked about the top points of interest in their case:

Olsen said he will file an exhibit, likely on Monday, of 5,000 examples of a chain of custody issues, ‘so everyone can see the problems for themselves.’

Follow Ben Bergquam @BenBerquam on social media and here, at Frontline America, for more breaking details as they become available.