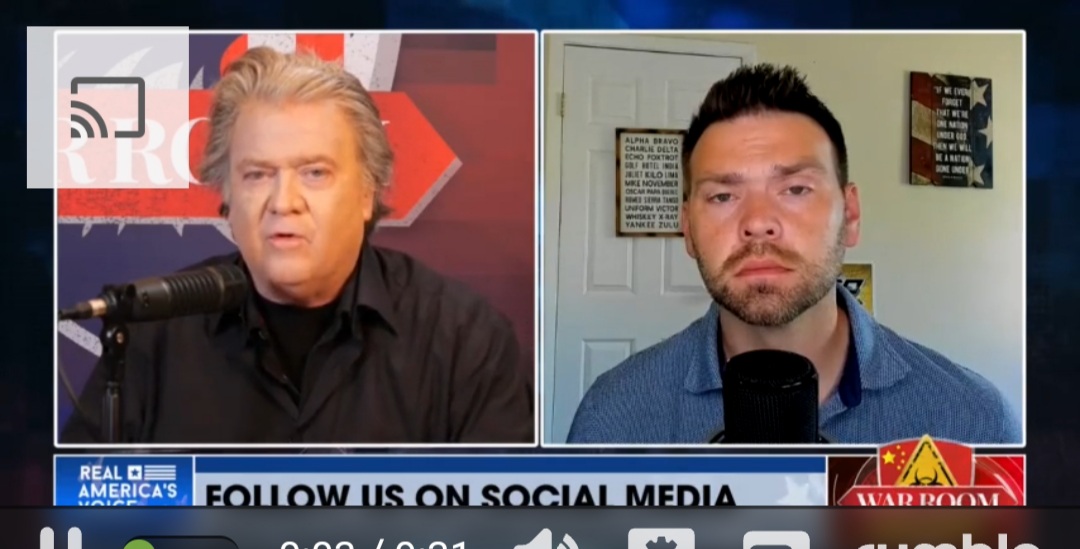 Jack Posobiec from Human Events Daily, appeared on the War Room with Steve Bannon on Saturday to talk about whaot Psobiec has dubbed the “preemptive coup of 2024” also known as the actions of what Bannon has described as the ‘administrative state’; all better known as the people who are invested in keeping Donald J. Trump out of Washington DC and away from upsetting their ‘gravy train’ at the expense of the American people.

The political raid on Trump’s family home in Florida appears to be a set up for a whole lot of drama to keep him from regaining office in 2024.

Posobiec and Bannon talk about what they believe is likely to happen to Trump and his supporters, and the two inspire a unifying of the America First ‘MAGA’ movement, calling for people to stay strong through what they may see happening, to move as a unit on offense so they can complete the play of getting President Donald J. Trump back into the White House in 2024.

KEY CONCEPT: Trump is likley headed for a very unjust trial. Posobiec brings up a point of reference, a book by Frank Kafka titled The Trial, that readers should familiarize themselves with.

Posobiec responded: “You got to understand that Dershowitz is operating off of a framework where he’s saying, what about the Clinton standard, what about these other standards? There was no criminal prosecution of polygamy wouldn’t do. This isn’t the 1990s Anymore. Alan, they’re going to indict Trump, they want to indict him and unless there is massive public pushback. They are going to indict him because they want this to be a pre-emptive coup. That’s what’s under way and we are living through a pre-emptive coup of 2024. They can see President Trump coming. They can see MAGA ascendant.

Notice they didn’t do this. Until you have candidates like Carrie Lake and like, Masters and Joe Kent, all winning in the primaries. And then, boom, they trigger the raid of Mar-A-Lago. This has been going on. We’ve got the, we’ve got the email chain, who got, by the way, and John Solomon had the email chain. Now, we have the affidavit; it’s basically the same thing. You’re going back and forth, back and forth, it doesn’t matter, they will do, whatever they can get any one of these magistrates judges one of these flunkies to put President Trump up there in the well of that easy court system where they know it’s going to be a rigged jury where they know it’s going to be the deck stacked against him.

Look, you want the reality check, I’ll even go straight to the heart of it. They are saying that Trump could have potentially compromised US spies. Here’s the thing. They don’t put the names of a spies in the document. But here is the thing those names are kept on a completely separate system that’s totally separate that’s over at Langley. That’s over at DCS; that’s an NCS the names. And the cover names are kept safe.

Yeah, those not even the cover name of the spies would be in these documents. It’s derived from intelligence. That means something that’s been saturated layer through layer 3 layer, you’ve no idea where it came from. It just going to say something like, you know, Kim Jang Hoon wants to do this, and this with the upcoming nuclear missile test, right?

You have no clue how we got that information, and you’re not going to.

So, this is a joke and it doesn’t matter also because at the same time from a legal standpoint, the present United States has the ability to classify something, the president doesn’t have security clearance, he is security. Learn your theory of the case of the pre-emptive coup, that’s all.

And that’s that- it is all very interesting but it’s irrelevant because these people are Lawless. They don’t believe all day long and they’re just going to play Smash Mouth, Steve.

All they need is one judge who agrees with Andrew Wiseman. And hear Wiseman was the top Bulldog for Mueller during the Mueller investigation- over there at the Department of Justice in that special counsel’s office,and they want to indict.

And we’re hearing this from the White House, by the way. They think, if we’re alleging, that he did all these things, and if we went to the point that we were going to raid Mar-A-Lago- well, now, you have to indict him because otherwise, it looked like this was just politically, motivated.

Steve, it’s not even really my concept because this isn’t some hidden thing. Joe Biden went down there, the high school poorly attended High School in Rockville, Maryland were by the way, one of the guys who was able to get to the front row was screaming, you stole the election, he stole the election. ANd Joe Biden turns around and says that Maga is the enemy class of the regime. He said this publicly, everything that flows downward from there flows down from that statement. That is the sentiment of this regime. Your movement is the enemy movement. You are the enemy, they are treating President Trump like an opposition.

I’ve seen this movie a million times first. They put out, they say, oh, we broke some law. This law that law, that they haul him off and chains, then they have a show trial, then they lock them up, right?

Just been done for 100 years, go reader the trial by Kafka, and you’ll explain the last scene, after processing, by the way the guys let off the execution, he hasn’t even been told what crime he committed.

Whether it be the public statements on Twitter or other social media, the videos, the people standing there waving the Maga Flags peacefully, or Maga drag the interstate events, all the different things you can do to show your support right now. That is the biggest thing, the political, and the social blowback, and also, the international blowback.

That’s what’s so important right now because the lawlessness of this regime has to stop, you want to go back to the ballot box when I have secure fair elections on election day, not election week.

And we want to get back to the point where number one, we don’t throw out the Republic just because they hate this President and they hate this movement so much and Steve that’s exactly what they’re doing. T

hey want to say we are anti-democracy. Look What you guys are doing yourselves sir and by the way, if there’s people right now, they’re saying oh, the inner circle is getting cold feet.

You know what name, every single one of them will be taken the off the list at Mar-A-Lago. You don’t have to worry about it anymore because we are going to be leading this thing. The balls going all the way down the field and there’s no stopping us.

The War Room posse is the 0 line.

And we are going in there. Rain dirt, sleep. It don’t matter because you will not move this posse.

Jack Posobiec: The Biden Regime is ‘Throwing Precedent out the Window’ for President Trump’s Case https://t.co/LPa9VCS4Gd