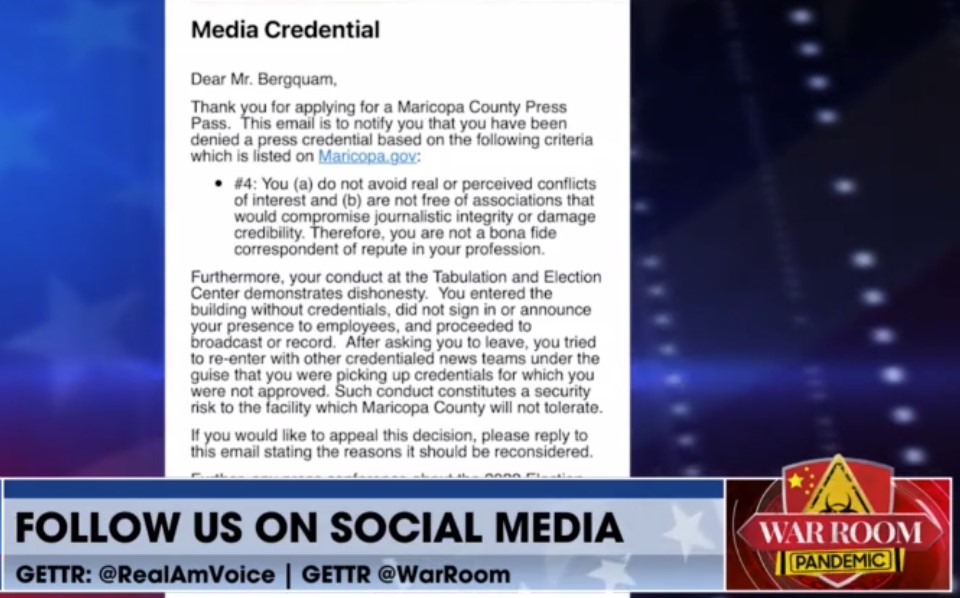 Ben Bergquam is the courageous host of Law and Border on Real America’s Voice. He was forcibly removed from a press conference in Maricopa Co about the bizarre election process there and told to participate in a ‘free speech zone,’ which is behind the fence, and removed from the ballot counting areas, so he could not report on the details there.

BIG POINT: This all happened in Arizona, where the person running for office is in charge of counting ballots.

Bergquam discussed the details of being denied access to the press with Steve Bannon, host of the War Room program [10:00]:

“We were denied for the same reason, they denied Gateway Pundit’s credentials, and I’m going to actually read this small section to you. It’s, it’s almost hysterical,” Bergquam said, adding:

“A- You’re denied because you a do not avoid real or perceived conflicts of interest,” Bergquam said, reading from the email, reacting, and adding- “that’s not vague at all, and B are not free of associations that would compromise journalistic integrity and damaged credibility. Therefore, you are not a bona fide correspondent of repute in your profession. “

Bergquam and Bannon went on to discuss more details.

The results of the midterm elections earlier in the week are still undetermined as the state is slowly counting the ballots that continue to drip in.

In a firestorm is the Republican candidate for Governor, Kari Lake, who was a controversial candidate for her America First agenda and for her determined stand to close the Southern Border -if she should win.

Bergquam has followed her campaign from the beginning.

Bergquam appeared on the War Room program with Steve Bannon to talk about the details of her campaign, the counting process, and him being removed from an area as he was seeing things unfold.

Bergquam offered up an incredibly inspirational point of view.

For more details on Bergquam’s coverage: