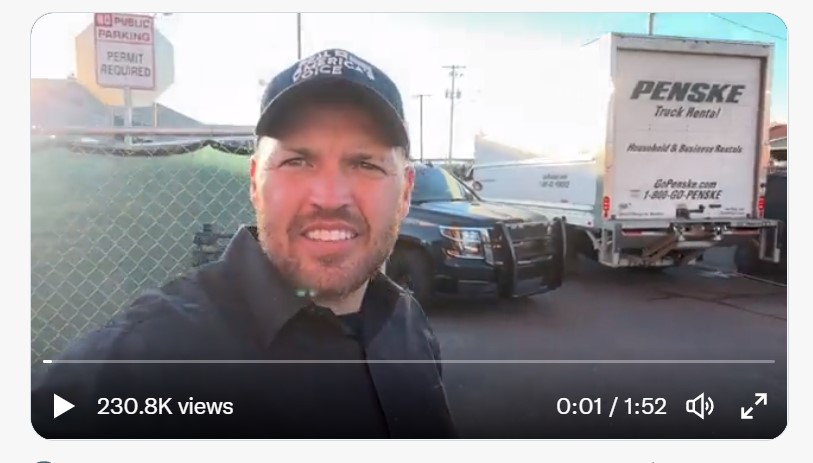 Ben Bergquam is an experienced and professional investigative Journalist with a body of work on important topics that concern Americans, and he is being denied an opportunity to report on a massive national story he has been following in Arizona for over a year.

Bergquam is employed by the news and media network Real America’s Voice and has been on location in Maricopa County, Arizona, where this story unfolds.

There are tremendous concerns about large amounts of ballots being ‘dropped’ into the counting centers, which is reminiscent of the 2020 national election.

Ironically, after covering the scandals of open borders in the state, Bergquam is forcibly being moved past security borders meant to protect election officials from scrutiny.

The Maricopa Co. PIO (Public Information Officer) Ron Coleman, who was coordinating the press conference where Bergquam was filming, told the two Independent journalists, “You can go to the free speech zone and protest if you want to.” When asked if free speech was allowed on the public property that Conradson pays taxes to maintain, Ron said “no.”

“Free-speech zones refer to areas on college campuses and at certain public events, such as political conventions, specifically designated for protesters and demonstrators to exercise their right to freedom of speech,” according to MIT.

So why are two journalists being removed to an area designed for college protests and radical leftists?

Maricopa Co, where there are epic concerns for election integrity, is at the center of controversy over the lingering election count, which has gone on for days, is seeing mysterious late-night batches of ballots being escorted to the area.

The officials do not want to answer any questions about where those ballots are coming from, so removing journalists from the area is highly suspicious.

What has happened to America?

Here are some of the details from the Gateway Pundit:

“As The Gateway Pundit reported earlier today, the County has surrounded the Elections Center with fencing, sidewalk barricades, and armed Sheriff’s deputies. Deputies were even photographed on the roof of the building on election night,” Jordan Conradson reported.

Conradson was being interviewed by Bergquam at the time the two of them were removed and told to stay outside of security barricades, preventing the two journalists from observing the election process.

According to Gateway Pundit, this is an ongoing issue for the outlet.

“In October The Gateway Pundit reported that TGP correspondent Jordan Conradson was blocked from access to Maricopa County’s election-related events in a clear effort to silence this news organization and stop us from reporting on election discrepancies in Maricopa County.

According to the footage from Bergquam, security for the election officials told both Bergquam and Conradson that they did not have the proper credentialing to be present.

Gateway Pundit was not pleased:

“The Maricopa County officials do not want any trusted journalists in the building. They only want leftist and lapdog media in their pressers as they slow-walk the election process in Maricopa County,” GWP reported.

This story is developing…