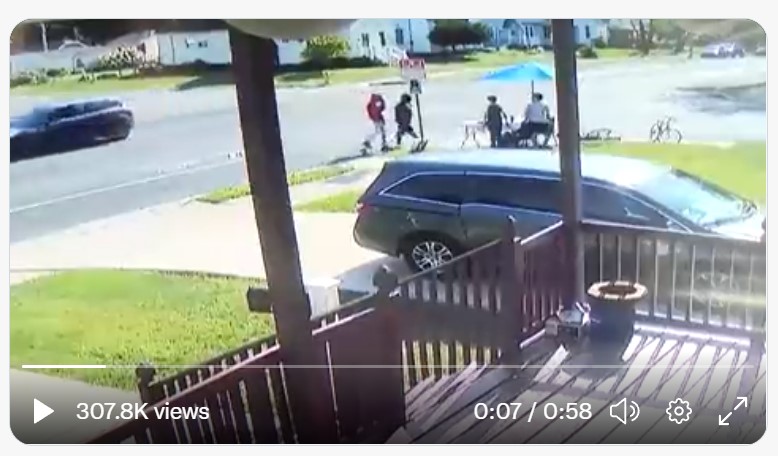 American Populists and Conservatives have been battling with the radical far left for decades as they have flooded our country with people who do not share our values, traditions, ethics, morals or general feelings about ‘brotherhood’- and this story is a painful reminder of what America once represented- that we have lost along the way.

Gone are the days of thinking that ‘we are all in this experiment together- as we are forced to acknowledge an increase in crime and hostility toward one another.

Not even a kid’s lemonade stand is safe anymore- from the changing values by so many,  in the United States of America.

The Lemonade Stand is a quintessentially American activity. Read in a recent report about lemonade stands:

When you’re 11 and you need cash, one way to make money is to become a young entrepreneur.

That’s exactly what Railyn Walters did when she took to the curb in front of her Thunder Bay home with her lemonade stand. Since school let out for the summer, Railyn has been maintaining a steady flow of lemonade for passersby and motorists who stop along the quiet street for a refreshing glass of the citrus drink.

At a buck a glass, Railyn has a long way to go to achieve her dreams of affording cheerleading sessions, and some girl stuff too.

“First of all, to be a cheerleader costs a lot of money,” she said.

“And then there’s all the stuff you have to buy for it, like (gym) shoes for $124, and that’s a lot. Then there are more things like workout stuff and more and more that just adds up to like $800.”

Railyn says she is saving the money “purely just for cheerleading at the moment,” but there are other things that a young girl would also like to purchase for herself.

“I always like to buy myself stuff like makeup and like hair products,” she said. “But I’m trying to stop that and save the money to do cheerleading. I wanted to do cheerleading since I was six. It’s always been one of my dreams to be a cheerleader.”

So how would it feel to be a kid and to have your lemonade stand robbed by two thugs in hoodies?

Watch as JUST that happens to some young kids- and see how people react.

The reporter on the video said:

“In a surveillance video provided by a neighbor, you can see two males approached, you to Peterson and his friends, as they sell lemonade, just before 5:00 Friday evening, the mail on a dark hoodie who has been described as a teenager moves fast displaying what looks to be a firearm and quickly snatching the cash box running off with $30.

One of the boy’s father said it was terrifying at first but what really moved him is how his neighbors responded. People want to help in any way they could some folks bought glass for 20 bucks after they heard what happened run.

One man, in particular, came back like a half hour later and he had all these bags of chips and candy and everything and he’s like, hey you can you can sell this at your stands like you can make some money and you helped him set it up and so many people just stopped and and said things of the boys like hey don’t quit like don’t let this stop. You don’t let this discourage you Hayden says you’re still deciding what to do with the extra money but we’ll make sure it’s invested in something positive.”

Here are other stories of Lemonade stand robberies:

In general- Americans are good and decent people, and they care about each other. But the elements who don’t consider themselves a part of the American experiment of security, safety and rights- are among us- that is impossible to ignore. And dangerous to ignore. We need to get back to the American dream.

Robbing children at lemonade stands is not an isolated thing:

And more from Houston:

Back in 2020 as the police were getting decimated by the left- in one small community they were helping the two young boys above, who had been robbed, getting a different point of view of what had happened to them, but show up and encouraging the boys. Those are the police that Democrats hate and have done so much to destroy:

Democrats ruin our beautiful communities in many ways. We have a chance to vote them out of power- far and wide- and we need to remember what we are trying to protect and make plans to vote in primaries and in November.