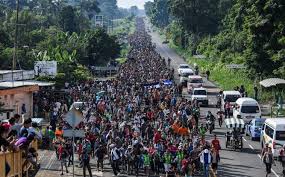 Ben Bergquam, the host of Real America’s Voice show- Law and Border, appeared on the War Room with co-host Peter Navarro on Thursday to talk about the remedies that need to be in place to stop the reckless and lawless policies of Democrat Joe Biden,who has purposefully put America in grave danger.

“We are in Yuma, Arizona. Down here, we’ve been traveling across the border, and basically, the frame is wide open, so we no longer have a border. The cartels are controlling it in places like this. You have a massive group coming across at night just down the road in small towns. And group after the group was coming through and we were actually chasing them trying to help border patrol catch these people because border patrol doesn’t have the resources to deal with it here. That is because they’re dealing with the millions of people that are coming across and place like human Del Rio.

“It is completely out of control, but the worst part talking to ranchers down here in some of the folks down here is they, you know, they’re telling me, they believe this is the plan, and this is what we believe based on the evidence.

This is not failed policy by Joe Biden. This is the policy of Joe Biden and the open borders left,” Bergquam told Navarro.

“What is there that can be done? ” Navarro asked.

“Every governor in the country needs to enact an invasion policy, and they need to use the Constitution; Constitution is very clear in the event of invasion.

The states have – not just the obligation but the duty to secure their own State.

“We’re actually in Arizona were going to the Trump rally tomorrow with Kari Lake, who is running for governor, and she says she will do that on the first day office when she is elected, but we need every governor in America to do the same thing,” Bergquam said.

“Declare The Invasion” was Bergquam’s advice.

And here is more proof that Bergquam is on to something- watch his courageous reporting.

“They had their carpet shoes on, and Border Patrol says they are on the run for an hour or more. This is what Border Patrols does every single day here,” he said.

And Bergquam isn’t alone. He had the opportunity to interview two residents of a border town, who told him what they really think of Joe Biden and his open borders policies- they say it is an Invasion:

“Would you call what you are seeing an invasion?” Bergquam asked two men he saw fishing .

“Yeah, I would,” one man said in response.

“What do you think about Biden’s policies? ” Bergquam asked.

“They suck,” the other man said to Bergquam.

“So, you live here on the border. You guys get to see what’s happening and you know we got the cartel on the other side basically, controlling it all,” Bergquam said.

“Yeah, and you’ve got Biden in Washington, basically making it easier for them. Yeah, under Trump we didn’t see it like this, with a whole bunch of people like jumping the border. Yeah. I don’t know that it has ever been this bad,” was the response Bergquam got.

“How much longer do you think America can take of this?” Bergquam asked.

“Oh, not very long. I mean we have to pay for all those people that come here, you know?” one of the med told Bergquam, who said that the men probably didn’t have a lot of extra money to hand out.

“Definitely not the way everything is right now. It’s hard on us on our own. Just yeah. So look at the inflation. It just seems that Biden doesn’t seem to be trying to make anything better any time soon,” he said to Bergquam.

The men both agreed that the Cartel, who knew the families of people and their connections made everything dangerous for everyone and that they were living in fear.