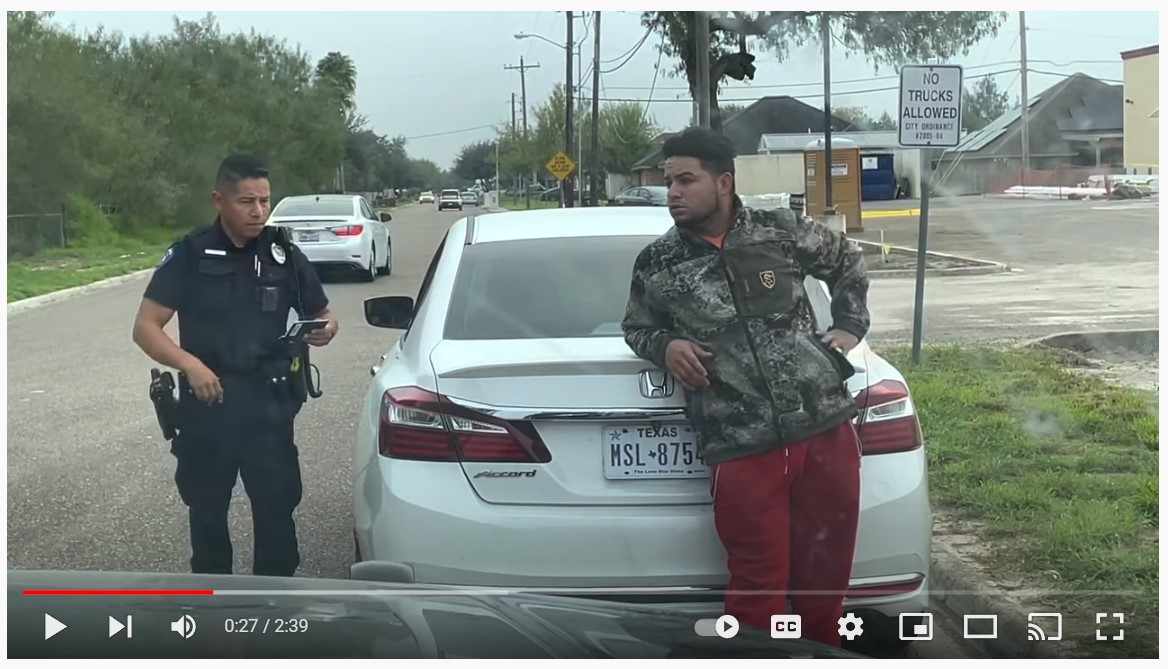 Seen during a recent traffic stop, it appears as if an illegal resident has a total lack of respect for the laws of the United States and an entitled attitude toward law enforcement. It almost seems as if a particular group of illegal residents and border crossers feel untouchable and permitted to behave in ways- in the United States- that Americans are not allowed to behave.

CALL TO ACTION: Watch this video. Send it, people. Tell them to get registered to vote- if they aren’t already. Encourage them to stop voting for Democrats who have forced this insanity on us.

Listen carefully as the guy who gets pulled over and interrogated gets caught lying about his social security number to border police in La Joya, Texas. The suspect’s excuse is alarming. The suspect says, “Everyone does it,” when confronted about his lie.

CALL TO ACTION: Identify the different layers of Government who have given a pass to the illegal invasion we are suffering. 2022 Elections are coming up fast. Do you understand what we are voting for?

“You say you have been here ten years, correct?” the officer says.

The suspect responds and appears flippant and unconcerned.

“I understand that everyone does that, Sir, but that is considered a crime as well. It might be identity fraud that is going to be between you and the prosecution lawyers. I have to remind you that you did just admit that you are using a social security number with a name that is similar to yours, but it is not your social security number,” the officer said, directing focus to the power of a prosecutors office to stop crime, who often let illegal resident offenders off the hook.

FROM HIS RIDE ALONG WITH THE POLICE

Ben Bergquam, a reporter for Real Americas Voice, and the founder of Frontline America explains the scene and said, “We have a smuggler, a foreign national, who was stopped for not wearing a seat belt. The coordination is incredible. The police here have to deal with this and it is supported by the people in the White House,” directing our focus to the Democrat party, the Democrat administration, and the Democrat politician who is responsible for crafting public policy that allows illegals to feel encouraged to break our laws.

None of the people highlighted support an America First agenda. Do you? If yes- please help us spread the message to others. Get registered to vote, join the Republican Party, vote for America First primary candidates, and tell others why you are doing that.

With Democrats in power everywhere-every town is a Bordertown.

Please help support Bergquam’s courageous reporting by following him on GETTR and Twitter @BenBergquam, and on Youtube and Rumble as Frontline America.