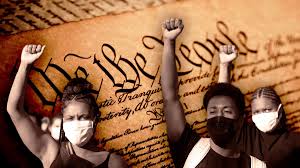 Most Americans have no idea what the final stage is for the combined Democrat-RINO-CCP- Marxist social justice movements that have been slowly destroying the United States of America over the past 50 years, so they may be caught off guard to find out that we are at the end of a Global Communist Revolution.

Consider this a shot across the bow: The Boston Globe is proudly carrying an immigrant’s ideas on the final battle to destroy America as the world has known us, ahead of the 2022 midterms in November.

They are calling their deconstruction of the US Constitution- a “thought experiment”, but if you believe the left is satisfied volleying their ideas around with each other without forcing them on an innocent population, there is something dangerously wrong with your grasp on reality.

Key Point: Democrats and RINOS insist we are a Democracy, so they don’t have to respect or acknowledge the rights we have as Americans- which are laid out in the US Constitution. That is why the document is a target.

“Americans should always view the Constitution as a document that ought to reflect today’s values rather than those of long-ago, slave-owning men.,” a poster on Twitter wrote about the following Boston Globe article.  “Worth reading! Editing the Constitution,” another poster wrote.

WHAT ARE YOU CONSERVING?

It is clear that the final battle for Conservatives, who have wanted to conserve the power of the US Constitution, is upon us. For at least 5 decades, the American left has dismantled many American civil liberties.  The left have invaded our institutions and created a system where American citizens can not defend ourselves from the final assault of the left- they are going to end the US Constitution.

From the historic epicenter of freedom, the Boston Globe brings the world their ideas for Ending the Constitution-the very document that gave us our Republic- and the Boston Globe is going to call it “editing”.

END OF RELIGIOUS RIGHTS BECAUSE EQUITY OR SOMETHING

“Religious freedom and equality rights often come into conflict with one another, but both should get the fullest constitutional protections possible,” The Boston Globe article read.

LIBERATED FROM THE REPUBLIC

And that is what all of the ‘liberation’ movements have been about- creating a big enough conflict between people that social justice warriors can shift public opinion and influence public policy enough to finally remove the rights we have as individuals- and then they rule over us.

Think of all the Marxist Social Justice movements we have seen take hold over the last 20 years. They were all to divide the country and they all worked.

And now the same social justice warriors who brought us Black Lives Matter have a plan that is easy- they will treat the US Constitution like it is an open-source- Blockchain project and their community organizers are going to devise a new strategy for the world to bypass what they feel is outdated.

OLD FASHION LIBERTY WILL BE OVER

They are going to delete and cancel Western Civilization, that is the real goal, and it is clear that a Palestinian who is mad is Israel sees America as nothing more than something to take apart.

From the article, the Palestinian has a better idea about the experiment we call an American Republic”

“These problems are not independent of one another. Rather, they collectively reflect a government that is failing to deliver sufficient political and economic rights to its people. Some of these rights could be shored up through new laws and social programs. But the rot that is spoiling American democracy has spread from blemishes in our Constitution that we have allowed to fester for generations. If the preamble to the Constitution calls on us to “promote the general welfare, and secure the blessings of liberty to ourselves and our posterity,” how is it that the freedom of speech applies to corporations in a way that gives them more influence in elections than an actual voter? How is it that the right to vote is not expressly protected in the Constitution? How is it that slavery is still constitutional today if it comes in the form of punishment for a crime?

The Constitution, in other words, is in need of an update. That’s why Globe Ideas has put together this project, in which we asked legal experts, advocates, journalists, and members of the next generation what changes they’d make to the Constitution if they could. It’s a thought experiment to some extent, but it’s also meant to get conversations started about how the Constitution can be the living document it was intended to be.” Want to be more scared, look at this closer:

GLOBE IDEAS | ABDALLAH FAYYAD
Editing the Constitution
The Constitution is undergoing massive changes in the Supreme Court — it’s time to put the founding document in the hands of the people.

That’s why Globe Ideas asked legal experts, advocates, and journalists what rewrites the Constitution needs now. It’s a thought experiment to some extent, but it’s also meant to get conversations started about how the Constitution can be the living document it was intended to be.

These leaders are all well-known Marxist agitators.

Consider that Fayyad did not grow up in America, but he wants us to feel sorry for him that his homeland wasn’t like America- at the same time he is pushing to end America -as a foreigner at an American publication.

Why do any Americans accept and embrace that everyone in the world has a right to protect and defend their homes, their homeland and their national identity but we don’t?  America First is a real movement at a dangerous time.  A time for all Americans to understand what we are about to lose if we don’t get busy to stop it.