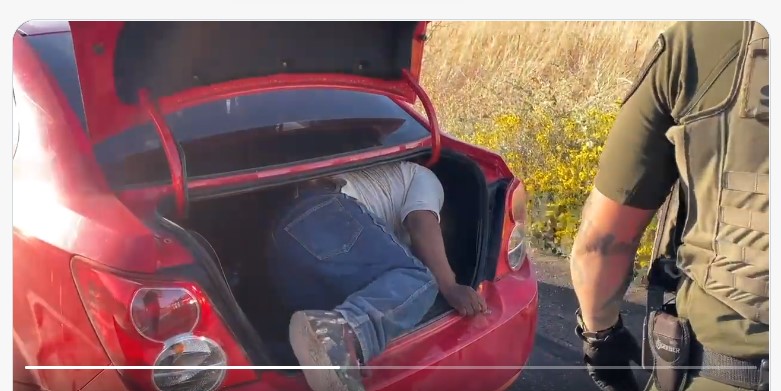 Months ago, when Ben Bergquam was on location in Mexico, he talked about the tactics that people used when they were trying to cross the Southern border of the US and did not want to be detected- and he told his viewers, at that time, that some people wore “Carpet Shoes” in the desert. However, at the time, without a visual- it was somewhat difficult to understand what “carpet shoes” really were.

Ben covers so much of the border crisis and investigates so many details of what is unfolding because of Joe Biden’s disastrous open border policies- that he has now gotten live footage of illegal invaders wearing carpet shoes.

In the following video, Ben is heard talking about a traffic stop he is witnessing. He talked about the people in the car and the dog who was brought over to determine if there were any drugs in the vicinity, affirming that there were narcotics found.

And then! Something very surprising happened as a Pinal County officer opened the truck of the stopped car.

“Not only do the cartel not care about him, but the guys driving the care don’t care about this poor guy who got stuck in the trunk,” Ben said into the camera about the 4 men who were apprehended.

“Carpet Shoes and a Dude in the trunk! New behind the scenes footage from “Law & Border” only on Real America’s Voice News. *Exposing Biden’s Border Invasion in Pinal County AZ,” Bergquam wrote.

Make sure to watch Ben’s new show- Law and Border on Real America’s Voice. Episodes here. And follow him on GETTR and Twitter @BenBergquam and on Youtube at Frontline America.