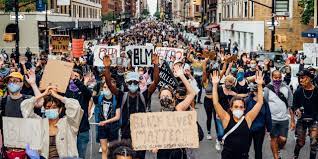 This article is a flashback- to show the connections between all of the Police reform political theater events by the left.  Social media police really do not want you to know the things that I am talking about here. So be careful here.  I am exposing what the left does not want exposed.

All of the social media freaked out about this article that I wrote on September 24,2020.  I was given a time out from Twitter for week, and the article had to be taken off of the platform it was on- after getting about 100,00 views. The public interest was intense at the time, because the riot ativism on the left was forming ahead of the 2020 Presidential election, over the shooting death of Breonna Taylor- as people were whipped into a frenzy over the anti-American propaganda.

See if you can detect WHY- where links have been disabled it is because Twitter removed the post.

The unfortunate truth about Breonna Taylor’s life is starting to leak out through Independent media reports that things were not as the media has presented them to be, in fact, the media is lying to help promote a hoax, and that is exactly a part of the left’s systematic destruction of American and their institutional rage machine called “Cultural Marxism”.

The left knows what they are doing, these are same tactics the Chinese Community Party use to bring about the cultural revolution in China, and that George Soros uses to destroy nations, and the domination and control of the media is one small part.

With all due respect to Breonna Taylor’s mother, family and friends, she was not an angel to the world. That does not mean her death is not tragic, it is, she was human and we wish she had a chance to live a good life, but her choices led to this problem. It is theater that the media is presenting to us about who she is.

The use of Political theater is a very important part of staged police reform, according to the Poly Links, 2004 manual on reforming police Departments, which was written by Maya Harris, Kalama Harris’ sister.

The left has perfected the use of the outrage industry with the use of various other grassroots marketing platforms, with Democrat lawmakers and with the assistance of people like George Soros and his money to reform criminal justice.

According to filmmaker Joel Gilbert, the maker of the Trayvon Martin Hoax, this is another hoax by Lawyer Ben Crump, who was involved with both cases. In the Martin case, Crump uses a fake witness that he knows is fake. Filbert uncovered that the woman who testified as Martin’s girlfriend was not his girlfriend. She lied. So her testimony that Martin was talking to her the night he died was a lie.

The media is not vetting the information they are publishing, they simply carry the message they are told to post.

Understand that even Black Lives Matter admits they were formed as a reaction to the death of Trayvon Martin. The truth is Community Organizers were waiting for something to happen, a police shooting to be exact, to elevate and use for political theather. That is in the Policy Link Manual linked by tweet below.

What are the chances Breonna Taylor's boyfriend (who fired at cops first) used her as a human shield? Could that explain why only Breonna was hit by return fire?https://t.co/8vPJXGW7ua

I wrote about Gilbert’s findings that smash open the Trayvon Martin Case, HERE.

Firstly, the media is lying, they have to have the political theater, the Police were not at the wrong house.

According to Law Enforcement Today, “Leaked documents from the investigation of the Breonna Taylor officer-involved shooting showed the close relationship Taylor and her ex-boyfriend, convicted drug dealer Jamarcus Glover actually had.”

According to reports, 39-pages of documents were leaked just two days before bench warrants were issued for Glover. The documents included transcripts of recorded prison phone conversations between Glover and Taylor.

The transcripts also included recorded conversations between Glover and another woman, whom he told Taylor was hold drug money for him. On August 27th, being a convicted drug trafficker, Glover was arrested on new drug charges.

According to police, Glover was booked into Louisville Metro Corrections after warrants were issued for his arrest the previous month on charges including trafficking a controlled substance and possession of drug paraphernalia.

An excerpt from the leaked documents showed that back on February 14, 2020, Glover’s car was towed for a parking violation. Allegedly, Glover tried to file a complaint against the officer and gave Taylor’s phone number as his own.

Six days later, detectives from the Place Based Investigation (PBI) team verified through a database that Glover was using Taylor’s home address, 3003 Springfield Drive as well.

According to reports, Glover, who, in addition to his 2015 drug trafficking conviction had several other pending drug and weapon cases against him, was named on the March 13th warrant that sent officers to Taylor’s apartment.

A man named Adrian Walker was also named on the warrant.

from Taylor’s apartment following the shooting.

Kentucky Fraternal Order of Police President Ryan Nichols said that summary reports are normally a part of a criminal investigation.”

We have been here before, America. The media is lying to the American people, we most focus on reform of our entire system, starting with battling Cultural Marxism. This fake story is an invention.

If you would like more information on the Policy Link Manual and how the left plans and schemes to exploit events around Police Departments, to force their utopia on America- through the use of Cultural Marxism, please see my pinned tweet:

Watch this movie and see if you see the similarities of for all the political theater over police reform.

AND NOT TO WORRY—- they deleted the tweet- but the manual is still online, and I am still talking about it.