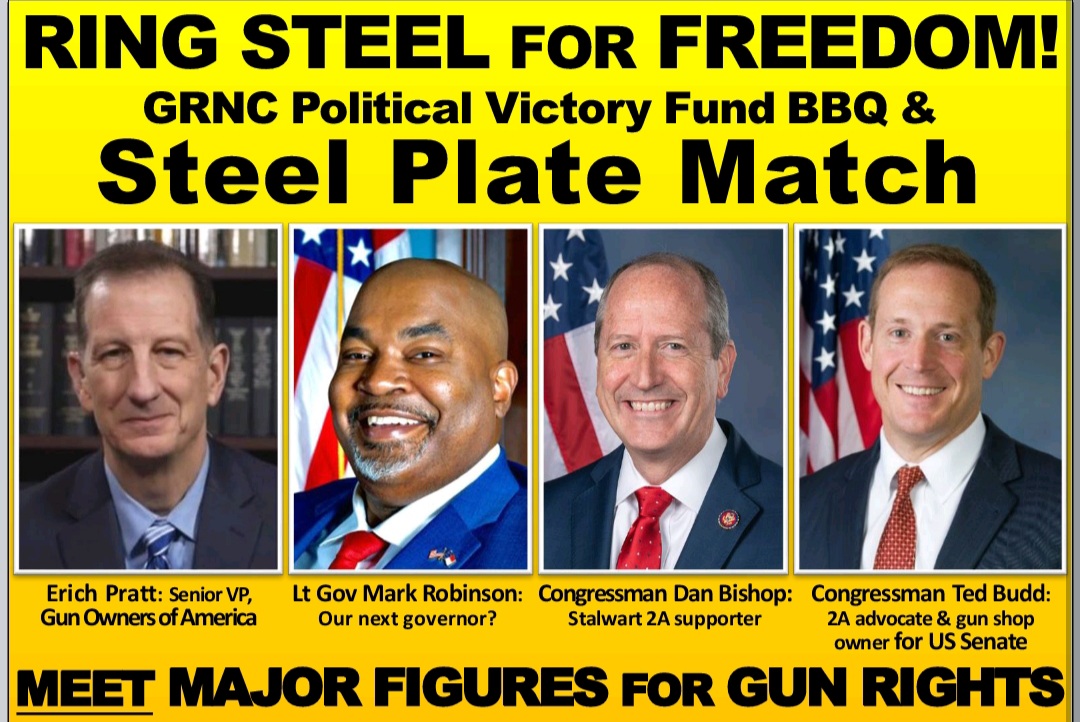 Conservative US Rep. Ted Budd (R-NC), who is endorsed by President Donald J. Trump, is running for US Senate to represent North Carolina, but first, he has to clear a primary on Tuesday, May 17, 2022.  Budd’s supporters know he is facing a tight race against another front-runner, former Governor Pat McCrory- and Budd is closing in on McCrory.

Trump is not the only firebrand to support Budd. NC’s own- Paul Valone is a fiery advocate for firearms in the state and he is not messing around with his support of Budd.  In fact- Valone already called McCrory out in a blistering letter to his membership- over a smear campaign against Budd (allegedly on McCrory’s behalf) from earlier in the Fall, claiming that Budd was tied up somehow with George Soros- and Valone is again raising awareness of Budd at a crucial time.

On April 9th, there is both a fundraiser, by Valone’s group Grassroots North Carolina- GRNC  and a campaign rally hosted by Trump, to help send Budd- a  US Rep since 2017, back to DC- but this time as a Senator to replace retired Richard Burr.

The fundraiser is 10:30-4:30 PM and will include appearances by Lt. Gov. Mark Robinson, US Rep Dan Bishop, and the President of Gun Owners of America.

Information for the fundraiser:

And, of course the exciting news that Trump is returning to North Carolina for a rally in support of  Budd and other candidates he has endorsed in this year’s elections. Trump will speak at The Farm at 95, a wedding and event venue in the town of Selma in Johnston County, at 7 p.m. on Saturday, April 9. The town of approximately 6,300 people is located about 30 miles southeast of Raleigh and has hosted Trump before.

HOW TO GET TICKETS FOR TRUMP RALLY General admission tickets for the rally can be requested by filling out an online form located at donaldjtrump.com/events.

HOW MANY WOULD BE UNDECIDED AFTER GETTING THIS LETTER?

Valone hammered McCrory in a letter- in October- to his massive group membership (here is that letter in full) :

Many of you may have recently received a mailing purporting to be from the “Carolina Senate Fund” claiming some nebulous George Soros connection to Congressman Ted Budd, who is now running for the open seat being vacated by Senator Richard Burr.
Behind the hit piece is a shadowy super PAC calling itself the “Carolina Senate Fund” (which actually hails from Virginia), actually two rich power brokers: James “Art” Pope of Variety Wholesalers and Doug Lebda, CEO of Lending Tree, each of whom have so far contributed $250,000 to the effort.
The plot thickens when you learn that Art Pope has ties to Pat McCrory, specifically that Pope was a co-chair on North Carolina Governor-Elect Pat McCrory’s transition team and served as the state budget director in the McCrory administration.
So it appears this is an attempt to push Pat McCrory for the open U.S. Senate seat. In fairness, super PACs are (at least in theory) prohibited from coordinating with the candidate, so we can’t quite call it a Pat McCrory hit piece against Ted Budd, but … well … you know…
And since we are talking about Pat McCrory, gun rights supporters should understand that we are still saddled with our Jim Crow-era pistol purchase permit system because of McCrory.
You see, when McCrory was governor, GRNC managed to get an omnibus gun bill through the General Assembly, HB 937, which contained a purchase permit repeal … at least until McCrory threatened to veto the bill if it contained the repeal. After that, then-Speaker Thom Tillis had the purchase permit repeal stripped out in committee and the remainder passed only under considerable pressure from GRNC.
Although GRNC managed to get a bill for repealing the purchase permit system to the governor’s desk again this year, anti-gun Gov. Roy Cooper vetoed it (of course), giving us the difficult task of over-riding his veto in a legislature where Republicans lack the supermajority needed for over-ride.
Translated, you can blame all the delays in purchase permits being suffered by gun owners in Wake, Mecklenburg, Guilford, and Buncombe counties on Pat McCrory.
Meanwhile, to give you the measure of the target of the hit mail, Rep. Ted Budd, understand that Budd is a gun shop owner who stands strong for gun rights.
In fact, Budd was one of only two Republicans to vote against legislation containing a “red flag” gun confiscation provision for military members.
While other NC Republicans stated their reasons for voting for the defense bill which contained the “red flag” provision, only Ted Budd and Dan Bishop had the guts to vote against the red flag gun confiscation altogether.
The GRNC Political Victory Fund has not yet made recommendations for Burr’s open seat. They will be out in January. But I felt compelled to set the record straight on who among the two leading candidates has a history of supporting gun rights, and which one is a “RINO.”
Meanwhile, please give the GRNC Political Victory Fund a hand in electing pro-gun candidates. As you may know, we are restricted by law from using membership money to impact elections, meaning we have to raise money separately for GRNC-PVF. Please help by going to:
www.grnc.org/grnc-pvf/donate-to-grnc-pvf