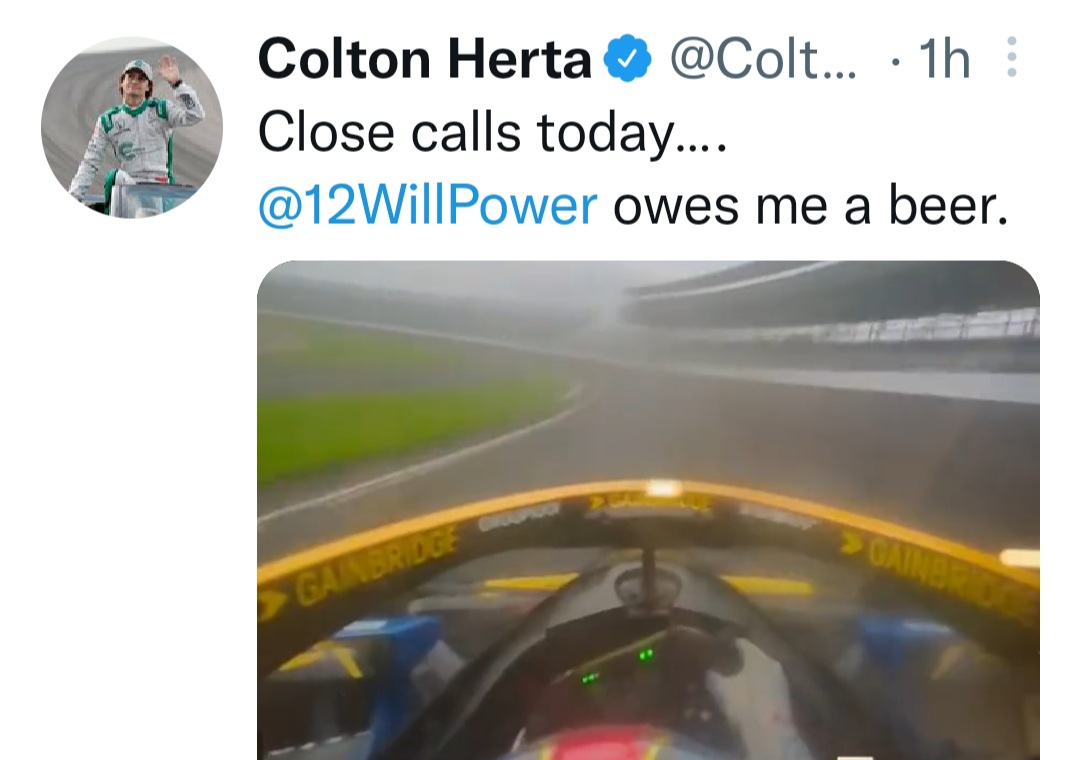 On the road to Indy is a lot of excitement, and today was officially the first day of drivers on the track mixing it up in traffic together; the drivers were having fun, showing a lot of anticipation and excitement to be on the traditional iconic American Oval track.

The first day of a two-day open practice was a bit tense with slippery road conditions, which cut short the practice day-a bit- much to the disappointment of the drivers.

“Us drivers want to get out there and get into traffic quick- we may need to be more responsible when we out there, “Conor Daly told media at a post-practice press conference.

“The track has been sealed up for six months, so maybe it needs to be rubbed up a little bit,” Callum Ilott added.

Colton Herta posted some footage of a close call for Will Power that showed the surprising conditions of the track:

Here’s the perfect beer for @12WillPower to get for you… pic.twitter.com/MOHrHubltk

Even with the soggy conditions, there was a 227 mph lap.

Pacer: Scott Ronald Dixon is a New Zealand racer who competes in the NTT IndyCar Series for Chip Ganassi Racing. Dixon has won the IndyCar championship six times: in 2003, 2008, 2013, 2015, 2018, and 2020. He also won the 92nd Indianapolis 500 in 2008 from pole position and on Wednesday he turned in a very fast lap on the first day of open testing at the Indianapolis Motor Speedway (IMS).

From an NTT IndyCar Press release:

The session started 90 minutes late due to morning rain. Testing ended approximately 30 minutes early as a precaution so INDYCAR and IMS officials could inspect the acceleration lane inside Turns 1 and 2 after three drivers spun while exiting that lane during the day, with two of the incidents happening in the last 20 minutes of running.

Cool air temperatures ranging from the mid-50s to low 60s kept speeds high and drivers on their toes as most ran in aerodynamic packs. There were three sessions, with the opening two hours for veteran drivers, followed by a two-hour session for rookies and veteran refresher tests and then an open track for all competitors.

“I think the conditions are always pretty ideal when you run this time of year,” Dixon said. “The car feels really good. A lot of it depends on track placement and how much confidence you have in the car, how big a tow you can get. I guess we lucked out on that today.

“We still have a bit of a test. We didn’t get through too much of it because the session was kind of fragmented, then obviously finishing early. Still a lot of work to do I think for the tomorrow. Maybe we’ll get a bit of a time extension tomorrow depending on conditions. All in all, I think all the drivers were really confident with how the day went and how the cars felt. But I think that’s maybe across the board because of conditions.”

Santino Ferrucci was fourth at 226.182 in the No. 23 Dreyer & Reinbold Racing Chevrolet, while Marcus Ericsson rounded out the top five at 225.341 in the No. 8 Huski Chocolate Chip Ganassi Racing Honda.

The second day of testing will take place from 10 a.m.-4 p.m. (ET) Thursday for all drivers. Track action can be viewed live in the U.S. on Peacock Premium, NBC’s live streaming service. International fans can view the test on IndyCar Live!.

Three drivers – all Indianapolis 500 winners – spun while either on or exiting the acceleration lane from the pits in Turns 1 and 2.

2016 winner Alexander Rossi was the first to suffer the mishap, avoiding wall contact on a spin in his No. 27 NAPA AUTO PARTS/AutoNation Honda moments after the track opened at 12:30 p.m. (ET).

Four-time and reigning Indy 500 winner Helio Castroneves also spun in the same spot during the open practice, careening across the track and hitting the SAFER Barrier in Turn 2 at 5:11 p.m. (ET). Castroneves was unhurt, but his Indy 500-winning No. 06 AutoNation/Sirius XM Honda suffered significant front, right-side and floor damage.

“I didn’t feel anything strange, anything bottoming, I wasn’t pushing,” Castroneves said. “And the rear just spun out. I was trying to control it, making sure I didn’t crash, and it was a very odd situation. Unfortunately, we couldn’t avoid that. It was very unusual.”

Just 21 minutes later, 2018 “500” winner Will Power spun in his No. 12 Verizon Team Penske Chevrolet in the Turn 1 warmup lane and veered toward on-track traffic. He barely kept his car from entering the oval, and Colton Herta was forced to run above the racing line in Turn 1 to avoid Power, also spinning, nudging the SAFER Barrier in Turn 1 and shearing the attenuator from the rear of his No. 26 Gainbridge Honda. Power and Herta both were unhurt.
Ericsson could have been awarded the unofficial driver of the day award after he deftly darted around the spinning cars of Castroneves and Herta in separate incidents, barely evading a major incident.

“He was going left and right and wasn’t sure, and my brakes weren’t quite locked up yet, so it wasn’t clear which direction I was going,” Herta said Ericsson’s evasion of his spin. “Then I locked them up, and luckily he’s a heads-up driver and got out of the way.”

The INDYCAR Radio Network will provide coverage for the all-cars sessions. The coverage will be on network affiliates, including racecontrol.indycar.com and the INDYCAR App powered by NTT DATA.