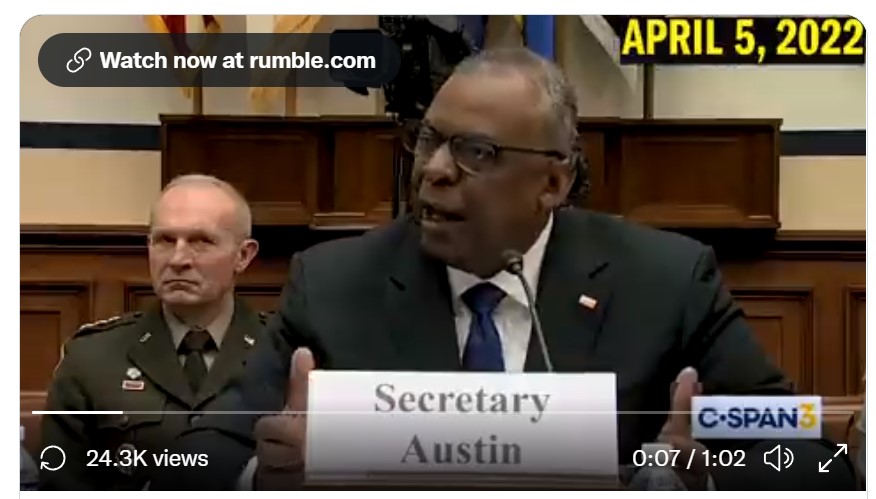 According to Defense Technology Analysis from in early April,  “The US has tested scramjet systems only three times since 2013, with one failure in 2020 and two subsequent successes in 2021 and this year. These systems represent the most advanced hypersonic missile technology in the world.”

Yet- according to the Democrat Chair of the Armed Services Committee- America is behind the Chinese, who have “deployed” hypersonics.  And US Republican Matt Gaetz is calling him out about those comments in a winding and twisting battle between the two US Reps, which includes the National Defense Secretary looking very confused and bewildered- this is not a good place for America to be.

This is where we stand today, in total confusion:

Left-leaning- The Hill tried to paint Gaetz as a conspiracy kook over his line of questioning- so they must not have seen the above reference to WHERE Gaetz got the information about hypersonics race and the US being behind… check out their reporting:

“The Florida Republican responded that the U.S. was behind China and North Korea in hypersonic weapons and other cutting-edge capabilities.

“So, while everyone else is in the world seems to be developing capabilities and being more strategic, we got time to embrace critical race theory at West Point, embrace socialism at the National Defense University, to do mandatory pronoun training,” Gaetz said.

“This is the most critical, the most combat-critical force in the world. So it has been, and it will be so going forward,” Austin replied.

“The fact that you’re embarrassed by your country?” he continued, prompting Gaetz to accuse Austin of conflating his failures with those of service members.

“You guys said that Russia would overrun Ukraine in 36 days. You said that the Taliban would be kept at bay for months. You totally blew those calls,” Gaetz said. “And maybe we would be better at them if the National Defense University worked a little more on strategy and a little less on wokeism.”

How did we get here? Let’s start with funding. Follow the money:

In Sept of 2021, the tension between the players over the Banks NDDAA Amendment rose to national attention.

“The 2022 NDAA funding package was passed by the House of Representatives two days following the inclusion of the SAFE Banking Act. The SAFE Banking Act comes as one of the last amendments to the NDAA, following a number of amendments relating to the U.S. withdrawal from Afghanistan and weapons procurement spending,” Andrew Cooper reported.

“Hearing on the markup of the National Defense Authorization Act for Fiscal Year 2022, Chairman Adam Smith (D-WA) snapped at Rep. Matt Gaetz (R-FL) over statements attacking his apparent support of a contract.”

You can watch the tension rise and the interaction between Smith and Gaetz here:

The Amendment included some discussion of Critical Race Theory (CRT), which Gaetz also brought up to the Committee on that day.

“CRT constrains the mind and makes us think that our grievances matter more than the contribution we can make in our society. Watch Congressman Matt Gaetz give his statement of support for Congressman Jim Banks‘ amendment that would prevent taxpayer funds from being used to teach CRT curriculum in our military academies,”Heritage Action reported about the Sept. 21 hearing.

Gaetz continued to push against the remaking of the US Military, under radical Joe Biden’s administration, into a social justice defense branch of the US Government:

Apr 5, 2022 “Defense Secretary Lloyd Austin and Rep. Matt Gaetz got into a heated argument during Tuesday’s House Armed Services hearing after the Florida Republican accused the Pentagon of being too focused on “wokeism” and defense,” CNN reported.

According to a Press Release from Gaetz’s office that day looking for more information about an earlier meeting that would contradict what Austin testified about, regarding weapons :

Washington, D.C. — U.S. Congressman Matt Gaetz (FL-01) sent a letter to Secretary of Defense Lloyd Austin demanding the declassification of a March 18, 2022 briefing on hypersonics by Defense Department officials to members of Congress. The briefing contradicts the claims made by Austin on hypersonics during his fiery exchange with Rep. Gaetz on April 5, 2022. During a live episode of his podcast Firebrand, Rep. Gaetz announced his letter to Secretary Austin.

The full letter to Secretary Austin can be found HERE and below:

On April 5, 2022, you testified to the House Armed Services Committee that the United States is not behind in the development and fielding of hypersonic weapons in relation to China and Russia. You made this assessment despite admitting earlier in the same hearing that you did not know the inventories of Chinese hypersonic weapons. When I mentioned the United States has indeed fallen behind China and Russia in hypersonic weapon development and fielding, you replied “What do you mean we’re behind in hypersonics? How do you make that assessment?” This question was concerning considering the assessment was based in full on briefs I and other members of Congress have received from your Department’s subject matter experts.

On Friday, March 18, 2022, at 10:00 AM in room 2212 of the Rayburn House Office Building, the Cyber, Innovative Technologies, and Information Systems and Strategic Forces subcommittees received a classified briefing on Department of Defense, Army, Navy, and Air Force/National Air and Space Intel Center (NASIC) hypersonic efforts. The briefers included: Mr. Michael White, Principal Director for Hypersonics, Office of the Under Secretary of Defense for Research and Engineering; Vice Admiral Johnny Wolfe, Director, Strategic Systems Programs, Department of the Navy; LTG L. Neil Thurgood, Director of Hypersonics, Directed Energy, Space, and Rapid Acquisition, Office of the Assistant Secretary of the Army for Acquisition, Logistics, and Technology; Lt Gen Duke Richardson, Military Deputy, Office of the Assistant Secretary of the Air Force for Acquisition, Technology, and Logistics; Mr. Dillon Stenger, NASIC, Department of the Air Force.

Your testimony on April 5, 2022, calls into question the assessments made by the subject matter experts you sent to brief members of Congress on March 18, 2022. Furthermore, your testimony on April 5, 2022, and its conflict with your Department’s subject matter experts, sends a confusing message to the American people who you have vowed to defend and whose tax dollars are used to fund U.S. hypersonic weapons development. We owe it to them to provide the most accurate assessment of how their tax dollars are being spent to further our country’s defense.