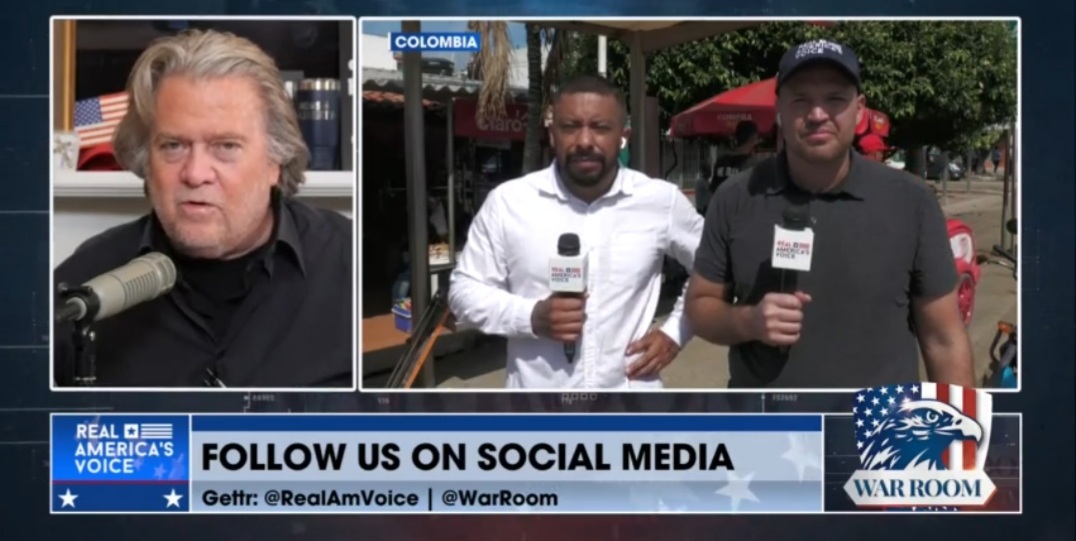 Ben Bergquam and Oscar El Blue, both correspondents for Real America’s Voice, appeared on the War Room with Steve Bannon to update him on their investigations in Central and South America.

Their team reporting shows that people all over the world are in misery over the globalist forced migration of their homelands, were government policies are causing massive numbers of people to flee to different countries because of dangerous and unwanted shifts in their culture, making their homes unrecognizable to them.

Bergquam and El Blue told Bannon’s audience that what they were are discovering is that the world’s governing elite, who benefit off of government systems of control, and who claim to be humanitarians, are destroying civilizations and harming humanity in the United States of America, Central America and South America. All three are connected, the told told Bannon.

According to the two reporters, while the Gloablist-Communist-Socialist left claims they are the great humanitarians of the world- their utopian ideas harm people, especially poor people.

Check out what Bergquam told Bannon:

“It’s the NGOs, the globalist-Communists that are behind the Democrats that are pushing these open border policies that will never allow them to change the parts that make it most dangerous to people. It’s the world view that they all share and have that there are no borders, there are no walls, and ultimately that America is a terrible country and the country needs to be remade in their so Socialist and Communist image. That’s what we’re up against; no matter what they say, no matter what policies they are talking about that is why they are doing things the way they are and fociging people to change- who do not want to change,” Bergquam told Bannon on Friday.

“We are down here in Colombia, and we’re starting the journey across the country to show why we have the Invasion in the US that we have. The invasion that Joe Biden and Kamala Harris don’t want you to see, we are exposing the reality of it. We’re talking to locals who are being impacted, including Colombians who are being impacted by the open borders of the US. Who is saying they’re pissed off at what Joe Biden’s doing to what the Democrats are doing because it’s not just destroying America, it’s destroying Colombia,” Bergquam said.

El Blue chimed in and said:

“It’s the collateral damage that the Bidden administration has created, not only for the United States of America but for Central America and South America; these open border policies are deadly- and the one official who needs to be held directly accountable is Alejandro Mayorkas. He’s the one that has ultimately created chaos in every Central, American South American country. These open border policies are from globalist organizations who infiltrated every country has impacted the country’s economy and security. “

El Blue added his findings about crimes involving even very young people in sex trafficking, saying, “and their push for cultural changes also has increased, sadly minor prostitution and major crimes like murder in cities where border crosses with other countries. It is just horrible as this mass migration is coming to every country. “

What is wrong with the system of government in their own homeland that would cause this massive surge in migrations that we are seeing from economic migrants trying to relocate to the US where Democrat Joe Biden has conveniently left the border open for them- making the problems of the third world- now the problems of the United States of America? The answer to that is- Communism and Socialism.