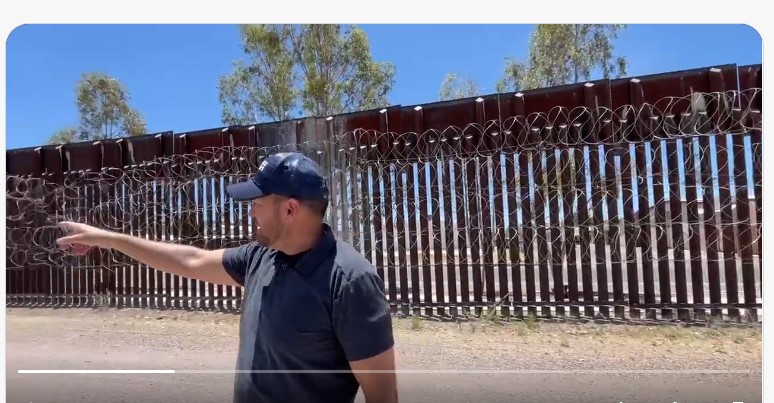 “These areas are getting completely slammed, “Real America’s Voice correspondent Ben Bergquam said as he pointed along a very long fence that went off far into the distance.
“There are two agents for this whole area where 200 people will cross every day,” he reported, pointing to what he called the “old Obama wall”, and highlighting barren spots on the wall where people had cut the wires to shimmy the fence and climb over.

“These are stash houses for safe getaways on both sides, so they are like fish in an ocean, having safety in numbers, and they will come 200 at a time and flood the community,” Bergquam said talking about the disadvantage of the tactic for two patrol officers to deal with.

“Moral is very low here they feel like Joe Bine has abandoned them and that he is incentivizing the Cartels, God bless our border control,” Ben said sympathetically.

Breaking: Tucson Sector BP Chief releases video of flood of illegals into Douglas AZ. They are the ones that don’t want to get caught that use the fake refugees the NGO‘s & Biden are inviting as cover.
With @realAnthonyhttps://t.co/wF5Gf7sa5xhttps://t.co/yoCoQPCRgV@RealAmVoice pic.twitter.com/qJjNYp1z4j