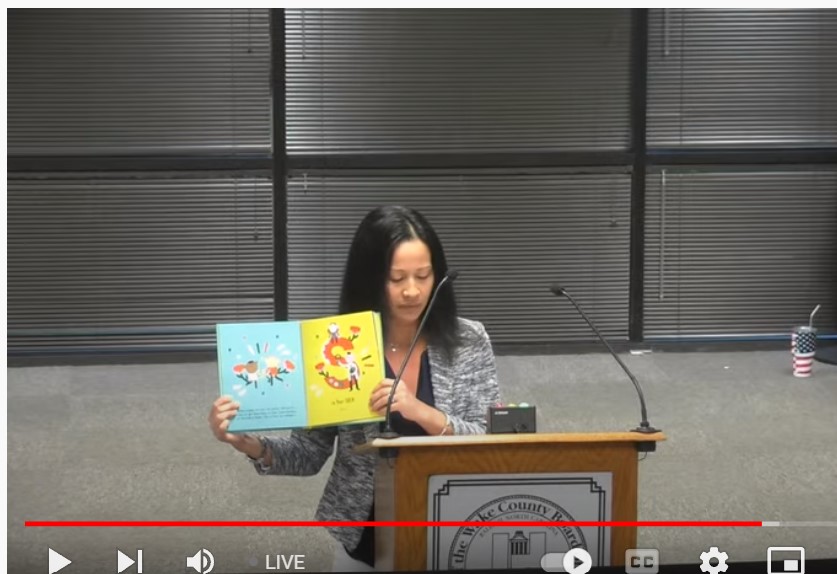 Katie Long is running for school board in Wake Co., North Carolina, in a non-partisan race, but she recently changed her voter registration to independent.  Long said she made the change, as so many others in the area have, out of a distaste for the direction of party politics in public education in North Carolina.

As she sees it, both parties are missing the opportunity to work for the American people.

One of Long’s main concerns for Wake Co schools is the standards of curriculum that children will receive.  She also is focused on the level of communication with the parents about their children’s curriculum, saying she wants to focus on transparency and age-appropriate learning materials.

Recently Long found a conflict that involved Parkside elementary and a third class, in particular, that had met at the school from the previous school year.

Long said she had met a parent from her distinct who was angry, sad and frustrated that her young child had received instruction that she did not approve of- and felt that the lesson was not age appropriate because it contained information about sex. And according to the Mom, she had not yet talked to her son about sex.

The lesson that concerning day came from a book Long addressed in her speech to the school board on Tuesday night,  titled the ABC’s of Equity.

After talking to Long, her attitude is generally that no one is paying attention to the concerns of the parents and kids and that too many people are fighting over political power.

Long has been participating as a concerned parent, herself at Wake Co. School Board for over a year- concerned mostly about the freedoms that are being sidelined at schools.

Long has an extensive history of thinking about the importance of liberty and freedom.

That is why what Long did on Tuesday night, presenting the parent’s concerns at the School Board meeting, was characteristic of a woman whose parents were refugees to the United States from Communist Vietnam and brought their daughter up to cherish American freedom- Katie Long spoke out about the concerns of parents in her district- number 7, in Wake Co.

You can read more of Katie’s story of freedom HERE>

But what about the kids and Parents of Wake Co?  Long said she entered the race determined to stay focused on kids and their parents.  Her campaign site is here.

Long released a statement to me tonight about her speech at the school board:
“Tonight I mentioned a particular book being read to 3rd graders in our schools. Besides being completely age-inappropriate, the point is not the book, the point is the politicization and ideological influences that seem to permeate into everything this school system is doing.

It is a complete distraction from Education! Playing games with teaching an 8-year-old the alphabet is not ideal. Confusing children about difficult things in life is not healthy. No wonder we have so many behavioral health issues in our society. Can we just let kids be kids? Can we just teach them to read and write and cipher numbers?

We keep hearing about situations like this. It just doesn’t seem to be just rogue and rare teachers anymore. All of this happening under the noses of the Principals and Assitant Principals. There are so many great teachers and Administrators, I support them.

But those who are coming with any agenda other than simply educating our children, I stand against. When I am elected in November I will stand strongly for our children, the students, and any and all teachers that are willing to stand with me.

Keep your ideology out of the classrooms! Let kids be kids!
Long4Change”

Here is Long’s speech about the parent’s concerns over age-appropriate curriculum, which she gave on Tuesday at the Wake Co School Board meeting and offered her comments:

Our school system has policies that are failing our children. There’s a learning loss issue which has yet to be addressed. Where is the public discussion about helping the students to get back on track with what really matters—Why isn’t this priority number 1?

A concerned mom in district 7 brought an issue to my attention, and I want to bring it to you.
This mother just now found out what occurred last school year.
She learned what happened when her son and his friend, who were in 3rd grade, were talking about the “S” word.
The concerned mom thought S stood for S-H-I-T, but during discovery it was actually S for Sex.
A 3rd grade teacher at Parkside Elementary School played an audiobook to her students on the alphabet called ABCs of Equality.

I began to question why Sex is being mentioned, as this is not part of the 3rd grade curriculum.
Sex education is not developmentally appropriate for third graders according to the North Carolina Standard Course of Study.

Why weren’t parents informed about this lesson that does not adhere to state guidelines?
Not every parent would want this read to their child in school.
This is not about teaching the alphabet.- Transparency and trust between the school board and parents have been broken.

I don’t have enough time to go over every letter in this book but let me say
S is for Sex. When a baby arrives, the doctor will say it’s a boy or girl depending on their understanding of the baby’s body. This is their sex category.

Does anyone think that this is a developmentally appropriate way to teach third graders, 7 and 8 year olds the alphabet? The state of North Carolina doesn’t. There are 13,690 words that start with the letter S! I think our schools can do better than this.

There’s lack of transparency in the curriculum and parents’ rights have been stripped. Boundaries are being crossed without parental consent. Parents should always have a say in their children’s education.

What about the letter N for No? No thank you to curriculum that does not provide our children the foundational skills appropriately required by the North Carolina Standard Course of Study. We must do better for our children! Please address the learning loss and the failing proficiency level issues and focus on the core curriculum. In order to be successful students must master these things first- the things that are developmentally appropriate for their grade level per the state of North Carolina.
Our focus needs to return to student success