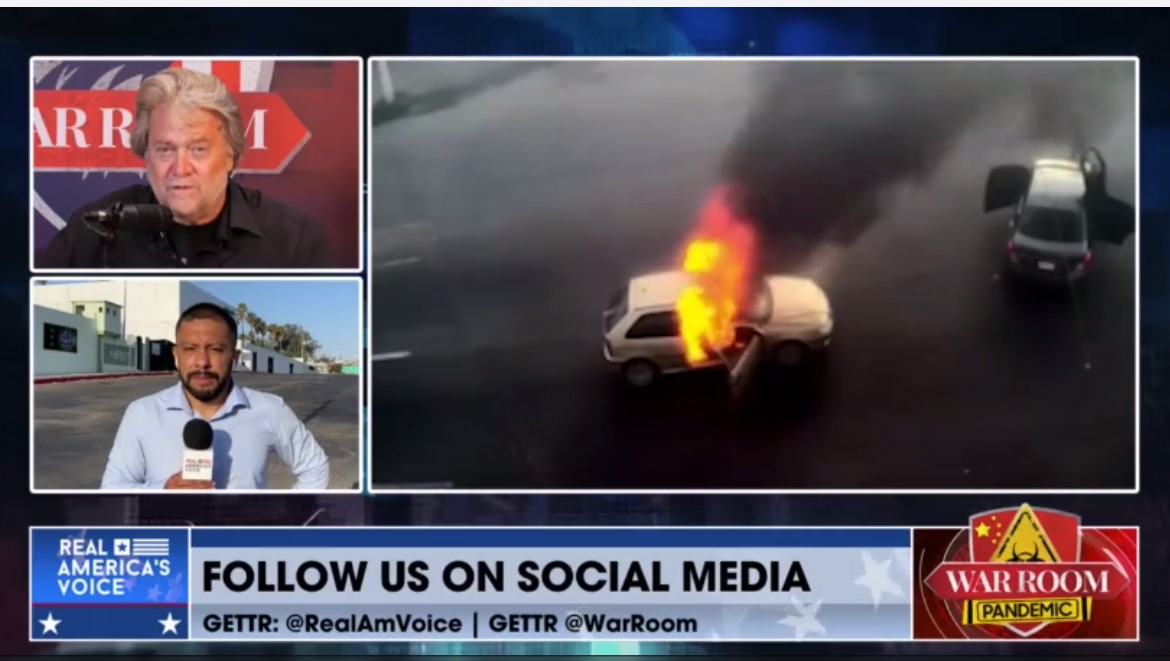 Oscar El Blue Ramirez, from Mexico, a Real America’s Voice correspondent, visited with Steve Bannon, the host of the War Room to talk about what Bannon says is proof of a failed state there, which is going to impact and change the next 100 years for the United States of America.

Bannon has repeated for months that proof his analysis is correct is shown by how close violent cartel uprisings, which are happening currently, are occurring so close to American cities.

Ramirez, who is on the ground in Mexico, is helping Bannon to see all of the details up close.

The current violent uprising of Cartel- combined with the consequences of Democrat Joe Biden’s open borders, the weakness of the Mexican president, and the global- UN-led- and migrant movement that Ramirez is an expert on breaking down- spell trouble for the North American continent.

Bannon routinely explains why the ‘neocons’ who want US resources all over the world creating new business deals for the government elite- are opposed to the America First movement, who want resources to stay focused on improving the quality life for Americans and the ‘hard-working people of Mexico.

This next video is another great example of what Bannon means when he says- “America First agenda”.

BANNON: Let’s go to one of those suburbs, Tijuana, Mexico, and our own Oscar El Blue Ramirez. Give us an update on the Cartel Wars that are now on the northern border of Mexico, sir.

RAMIREZ: “There has been more cartel, activity, and more violence.”

Ramirez described for Bannon the buses and autos that were set on fire throughout Mexico. One national Mexican leader made a statement, according to Ramirez, and said that “the Secretary General of the National Defense has given statement and you’re going to say, this is ridiculous.”

RAMIREZ: Luis Cresencio Sandoval said that these acts were only acts of vandalism, and it’s just a problem between cartels, this is not taking responsibility. So our government is not saying what the reality is, that violence and insecurity has gotten out of their hands.

Ramirez explained to Bannon about the local politics int he area where the President is being weak and permissive of the Cartel’s violence and the where the local Governors are demanding action, causing a conflict in the government ranks.

Ramirez told Bannon:
“As you see the military behind me there in full activity. As they are coming out, we are outside of the military headquarters, serves as the headquarters for where the war against the cartel continues- just steps away from San Diego, California, in Tijuana and also in Ciudad, on the Juarez border that is connected.”

Listen carefully to Bannon and Ramirez talk about the local political context to the drug cartels in the video and why Bannon says it is important for what he sees is the future of this battle to keep Mexico and the USA safe from the violence of the cartels.

Oscar Ramirez: The Cartel Wars Must Be Addressed By The Military For The Safety Of Citizens https://t.co/CRVE7hGmjJ