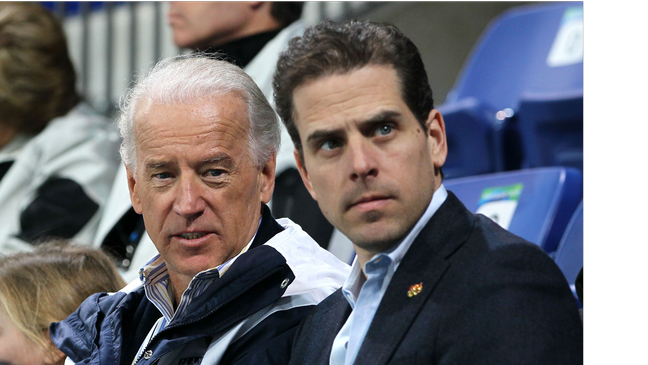 Two Chinese men, Patrick Ho and Ye Jianming, who are connected to both James and Hunter Biden- are back in the news again this month as new documents tie the Biden family to grave national concerns. Now so many data points are exposing criminal schemes between the parties, that there is no way for the Biden family and supporters to deny their involvement, and the leftist media has been forced to accept the cold hard facts about the ‘First Family’- the Bidens were helping the Chinese in influence-peddling.

Listen to US Senator Grassley’s breakdown many documents and records:

The newest documents expose the Bidens’ complex financial ties with Ho and Ye that show a connection to a Chinese influence operation that likely represents a counterintelligence threat.

Bank records show that over 14 months in 2017 and 2018, a Chinese firm, CEFC China Energy, founded by Patrick Ho’s Boss- Ye Jianming, and whose nonprofit wing was run by Ho, paid $4.8 million to an investment vehicle controlled by Hunter Biden. During that same time frame, Hunter Biden’s firm transferred $1.4 million to James Biden’s consulting firm, according to bank records and a report released by Sen. Charles Grassley, R-Iowa, ranking minority member on the Senate Judiciary Committee.

Ho was arrested in 2017 by FBI agents and charged with an audacious plot to hand out millions of dollars in bribes to African leaders in exchange for significant energy contracts that appeared to advance the Chinese Communist government’s interests.

Ho’s indictment and later trial and conviction in federal court was a revealing portrait of Chinese influence-peddling that included allegations that Ho arranged to broker arms deals — including the sale of rocket and grenade launchers — to countries in war zones in Africa and the Middle East.

“There was one noteworthy detail about Ho’s global wheeling and dealing that went unmentioned in federal court documents or Justice Department press releases at the time. During the same period that the FBI was pursuing him for his role in the global bribery scheme, Ho and his boss, Ye Jianming, a billionaire oil tycoon with past ties to a front for the People’s Liberation Army, had entered into a business relationship with two members of the Biden family — President Biden’s son Hunter Biden and the president’s brother, James Biden,” Yahoo News reported.

As Yahoo News first reported, when Agents arrested ho at JFK, the first call he made was to James Biden.

Thanks to access to Hunter Biden’s laptop, the connections between all parties can be validated and have finally been authenticated by the reluctant left-leaning media-Washington Post. New York Times, a full year and a half after Independent media verified these stories.

Republican Senators and Congressional members have been exposing bank records and other documents, revealing a high-dollar money trail that flowed from Chinese interests to Hunter and James Biden and now appears to be at the heart of an ongoing Justice Department criminal investigation.

Just two months before Ho’s arrest, Hunter Biden- who is a lawyer- signed a retainer agreement to represent Ho, according to emails that have been exposed.

Grassley separately obtained bank records showing $1 million was paid to Biden in March 2018 for the representation, curiously hinting that it was a payment to Hunter for work that didn’t exist.

In a May 11, 2018, audio recording of a conversation with an unidentified woman found on the laptop, Hunter Biden complained about getting a phone call from a New York Times reporter asking about his representation of Ho.

He is “literally the f***ing spy chief of China,” Biden says to the woman, clearly overstating Ho’s role.

In the same conversation, Biden also talked about phone calls he had gotten from his father about media inquiries into his business affairs. And he complains that Ye, who he refers to as “my partner” and “the richest man in the world,” had recently gone missing in China, and he could not get in touch with him. (Ye, who apparently ran afoul of Chinese President Xi Jinping, has not been publicly seen or heard from since.)

“There’s no question that Chinese intelligence services look for every possible opportunity to get close to family members of high-ranking officials,” said Frank Figliuzzi, former chief of the FBI’s counterintelligence division. In the past, Figliuzzi had expressed skepticism about stories in conservative media about Hunter Biden. But now, he adds, “I believe that the information we’ve learned is something that merits a review by the counterintelligence arm of the FBI.”

There’s “no doubt Hunter presents CI [counterintelligence] vulnerabilities,” says another former senior FBI official, who asked not to be identified by name, discussing sensitive matters relating to the Bidens. But those issues received less scrutiny during the Trump years because Trump and his own family had multiple business interests with foreign governments, which he used his power as president to bolster.

For more information on Patrick Ho:

Flashback to before the 2020 election… https://t.co/zjhEFZo57t