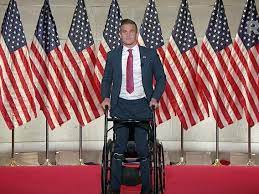 Politics has been pretty brutal in North Carolina during the three weeks of primary voting, which ends on May 17th.

The political opponents of US Rep. Madison Cawthorn appear to be in a grave panic as the days draw to an end for them to get their people out to the polling locations.

Madison rides out the storm level against him by fighting back. Check out his pushback. Love it!

Instead of selling their superior ideas for the people and public policy, the brigade of Never Trumpers and party establishment RINOS are focused on the politics of attacks, smears and personal vendettas against the young Congressman.

But he isn’t giving up. And he has support. The Republicans for National Renewal posted in defense of Cawthorn:

The political attacks have been vicious, personal, and nasty and reflect the betrayal of many people Cawthorn must have trusted along his journey into politics.

Many of the attacks are childish and immature and include private details of his life that were obviously never meant for public consumption.

That is how disgusting this group of people are, who are taking the entire political process into the gutter- for their personal agenda.

And it is not the left who is doing this. These people call themselves Republicans. North Carolina is in its primary election to find out which Republican will proceed to the General election in November.

Someone with some money must be behind the plot to displace the Trump-endorsed Cawthorn; that much is pretty obvious to the public.

The plots of the cry babies who want to hold on to their political power- may in fact, backfire.

For example, Cawthorn has grown his social media account on Twitter by 80,000 new followers since last week, when the political ads against Cawthorn reached a new and sick level.

Gosar who is not immune from being attacked, posted in Cathorns defense:

Get out and vote North Carolina.