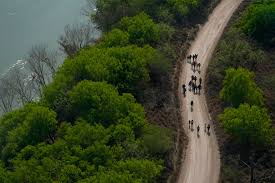 Ben Bergquam, a correspondent for Real Americans Voice and host of Law and Border, got an exclusive interview that exposes the distrust between the law enforcement agents on the ground- dealing with the invasion- and the Democrat Biden administration officials who have betrayed America’s first responders on the border.

“Scary truth from Brewster County Texas Sheriff Ronny Dodson. Every day the percentage of illegal alien gotaways grows because of #BidensBorderInvasion! It’s time for the people to act or the government won’t!” Bergquam posted along with a clip of a recent interview during a drive along with Dodson.

Dodson told Bergquam about his concerns about people who have escaped surveillance as they entered into the country illegally- called ‘Got Aways”.

The got-away numbers have caused a lot of tension in DC between at least one Republican who is concerned about what looks like an invasion- and members of the Biden administration, who appear to be helping people invade the country- as reported.

Fox News reported in late April 2022, “Homeland Security Secretary Alejandro Mayorkas testified Thursday that there were more than 389,000 “gotaways” at the U.S.-Mexico border in Fiscal Year 2021.

The disclosed figure came during an intense back-and-forth between Mayorkas and Rep. Victoria Spartz, R-Ind., during his testimony at an oversight hearing before the House Judiciary Committee.”

Bergquam exposed the concern of many political watchers- that the number that was given by the Biden administration was much, much lower than reality. They collectively suspect that the Democrats are just not willing to admit the reality of very high numbers of illegal invaders.

“Catching getaways or couningt getaways is what sometimes people need to look at. We have no clue how many we have. We find an abandoned backpacks on the side of the highways and stuff all the time,” Dodson said told Bergquam.

” And you’re saying you were saying earlier, you think you might be missing 70% of it,” Bergquam said.

“Oh easy- easy. That may even be too low of a number,” Dodson said.