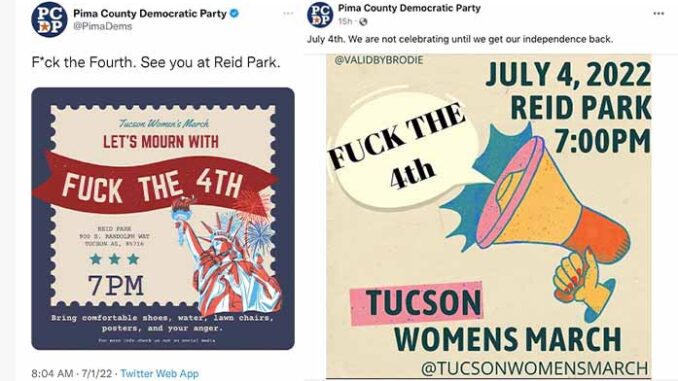 Democrats in one Arizona County are so furious about abortion going back to the states for legalization that they want to overthrow the entire Republic- on the 4th of July and cancel American’s independence Day.

The radical left in Pima County is so angry that they made a rage-filled post and graphic- and got their allies to repost their content- which- in return- received so much outrage that some groups took the graphic down- but the organizers didn’t cancel the seditious event on the nations top holiday reminder of freedom and liberty.

That may be because the event is a national movement that comes from a bigger organizer (Sorry for the graphic lanuage).

National Movement by the debased Women’s March that gave us the ‘pussy hats’:

If we don't have bodily autonomy and independence, then #FuckTheFourth. pic.twitter.com/q74WP2Ica4

The revolutionaries wanted to “F–k” the fourth of July. Surely there is a joke in there somewhere- but I digress.

One Arizona Republican candidate for governor said that the Democratic Party’s tweet about ‘F–king the Fourth of July” at an upcoming event is an example of the ‘modern Democratic Party’  seemingly pointing to the Democats-RINOS left and their push for elite government authoritarianism and tyranny.

The news  made Fox News headlines – after they caught up with the “A local Arizona Democratic Party deleted a tweet promoting an event called “F–k the Fourth.”

Karrin Taylor Robson, a Republican candidate for governor in Arizona, tweeted in response to the event that “This sickens me,” adding the event is an example of “the modern Democrat Party in a single tweet.”

“There it is – the modern Democrat Party in a single tweet. Arizona patriots will gather w/ friends/family on Independence Day to celebrate our nation’s birth & honor those who sacrificed for our freedom. But these Democrats will be doing something very different. Shameful,” Robson said.

Conservatives were quick to criticize the tweet, with one person saying that the county Democratic Party is “digging themselves” into a hole.

“Pima County Democrats must be in the shovel business with the hole they’re digging themselves into,” Cameron Arcand, a writer for Red State, wrote.

The event, which the now-deleted tweet said was being hosted by the Tucson Women’s March, was promoted by the Pima County Democratic Party on Twitter.

“F–k the Fourth. See you at Reid Park,” the tweet read.

“Bring comfortable shoes, water, lawn chairs, posters, and your anger,” the event description reads, which is common the group’s post.

In a follow-up tweet thread, the Pima County Democratic Party said that posting the graphic was a “mistake,” but said it still supports the “F–k the 4th” event.

“PCDP posted a graphic advertising a women’s march which, we agree, was in poor taste. We were eager to share the event, and in our haste we used the graphic provided by the event organizer. That was a mistake, and we will do better,” the Pima County Democratic Party tweeted. “Make no mistake, however. We support the event which will be on July 4 at 7 pm at Reid Park. The event was organized to help women in our community grieve for the loss of their bodily autonomy, which we consider an elemental right.”

They also said that while the graphic “upset some people,” the outrage should be saved for “the women in this state who will die of botched abortions.”

“Our posting of the graphic upset some people. We urge you to save your outrage for the women in this state who will die of botched abortions. Arizona is not a good place to be a woman right now,” the group said.

The Tucson Women’s March has posted multiple retweets of other users tweets with the hashtag “#F–kthefourth.”

“This July4th won’t be the same, it will be a solemn occasion. We have lost rights,” one retweet states.

“I will not celebrate a country that doesn’t recognize my rights to my own body,” states another.

“This is the county I’ve fought singlehandedly for nearly 3 years. Tucson is a communist city-state,” Kelly Ward told me.

Ward has been in an epic battle with the Pima County local government for years over their attempts to control him- in what Kelly says are Communist Tactics.

And he may be right- his country Democrats are definitely pushing some very strange things.  Consider this story that Valiant News reported about a group that promoted an anti-American event on the 4th of July:

“On Friday, the official Twitter and Instagram accounts of the Pima County Democrats invited people to an event on Monday, but not to celebrate America. In fact, they declared that people should “f*ck the Fourth” instead.

The event was organized by the Tucson Women’s March, and is set to take place at 7PM on Monday in Reid Park in Tucson, Arizona. The poster for the ‘F*ck the 4th” party says that people should bring “comfortable shoes, water, lawn chairs, and your anger.”

That is the same Women’s march that promoted a ‘rage fest’ on their social media earlier in the week over the US Supreme Court ruling on Abortion:

“Today, after 50 years of legal precedents affirming the Constitutional right to abortion care, an illegitimate Supreme Court has overturned Roe v Wade and Planned Parenthood v Casey in one earth-shattering decision. As it applies to abortion rights, Roe was the floor, not the ceiling, and now they have ripped the floor out from under us.

We won’t go back.

We are hitting the streets THIS EVENING as part of a nationwide response. Unlike our previous marches and rallies, we do not have a set agenda for this snap action. We are providing space for all of our responses to injustice, and we will do our best to make sure everyone stays safe and hydrated. We have shown grief, we have expressed our anger, now we unleash our primal scream- shaking the foundations of the establishments who seek to oppress us.

This evening, we are facilitating two options for response.

For those who have access to Downtown Tucson, we will be meeting at the Federal Courthouse at 405 W. Congress Street at 7 pm. We will gather and wait for people to arrive, make a brief statement, and then allow the demonstration to evolve organically. If you intend to participate in this action, we recommend parking at El Mercado and riding the streetcar into Downtown Tucson.

Our second snap action is a sidewalk sign holding along Broadway between Alvernon and Randolph Way. We encourage people to utilize Reid Park for the most accessible parking.

Both of these events will take place rain or shine. Please wear comfortable shoes, bring plenty of water, signs, bullhorns, and your fury.“

One man name Kelly Walker has been battling the local government in a Communist Style Cancel Culture war against his family and small business called Viva Coffee.

“Tucson is a Marxist city-state, and these people are brutal,” Walker told me about his hometown, where he has been under direct attack by the local government for close to three years- as a small business owner who refuses to submit to the Democrats and their power grabs over COVID.

Walker has been struggling to keep his coffee shop open after numerous devastating blows against him- all battles designed by the left to keep his patriotic business shut down.

“Some of my customers say that Viva Coffee during this cancel culture battle is like the Green Dragon Taven during the Revolutionary War,” Walker told me when describing what the Pima County Democrats have done to his employees, his business reviews, his friends and family and to him personally.

Yet still he stands.

The movement against the 4th of July has been growing for years- RT reported in 2020:

“The stark contrast between liberals and conservatives reacting to the Fourth of July on social media magnifies the deep cultural wedge in the US, with the left calling the holiday a “sham” and the right mourning what once was.

While Independence Day is typically a time for celebration in the US, it’s taken a different turn this year amidst the Covid-19 pandemic and Black Lives Matter protests.

The hashtag “F**ktheFourth” is trending on Twitter, with the “u” in the curse word cleverly switched out with a “v.”

“There is NOTHING to celebrate today. America is a failed state,” podcaster Ryan Knight tweeted, highlighting growing poverty in the US.

“What r we celebrating? Kids in cages? Police brutality? COVID? Poverty? No healthcare? Ur celebration is a sham.  Ur greatness? Ur rejoicing is empty. Ur shouts of liberty & equality? Hollow. A thin veil to cover up crimes that would disgrace a nation of savages,” another user added.

The frustration has been repeated by many others, who have kept the phrase popular on Twitter.

But as is typical in today’s divided culture, conservatives have responded to the hashtag by expressing the opposite sentiment, highlighting the positives of the US and shaming those trying to cast the holiday in a negative light.

“The men who signed the Declaration of Independence put their families and fortunes on the line so that 244 years later a bunch of morons living in the greatest country to ever exist could tweet #F**kTheFourth. Imagine what they’d be thinking right now,” tweeted Republican senate candidate JT Lewis.

“Now we have #F**kTheFourth trending, so this is a reminder of just how disgusting and ignorant/sh**ty the left truly is,” actor and outspoken conservative Antonio Sabato Jr. added.

The divided messages follow a Friday speech given by President Donald Trump at Mount Rushmore, where he blasted “cancel culture” and “left-wing fascism” while protesters called the long-standing monument itself an example of historical racism in the US, a theme central to the demonstrations across the nation in the wake of the death of George Floyd..

CANCEL CULTURE IS ON THE BALLOT

One of the things the left hated the most about President Donald J. Trump was his push against Cancel Culture: