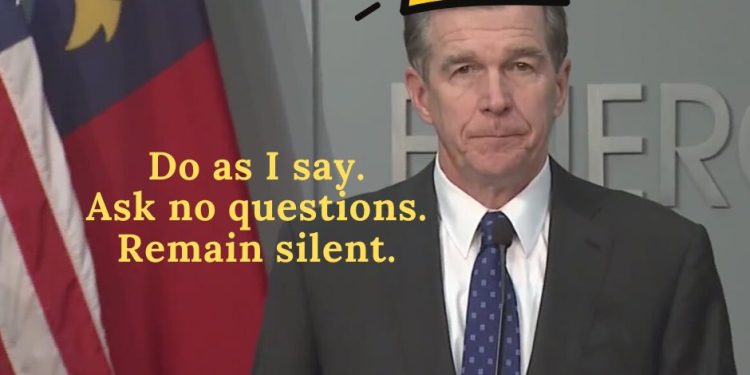 People in North Carolina are asking their public servants- ‘what changed?’. after two years of trying to understand the decision-making process of radical far-left  Democrat Governor Roy Cooper, who appears to make COVID restriction demands on the people of North Carolina by pure whim and personal feelings.

Notice that Cooper never offers any linear information about how he reaches his decision on whether or not to force people to wear masks. He just says so- and his political people follow.

To personal attacks and abuse on parents like this just days ago in 2022:

To discussions about never-ending masking, that went viral around the country:

To- masks being lifted with the passage of General Assembly Bill called- Free The Smiles, making masking optional- in the blink of an eye.

Propagandists at ABC say “Metrics” is the reasoning behind the mysterious and sudden change in course for the state- but those “metrics” are curiously not readily available for people, even when people beg for the metrics.

Parents at their local school boards, in counties like Wake Co the top 10 largest school districts in the country, with over 160,000 children- have begged and pleaded with their school boards for metrics and understanding of how elected officials are determining the masking requirements for little children- and have gotten abuse- for asking.

On the same Tuesday, when the official Wake County School Board meeting was held, those parents were once again denied any satisfaction, information or change in mask policy for their school-aged children.

Then Wednesday the Free The Smile Bill was immediately passed- and everything started changing.

And on Thursday the masks were just lifted:

The sudden changes came at the same time as political reports hit the news waves that Democrats have overreached with their COVID restriction demands.

EdNC.Com reported on the details:

Policymakers in Raleigh took steps toward lifting mask mandates in schools on Thursday.

He said masking and gathering limits were the best tools available at the beginning of the pandemic, but they aren’t the only options anymore with PPE, testing, and vaccinations widely available.

This doesn’t necessarily change much — local school boards have had the authority to set their own masking rules since Cooper lifted his executive order last spring. However, at the same time that Cooper made this announcement, the state legislature passed a bill that would go even further.

The bill, Senate Bill 173, would allow parents to opt out of local mask mandates for their children.

They wouldn’t have to give an explanation, and the bill also says unmasked students should not be treated differently. The bill does not apply to school staff.

Cooper did not say on Thursday whether he would sign this bill. He emphasized that local control is important and has concerns that the bill is “unwise and irresponsible.”

“Are we going to let people pick and choose what public health rules they’re going to follow?” he asked. “I’ll review it, but I certainly have concerns about what I’ve heard.”

The bill is an updated version of last summer’s Free the Smiles Act, which was a measure to allow local education boards to make their own mask rules.

Now that schools are in the third year of this pandemic, N.C. House Speaker Tim Moore, R-Cleveland, and other Republican lawmakers said parents should have the ultimate authority to decide if their child wears a mask in school.

“But most importantly,” Moore told the House K-12 Education Committee on Thursday, “[this bill] is going to reaffirm the absolute right that parents should be the one making these decisions for their children and not the government.”