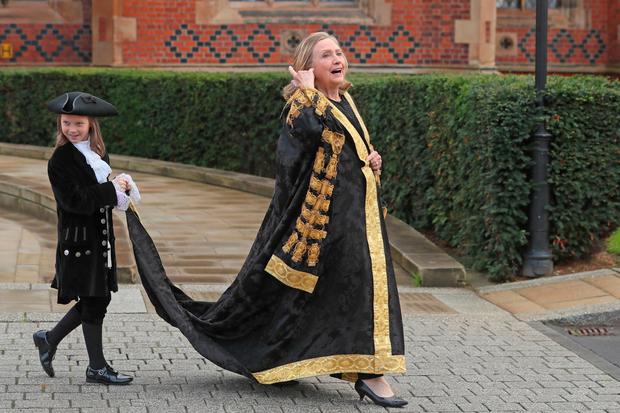 ‘It’s all a vast right-wing conspiracy against me!’ Hillary Clinton is heard saying throughout her long maniacal political career – including currently as she stands before the American people- unafraid to claim her victimhood over what mean people did to her.  That sweet little innocent lamb.

What Clinton did is far more impactful, illegal and criminal than Watergate- and the left loves Hillary for it- and the media, instead of inflating a false story- like they did in Watergate- is hiding a real story, to protect this sweet little innocent lamb.

US Rep. Ronny Jackson sounded off about what is unfolding in Clinton’s newest  public political scandals:

Always the victim, Clinton appeared in public a few days ago- to respond to the Special Counsel’s official government report that showed Clinton most likely committed the most heinous crimes against the American people- in our lifetimes- and this is what she said about the John Durham report on her illegal activities:

“We can’t get distracted. Whether it’s by the latest culture war nonsense or some new right-wing lie on Fox or Facebook,” two-time failed presidential candidate Hillary Clinton told a crowd at the 2022 New York State Democratic Convention. “By the way, they’ve been coming after me again in case you might have noticed. It’s funny, the more trouble Trump gets into, the wilder the charges and conspiracy theories about me seem to get.”

REMEMBER WHEN POOR HILLARY CLAIMED HER HUSBAND HAD SEX WITH AN INTERN BECAUSE OF THE ‘RIGHT-WING CONSPIRACY?

Everyone is against me! Clinton claims. And we political watchers know exactly when this started, right? Poor, poor Hillary.  The Washington Post poor Hillary’s abuse in 1998.

First lady Hillary Rodham Clinton yesterday launched a vigorous counterattack on behalf of her husband’s beleaguered presidency, declaring that the president is the victim of a “politically motivated” prosecutor allied with a “vast right-wing conspiracy.” Using a nationally televised interview as her forum, she assumed a familiar and crucial role as Bill Clinton’s first defender. She said she knew him better than anyone in the world, still loved him, and fully believed his denial of allegations that he had entered into a sexual relationship with a White House intern and had urged the young woman to lie about it.

The National Review reported on Hillary’s continued long streak of bad luck- you know- just not being able to catch a break- even though she is the most wealthy- well connected – career civil servant on Planet Earth:

“Hillary, of course, famously went on the Today Show and claimed that a “vast right-wing conspiracy” — a phrase that was probably cooked up by Democratic consultants — was behind allegations that her husband had been messing around with a young White House intern named Monica Lewinsky. Sure, Hillary had known about Gennifer Flowers and Paula Jones, and scores of others, but the wisest woman to ever have deigned to trod among us argued that the very idea that her husband would have an affair was driven by a “mean-spirited” imagination and her conservative adversaries (among them, apparently, her husband’s attorney general, Janet Reno). It was all true, of course.

What Happened: The long list of who Hillary Clinton blames

Clinton blames everyone she can for her diabolical; and epic political powergrabs.  Considered the long list of people- on her side- who she blames for her failures:

On James Comey:
“If not for the dramatic intervention of the FBI director in the final days we would have won the White House.”

“I never imagined that he would have the audacity to launch a massive covert attack against our own democracy, right under our noses – and that he’d get away with it.”

“I do wonder sometimes about what would have happened if President Obama had made a televised address to the nation in the fall of 2016 warning that our democracy was under attack. Maybe more Americans would have woken up to the threat in time. “

“Many in the political media … can’t bear to face their own role in helping elect Trump, from providing him free airtime to giving my emails three times more coverage than all the issues affecting people’s lives combined.”

On Bernie Sanders and The Bernie Bros:

“His attacks caused lasting damage, making it harder to unify progressives in the general election and paving the way for Trump’s ‘Crooked Hillary’ campaign.”

“There were more than enough Stein voters to swing the result, just like Ralph Nader did in Florida and New Hampshire in 2000.”

“This has to be said. Sexism and misogyny played a role in the 2016 presidential election. Exhibit A is that the flagrantly sexist candidate won.”

“He was quite successful in referencing a nostalgia that would give hope, comfort, settle grievances, for millions of people who were upset about gains that were made by others … millions of white people.”