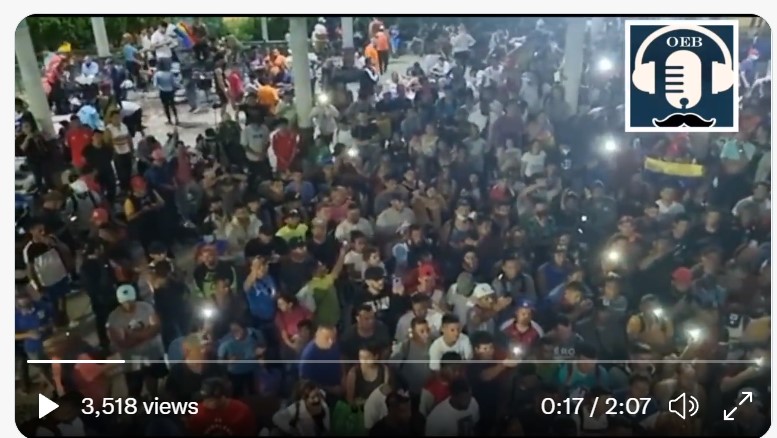 Just in time for a contentious “summit” meeting between world leaders of the “Americas” where Democrat Joe Biden is expected to open the borders of the US even wider- and where the President of Mexico refuses to participate- there is a mass migration from undeveloped third world nations headed in our direction to enter over our borders and make their home among all the free resources they can get their hands on- and possibly be settled in time to vote in November.

And how many leftist non-profits and Non-Government Organizations (NGOs) is the radical left and their Marxist revolutionary machine using to pull this off? People should be asking.

Villagran, an activist and director of the Center for Human Dignification (CDH) is a revolutionary Marxist who is being promoted as a hero.

But all he is doing is stealing from people and helping corrupt governments get away with steal from their people- and changing nothing that helps humanity.

Fox News reported on the looming disaster for the USA:

“TAPACHULA, Mexico – Several thousand migrants set out walking in the rain early Monday in southern Mexico, tired of waiting to normalize their status in a region with little work and still far from their ultimate goal of reaching the United States.

Their advocates said they wanted to call attention to their plight, timing it with this week’s Summit of the America’s in Los Angeles. It was estimated to include 4,000 to 5,000 migrants, mostly from Central America, Venezuela and Cuba.”

And we have all of the exclusive coverage of what is unfolding, which the lapdog media is ignoring, and denying to the American people.

US News and report admits, in their reporting that ” migrants set off from southern Mexico early Monday aiming to reach the United States, timing their journey to coincide with the Summit of the Americas in Los Angeles this week.”

Oscar El Blue is a correspondent for Real America’s Voice and a reporter for Border Network News has been reporting about Border Crisis for a long time from Mexico, and gives Americans another perspective of how the invasion of the United States is being orchestrated, offering validated details of the movement of migrants.

Blue’s most recent report is that 10,000 migrants are planning on getting into the United States through Mexico.

Blue described what he was seeing as, “Tapachula Mexico tomorrow the biggest caravan that has ever walked from south of the border of Mexico will start.”

The Summit for the Americas is already turning into a disaster, with the President of Mexico announcing Monday that he is refusing to participate with Biden in the Summit.