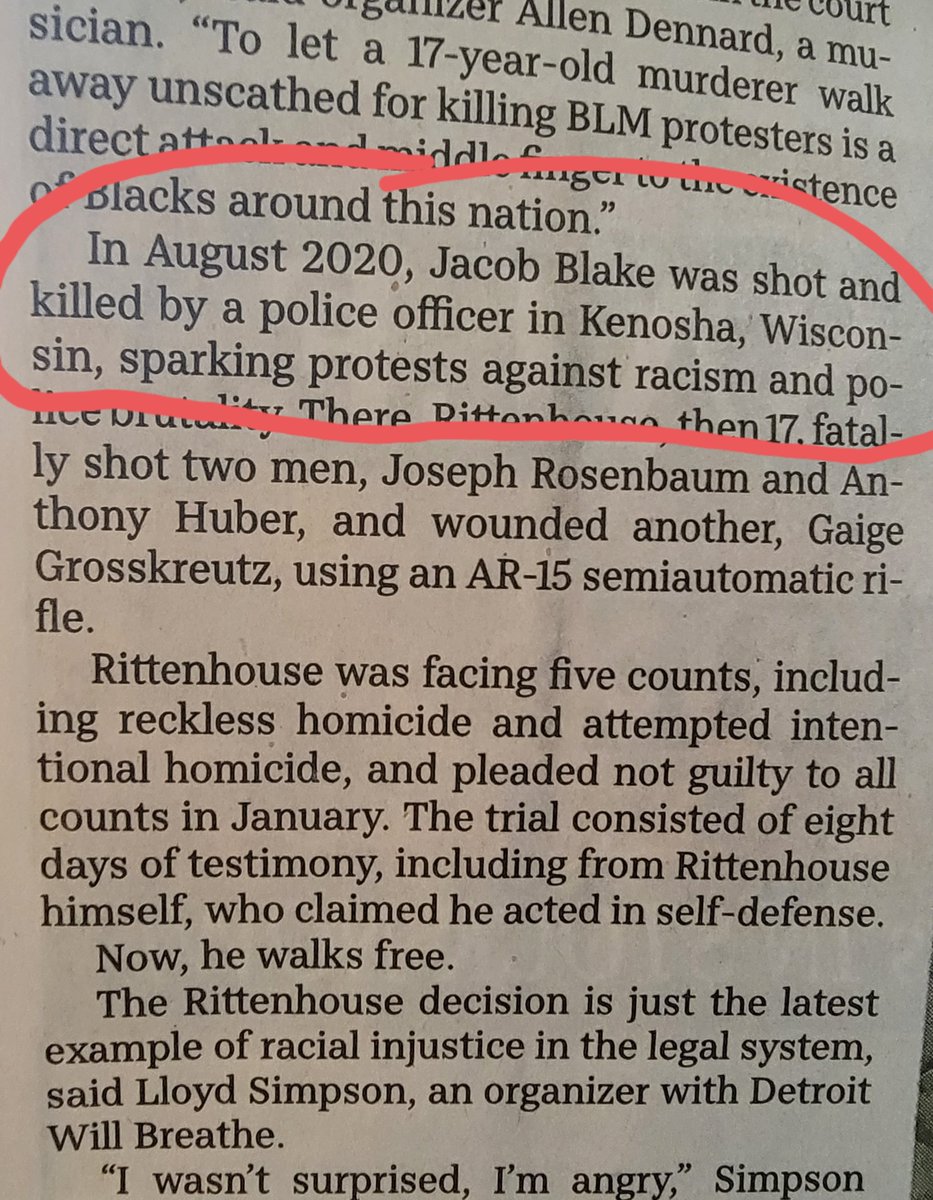 Left-leaning Detroit Free Press and talk show media entertainment outlets reported that a political icon of the left had been killed by police -when they had to have known the man was not dead because of his essential status in their community.

Key Point: On August 23, 2020, Jacob S. Blake, a 29-year-old black man, was shot and seriously injured by police officer Rusten Sheskey in Kenosha, Wisconsin, triggering a massive crime spree of looting and arson.  Small businesses were destroyed, and lives were devastated in the aftermath of the political theater by the left.  Blake emerged as an icon of the left who fundraised and pushed for favorable public policy of defunding local police departments based on Blake’s health status.

Key Point: News entertainment outlets lied about the status of Blake based upon a press statement by a Democrat operative.

The talking point that Blake had died started to surface on social media immediately after Kyle Rittenhouse, who was charged with shooting three people during the riots after Blake’s hospitalization from the police shooting, was found not guilty of numerous charges against him.

Politico traced the fake news about Blake back to a media statement given by a Democrat after the recent Rittenhouse verdict:

Moments after the Rittenhouse verdict was announced, Sean Patrick Maloney, the head of the Democratic Congressional Campaign Committee (DCCC), issued a statement denouncing the acquittal. “It’s disgusting and disturbing,” he said, “that someone was able into carry a loaded assault rifle into a protest against the unjust killing of Jacob Blake, an unarmed Black man…”

The only problem? Jacob Blake was not killed (he was paralyzed), and he was not unarmed. He was, in fact, holding a “razor blade-type knife” when he was shot. And the “protests” also included riots, vandalism, and looting that caused more than $50 million in damage and destroyed many local businesses.

The Detroit Free Press, just two days after Rittenhouse’s not guilty verdict, reported that Blake had been killed by the officer, blaming the shooting on racism and police brutality.

The Daily Mail recently reported an excellent timeline of the events that unfolded in the small Wisconsin town:

HOW THE DEMOCRATS PROPAGANDA CAMPAIGNS WORK

However, the left focused on and recited the Fake News talking point, and fact-checkers of course, did not correct anyone.

WHAT IS THE SOURCE OF THE LIE? THE DEMOCRATS

The Politico article makes another great point, the Democrats own this mess, and voters very well may push back on them:

“Even before Rittenhouse’s acquittal on Friday, it was clear that the incidents in Kenosha were going to cast a long shadow over the 2022 elections in Wisconsin. But the verdict once again highlighted the deep partisan divisions and particularly the problems that Democrats face in the crucial battleground state. And it could hurt Kamala Harris the most. FLASHBACK

Blake has been a political celebrity for the Democrats left for some time. Now that they have “killed him off” in their grand drama, that doesn’t mean he is really going to disappear from the public arena.  Footage resurfaced recently of Democrat Kamala Harris visiting Blake when he was hospitalized for his injuries, where she made a point to tell him that she was proud of him.

Now, what will Kamala say that her hero has been declared dead when he is, in fact, still alive?

Perhaps Blake is more alive than her political career?