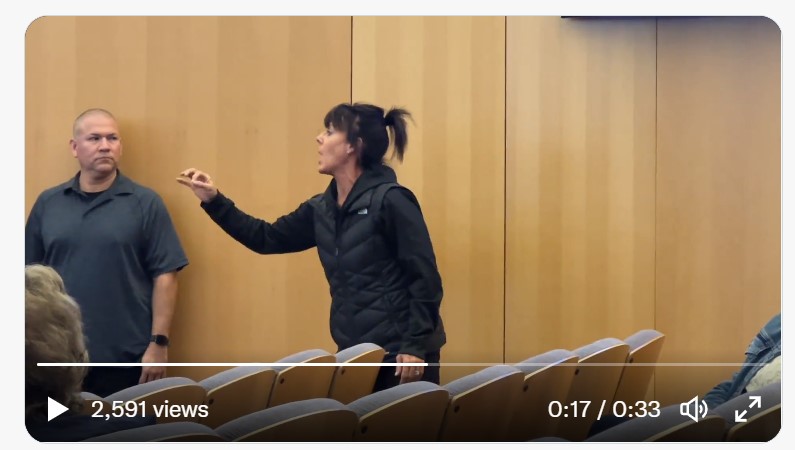 Over 500 Voters Were ‘Disenfranchised’ at One Maricopa Polling Place Alone, Election Worker Testifies
Similar issues took place at polling places across the county, potentially putting the number of affected voters in the thousands. That information came out this week from testimony from election workers.

The election officials in Maricopa didn’t care at all about the people or their concerns, nor did they feel at all moved by the testimony.

Ben Bergquam reported from the certification meeting this week when citizens were upset and Supervisors were cocky:

“Denise Babavan calls out arrogant Maricopa County Board of Supervisors for their lies just prior to them certifying their corruption!”

Denise Babavan calls out arrogant Maricopa County Board of Supervisors for their lies just prior to them certifying their corruption!@RealAmVoice @KariLake @WendyRogersAZ@RepAndyBiggsAZ @Saorsa1776 @charliekirk11 @bennyjohnson @JackPosobiec pic.twitter.com/gpnN3JQmjB

Another election worker who worked the polls at a 14-day voting center in Maricopa County — Arizona’s largest county — testified that over 500 voters were “disenfranchised” at his polling place alone.

Election day in Maricopa County was plagued by printer errors that led to long lines and a large number of provisional ballots. Multiple poll workers testified that many of these ballots were not counted due to improper training on checking voters out, while a number of others simply left due to the wait time, however. Despite testimony from multiple poll workers, Maricopa County election officials opted to certify the election.

“Ladies and gentlemen of the Board of Supervisors, I was a poll worker…. And what I will say that I’ve seen is voters this cycle have in fact been disenfranchised,” the poll worker said. “When they come in, and they bring their ballot, and they can’t turn it in because there’s a line to turn it in. Or they can’t vote, because they were told they cannot check in because they were not able to properly check out at the previous polling center they were at, because we, as poll workers, were not taught how to check out voters at our poll centers,” he continued.

“So if a tabulator goes down and they have to come to our poll center, you know what this means. It means they are still checked in at another poll center and given provisional ballots that are not being counted.”

The poll worker went on to say that only a fraction of nearly 700 voters lined up outside his polling place were able to vote due to the issues and wait times. “And then at my poll center, where we literally had at 7 pm on Election Day 675 people waiting in line. Out of 675, do you know how many came in? 150.”

Election day voters in the state’s largest county were greeted by long lines due to what the Maricopa Board of Supervisors later described as a “printer issue.”

Voters were told that they could either come back later in the day, or submit a provisional ballot that would be “taken downtown” and counted later. The long lines prompted some voters to leave, however, due to other obligations and time constraints.

On Election Day, officials announced that about 20% of tabulators at county polling sites were malfunctioning. The “printer issue” affected roughly 17,000 ballots, which were ultimately counted, the Maricopa County Board of Supervisors has claimed.

“Every single one of us who’s a poll worker right now is making fun of you” pic.twitter.com/HjXrWM50Bx

That figure does not account for voters who left due to the issue, which according to the 14-day center poll worker, affected over 500 voters at his polling place alone.

Despite the irregularities, the board voted to certify the election anyway, with board chair Bill Gates delivering a lengthy statement in defense of their integrity