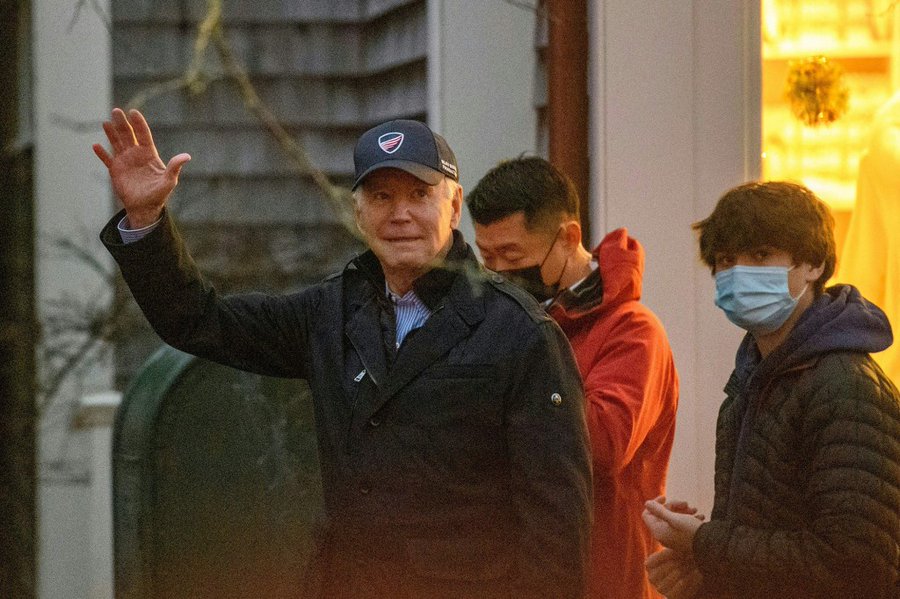 Democrat Joe Biden was seen over the Thanksgiving holiday break-out shopping in an exclusive Nantucket boutique and maskless at a time when Americans are facing oppressive mask mandates as well as the dire consequences of his disastrous leadership.

Biden was out celebrating his freedom, while Americans at home were facing mask and vaccine demands- out-of-control prices, lack of business opportunities, and general conflicts with loved ones over a painful and divisive cultural revolution.

Key Point: Americans are being misled about masks. Biden is maskless at the same time parents are arrested for being maskless at school board meetings.

“Joe Biden was spotted shopping inside a store over the weekend without wearing a mask which he has repeatedly urged Americans to wear.

The president was seen inside Murray’s Toggery Shop on the island of Nantucket Saturday with his mask around his neck and not covering his mouth despite a visible sign outside the door instructing patrons to wear a mask.”

“Biden has been criticized several times for not following local mask mandates while urging Americans to wear a mask, including at an upscale Washington, D.C. restaurant in October where he was spotted walking through the eatery without a mask.

In November, Biden was seen mingling with members of the public without a mask before putting it on for a photo-op.”

Not all Americans have the equal right to ignore mask mandates, and that should cause people to consider who it is they vote for:

Watch as parents are removed from a school board meeting in Georgia for disobeying a mask mandate.

Two mother's arrested at Gwinnett County Public Schools district HQ
in Georgia for not wearing a face mask, the parents were there to Ex
press concern at mask mandates Critical Race Theory when they we pic.twitter.com/LCPbcr5Qlu

11-Alive reported on the arrests:

“A Gwinnett County Public Schools board meeting had not even started yet Thursday night when two moms were stopped and arrested on their way in. Both Karen Prinkle and Brenda Stewart say they were there to advocate for their children, but neither expected to be taken to jail.

Cell phone video shows Karen Prinkle as she tried to enter the meeting while not wearing a face mask. She says she was banned by the school board for 12 months after not wearing a mask at the October meeting. ”

“You can call me a Karen, you can call me whatever you want– I don’t care, I’m a mom who is so frustrated that my child comes home with headaches every day,” Prinkle said.

Prinkle said at this point, masks no longer make any sense and she does not think it’s good for the children of the district to be forced to keep wearing them.

“I understand why we first started the masks but there’s no need for them now and that’s why I took the steps I did, did I think they would arrest me I don’t know,” Prinkle said.

While she was being handcuffed, Brenda Stewart was in line behind her. Stewart says they didn’t really even know each other until last night, but when Prinkle yelled out for someone to please grab her phone, Stewart wanted to help. That’s when Stewart says she quickly put down her bag and walked through the metal detector to get Prinkle’s phone for her.

And that’s when a school resource officer looked in Stewart’s bag and found her crochet tools, including a small pair of round-tip children’s scissors.”

Stephen Miller busted Biden even further, and it shows that when you are an elite Democrat- you get to do whatever you want to do. If you think that is unfair- thank a Democrat. They got us into this mess.

They have no idea why they're even doing this anymore and zero reporters will ask him what his mask policy is. "Well if he wants to wear one!"