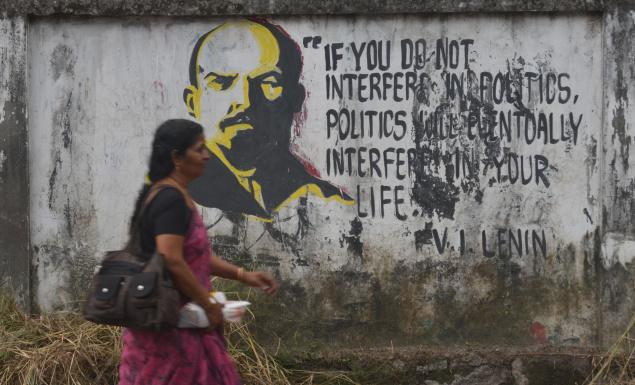 Americans are finding out the painful way that with Democrat Joe Biden- we are Global citizens, in a Communist-dominated push for One World Government, with a One World Religion, to bring about control of all human capital and natural resources- called: One Belt- One Road. All in time for the 100th Birthday celebration of Communism. And there doesn’t seem to be much we can do it about it but keep trying to vote it out.

Key Point- Communism Is: a: doctrine based on revolutionary Marxian socialism and Marxism-Leninism that was the official ideology of the U.S.S.R. b: a totalitarian system of government in which a single authoritarian party controls state-owned means of production c: a final stage of society in Marxist theory in which the state has withered away and economic goods are distributed equitably Key Point: These people are crazy.

Key Point: Americans are finding that it is almost impossible to reject the control and dominance of the left, because at this point so many of their schemes are connected to our daily lives, and they know if they resist they will lose so much of what they depend on.  Many people don’t even know where to begin to resist the left because they have just recently figured out that there was a problem.  Here is some information for those who want to go down the rabbit hole, and see where the pitfalls are, still.

IT ALL DEPENDS ON WHO GETS TO DEFINE “EQUITY”

Wake up to your wildest and most evil nightmare. But, then, you can thank a Democrat voter for what we have now because the Democrats have, over decades, led the transformation of America.

This is where I start to unravel the knot:  I found a tweet from 2018 that lays out the concept pretty well and uses all of the buzz words I will lay out for readers; Curriculum, social justice, sustainable development, competency, Global Citizenship.

IT STARTS WITH SCHOOL CHILDREN AND WHAT THEIR FAMILIES WILL TOLERATE

Remember, the goal of all of the other work is that Americans become “Global Citizens.”  Understand that due to the left’s cultural revolution, which they now admit to wielding upon us-politicians have used tactics of cultural Marxism, based on the fantasy philosophy of Karl Marx, to demand Americans replace the American way of life with foreign concepts, traditions, norms, and values- just like Communist Mao did with his tactics called the Four Olds– replacing old ways with new competencies, to be proven, by students in public education and then moving outward with business regulations and then out to society in general.

The real goal of the allied left’s 100-year plan- to replace the American system of our Constitutional-Representative Republic- is because then “we the people” don’t have any power over the elite. And then, the elite have all of the control over natural resources and can keep all of the wealth for themselves. They are also control freaks and think our lives are a game for them to play with.

It is very simple, but voters get very confused and elect the control freaks they say they hate- so here we are.

The public schools are this way because parents -who have stayed there- have tolerated the shift away from academics.  Those parents accept that their child’s education is now about being approved of by a global leader who understands the all-important skill of proper virtue signaling.

Consider what parents have accepted:

Currently, schools are using surveys and digital tracking of students to track their competencies on issues such as homosexuality and trandgenderism. I have numerous investigations on those topics on this site with real-life examples of how a technology called EdTech is being forced on American families to force them into compliance with a One World vision on sexuality. Parents who know about this- and accept the invasion even though they disagree,  report that they don’t speak out because they are afraid of the consequences.

And the process of transformation is almost complete- because the left is bragging in our faces about their victory.

We lost to the left because too many Americans are Democrat voters and have rejected Western Civilization and Judeo Christian ethics, to become the esteemed Global Citizens, because that has privileges.

Some people accepted the sustainable development of the left- meaning the lasting changes- of their family, called Marxism- which is really Communism.  Some people did this because they want to be ruled by a  one-world government with a one-world religion. Freedom and liberty is messy, time-consuming and hard work.

But Global (Communist) Citizenry is deadly and as shown in the recent Travis Scot demonic concert – the culture this Global citizenry creates is deadly. Remember Communists have murdered over 94 million people.

I will show you the disastrous and deadly consequences of Global Communist choices, which led to the demonic culture swap later in the article. Let us begin with what a Global Citizen is about.

HOW DID I KNOW ABOUT THIS?

Over 20 years ago I was a part of a “Strategic Study with a public school in Pennsylvania to help develop a new process for creating curriculums and teaching systems for public education.  What I learned thereafter a year made me run out the door and start Homeschooling my children.  I have homeschooled 3 children and I don’t regret a moment of it. What I remember the most about that year’s long process was three things: 1) Children would be required to prove competency that was called “Tolerance to Homosexuality” 2) Social Justice Non-profits would be influencing the development of curriculum for more than parents and 3) The product public schools would produce was a “Global Citizen” ready for Global “Assembly line” work or community college.

EVER WONDER WHERE READING WRITING AND ARIMATHETIC WENT?

The left are experts at making small changes over a period of time, resulting in massive shifts over decades.  It has been over two decades since I first started talking about these concepts and the tactics the left would use to transform American society.

Parents must see the shift in focus, the transformation and the erosion of their rights over school districts- at this point.

I have been on this for that long, so these terms are not new or confusing to me.  Competency-based education was introduced to public schools in with the introduction of social justice non-profits, under Common Core. “Global Citizenship” is the end of American sovereignty and the voice of American voters in the American Republic.

WHERE WE ARE NOW-A COUNTRY HALF FULL OF GLOBAL CITIZENS

Global Citizenship is a real thing that is being pushed, and the evidence of the left’s victories and dominance on the minds of people are everywhere. Consider the recent headlines about the Travis Scott music festival, where even concert attendees were surprised at the demonic nature of the music, where people were indoctrinated with satanic messaging, where they were abused, trampled and some died.

The promoters of that deadly concert, Live Nation Entertainment, are hugely relevant in American culture- and they wield great authority over the public opinions of Americans. Public opinion determines support for public policy.

It begins with Music: which is a powerful cultural tool and is being used to shape Global Citizens.

Lawsuits have been filed against both Travis Scott, the performer and Live Nation Entertainment, the promoter, that show the relationship between the two- so we know they are connected.

“After two close friends died in the Astroworld concert tragedy, their families are filing wrongful death lawsuits against Travis Scott, the Live Nation entertainment company, and more. The families of Jacob “Jake” Jurinek, 20, and Franco Patino, 21, both from Naperville, Illinois, are among the latest to file lawsuits as a result of the Nov. 5 Astroworld concert tragedy in Houston, Texas, which killed 10 people and injured hundreds.”

Global Citizen concerts are a real thing. And they are pushing political control through medical tyranny, social justice activism, and enticing school children with incentives for free concerts.

Michael Rapino is the CEO of Live Nation Entertainment, is the CEO of Ticketmaster, who can determine who gets tickets to which shows, and who is on board with the Global Citizens.

EARN REWARDS FOR THE ACTIONS YOU TAKE. TICKETS, GIFT CARDS, SUBSCRIPTIONS, VIP EXPERIENCES, AND MORE CAN BE YOURS WITH GLOBAL CITIZEN.”

According to Live Nation’s website, Rapino is very influential in the sports, music, entertainment and social justice worlds:

“Michael Rapino has served as Live Nation Entertainment’s President and Chief Executive Officer since 2005. Rapino led the transformation of Live Nation into the number one live music brand in the world with operations in more than 40 countries and annual revenue exceeding $10 billion.

Now people will have to prove their competencies and tolerances to get tickets for entertainment.

FANS AND ACTIVISTS CAN NOW EARN TICKETS TO THE 2016 GLOBAL CITIZEN FESTIVAL BY ADVOCATING ONLINE VIA TWEETS, EMAILS AND OTHER SOCIAL ACTIONS

Fans and activists can now start earning free tickets to the annual Global Citizen Festival, set in New York City’s Central Park, by completing online “actions” aimed at tackling humanitarian crises such as poverty, gender inequality, hunger, and discrimination and violence against girls and women, as well as improving nutrition, education, and health services globally. To register as a Global Citizen and for more information on how to participate, visit: www.globalcitizen.org

WHO CONTROLS EVERYTHING? COMMUNIST AND TICKETMASTER DO- REMEMBER?

WE ARE NOW TRANSFORMED And that is how Global Citizenship is taught in school, and used to control people. If they want us scared, they will scare us.  If they want us rewarded, they will award us.  This process will be forced upon school children in the United States of America and all people will ultimately be made to comply because that is the nature of the collective. Many Americans abandoned their civil liberties- because they were told they would be treated better under a transformed system and that it would be cool to be treated like the rest of the world population who live under Communist control. Our only hope is that young people and their families will not enjoy being a Global citizens so much.

The United States of America may have one last and final chance to flip the crazy communist lovers and change things in 2022 in the midterm elections by electing anti-communist people to office and supporting them if they take on the fight to restore America.

Remember at the beginning I said this was all about “One Belt-One Road”? Well – Global Citizens are about to “Kick start a Global Economy”.

I hope I have given the reader a good primer.

Are you ready for this?