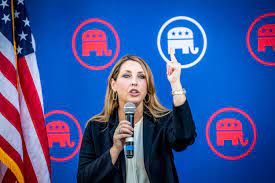 The candidates running are incumbent Chairwoman Ronna McDaniel and Harmeet Dhillon, an attorney and an RNC committeewoman whose California-based firm represents Trump.

McDaniel, the niece of Mitt Romney, has led the RNC since 2017 and is running for her third term. Based on her disappointing performance since then, multiple state GOP organizations passed resolutions calling for new leadership for the party, including Texas.

“By a vote of 62-0, the State Republican Executive Committee passed a resolution saying it had lost confidence in the chair of the Republican National Committee, Ronna McDaniel. Texas GOP votes unanimously for a new national leader,” the Texas Tribune reported in late December.

Fueled by the rejection of McDaniel, Dhillon says in interviews that she feels confident she can soothe the rising grassroots discontent after so many losses under the incumbent.

The election for RNC Chair is in just 10 days.

Harmeet Dhillon is an election lawyer from CA who has gathered impressive grassroots support among county GOPs across the US.

Ronna McDaniel is the incumbent Chair seeking a fourth term.

A survey by Convention of States Action conducted by the Trafalgar Group in late December found roughly 73 percent of Republican voters said the party should elect someone new to lead the RNC. Six percent of those surveyed said McDaniel should be reelected to a fourth term, while 21 percent said they weren’t sure.

And based on Trump’s interview with Brody, McDaniel seems to have lost her most high-profile supporter- Trump.

“Let them fight it out; I like them both,” Trump told Brody about which candidate he would choose, Dhillion or McDaniel, adding a side note that Dhillion represented him very well in legal issues.

Trump also took the opportunity during the interview to say what he wanted to see in an RNC leader.

“Honest elections is what I need,” Trump said to Brody, definaelty pushing back on McDaniel’s for her stand on voting by mail.

McDaniel differs with Trump about the legality of vote-by-mail ballots, which could be a problem that he is hinting at with the reminder that Dhillion represents him well.

In mid-December, NBC News reported, “RNC chair defends mail-in voting, even as Trump trashes the practice,” adding that McDaniel had taken “aim at those who oppose voting by mail” in a Fox News interview.

From the NBC article:

“McDaniel unequivocally endorsed mail-in balloting Tuesday, distancing herself from former President Donald Trump on an issue that is fracturing the GOP in the wake of disappointing election results this fall.

“What we do need is our voters need to vote early,” McDaniel said during a televised interview on Fox News. “I have said this over and over again. There were many in 2020 saying, ‘Don’t vote by mail, don’t vote early.’ And we have to stop that.”

In the Brody Interview, Trump contradicted what McDaniel said about how she wanted to see that elections are run:

“I don’t need help getting people. I don’t need help in campaigning. We need all paper, voter ID, and no mail-in ballots, except for the military and people that are sick. We have very dishonest, corrupt elections right now. So we need whoever is going to do the best on voting day.”