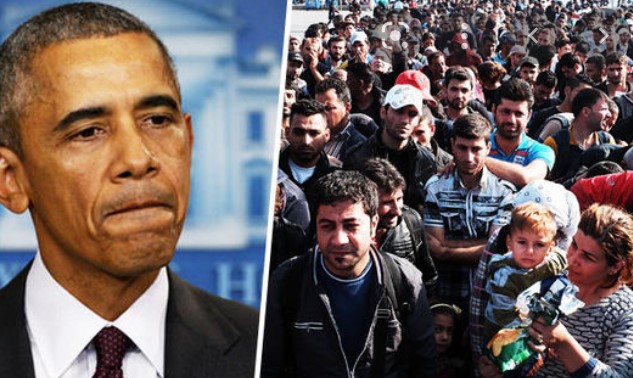 Ben Bergquam, a correspondent for Real America’s Voice, reported live from the border and painted a depressing picture of life on the Southern border between Texas and Mexico and exposed- again- how dangerous Democrat Joe Biden is making the United States.

What we know is that in 2018 it was reported that President Donald J. Trump had reduced the number of refugee migrants allowed into the country by 66% and helped put America First.

What we know now is that Biden has returned to a disastrous border policy that is a potent weapon to destroy America. The policy started before Obama, was weaponized by Obama- and then thrashed, and discontinued by Trump.

And now – of course, Biden has taken us back there, claiming it is out of some sort of humanitarian duty to the people of the world- but more than likely, it is about creating a new voting base for the loser Democrats.

“Everything they claim to be for is an absolute lie. This is a complete and intentional invasion of our country, orchestrated by the Globalist left who want to destroy this country from the inside. It goes back to Obama and before Obama with the refugee resettlement program designed to take people who have no desire to assimilate into America and put them into states and turn those states Blue and ultimately turn America into a Socialist/ Communist Country – that is what is at the heart of it,” Bergquam said, slamming the corrupt left.

“On the way there, is untold misery for the people,” Bergquam said.

“Who is at fault is the NGOs, Catholic charities, Lutheran charities and all of these Baptist activist groups who are behind, ” he said, talking about how in that one small town, of Alpine Texas, the Cartels have caused 1000% increase apprehensions since Biden has been in the White House.

Listen to his interview:

Bergquam is right about the left’s return to the disastrous Obama-era policies.

Check this out from LibJournal.com, bemoaning the Trump years:

“The United States Refugee Resettlement Program has seen many changes over the last twenty years. However, the election of President Trump and the subsequent policy distortions to the program have caused the most dramatic changes.

The almost weekly pronouncements coming out of the White House related to immigration, refugees, and international politics have left the program in disarray.

Refugee arrivals to the United States have almost come to a standstill and the entire program has begun to unravel (Amos, 2018).

The State Department’s bureau responsible for the US refugee resettlement program, Population, Refugees and Migration (PRM), released its annual report to Congress on October 4, 2017, announcing the Presidential Determination of 45,000 total refugee arrivals for the federal fiscal year (FY) 2018. This is the lowest number of arrivals coming to the U.S. since 2001, and less than half of the two previous fiscal years: 110,000 in 2017, and 85,000 in 2016.[1]“

What Bergquam is covering in this article is one of the major reasons we need to get back to Trump’s border policies.