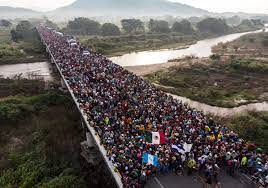 CenterSquare reported an update on the number of Texas counties who want the chaotic situation at the US Border to be declared an ‘invasion’.

Three more counties are the latest to express support for Texas declaring an invasion at the southern border, bringing the total to 32.

The judge and county commissioners of Ector County, in the Permian Basin, signed a Declaration of Local State of Disaster on Sept. 27 stating the “health, safety, and welfare of Ector County residents are under an imminent threat of disaster from the unprecedented levels of illegal immigration, human trafficking, and drug smuggling coming across the U.S. border from Mexico.”

The declaration states that the “sophisticated human smuggling and drug trafficking organizations that facilitate these criminal acts are spearheaded by violent international drug cartels who have operational control over our unsecured U.S./Mexico border.” The crisis at the border “is not acceptable, and has resulted in a security threat and humanitarian disaster with overwhelming consequences to the residents of Ector County and Texans,” they argue.

Ector County Commissioner Mike Gardner told The Center Square that even in Odessa, Texas, residents are seeing “busloads of illegal aliens coming through every day.” The county’s law enforcement and judicial system “is already up against the wall and short-handed,” he said, with not enough staff to handle the crime stemming from the border. “We have enough issues in our county without the burden of this coming through. We need help from the state to fight the amount of drugs and people coming through.”

The declaration only lasts for seven days and will continue for a longer period if the commissioners renew it.

Lavaca County Judge Mark Myers signed a declaration of local disaster that remains in effect “until terminated by the County Judge.”

It states the “the health, safety, and welfare of Lavaca County residents is under an imminent threat of disaster from the unprecedented levels of illegal immigration, human trafficking, and drug smuggling coming across the U.S. border from Mexico.”

Judge Myers cites recent CBP data that shows that more than 5 million people have been apprehended or evaded apprehension at the southern border since January 2021, including dozens on the terrorist watch list. “The unprecedented amount of human trafficking, combined with the smuggling of fentanyl and other opioids infiltrating our border,” being “spearheaded by violent international drug cartels” has created “a security threat and humanitarian disaster with overwhelming consequences to the residents of Lavaca County and Texas,” necessitating him declaring a disaster, he said.