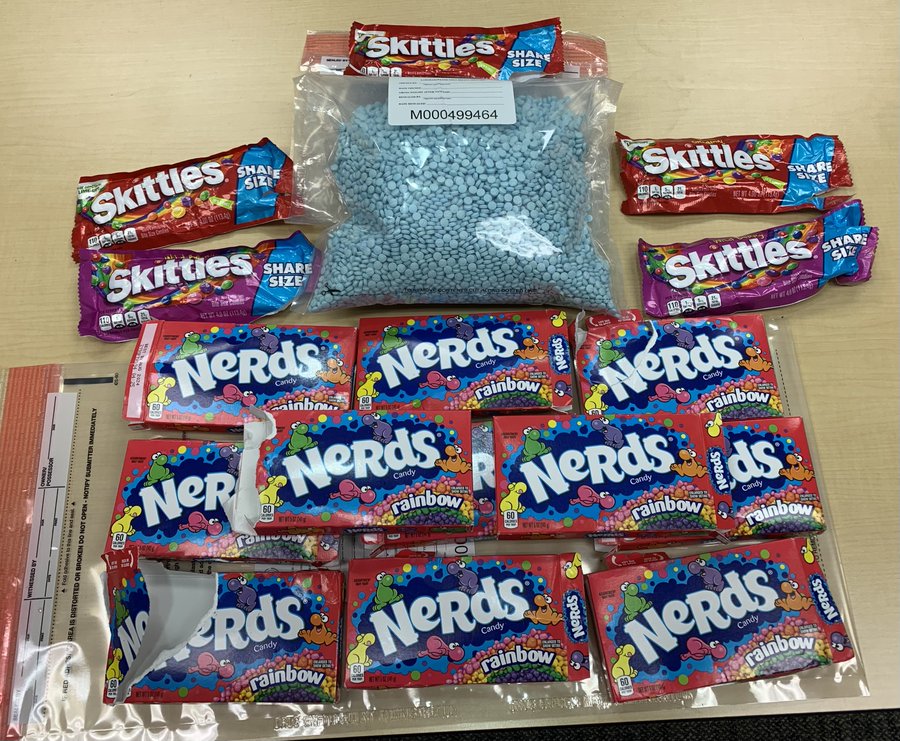 According to a press release from the US Department of Justice, Americans have a lot to be concerned about his Halloween because of the Democrat’s very scary leadership and permissive guardianship of the US Southern Border- that being that Mexican drug Cartels are targeting children by lacing children’s candy with highly deadly drugs.

Drug overdoses took the lives of over 108,000 Americans in 2021, with 66 percent of those deaths being attributed to synthetic opioids such as fentanyl, according to the CDC.

Breitbart News recently reported that police in Phoenix, Arizona, announced on Friday they seized nearly one million fentanyl pills that were allegedly trafficked by two Hispanic men, who were arrested during the bust. It was one of the largest busts in the department’s history

Here are the details:

As alleged in court documents and statements made in court, on September 8, 2022, Flores, Alelar and others arrived in an SUV at a meeting location in Wethersfield to sell approximately 15,000 fentanyl pills to an undercover DEA agent.  After Flores showed the undercover agent a sample on the fentanyl pills, the agent indicated that he needed to travel to another location to pick up the money.  Flores, Alelar and the others followed the undercover agent’s vehicle as they traveled south into Rocky Hill.  When a Rocky Hill police officer attempted to stop the SUV for a traffic violation, the SUV sped and ran over a roadside curb onto a grass area along the side of the road where law enforcement vehicles boxed it in.  Investigators searched the SUV and found numerous Nerds candy boxes and Skittles candy bags containing thousands of fentanyl pills.

“Trafficking fentanyl is already and undoubtedly a serious offense, but one doesn’t have to stretch their imagination too far to consider how disguising fentanyl pills in children’s candy packaging, as we allege, can result in even more tragic consequences in the community,” said U.S. Attorney Avery.  “I thank the DEA Task Force members for their work in this investigation and for taking this substantial quantity of fentanyl off the street.”

“Fentanyl is causing deaths in record numbers and DEA’s top priority is to aggressively pursue anyone who distributes this poison in order to profit and destroy people’s lives,” said DEA Special Agent in Charge Boyle.  “Illegal drug distribution ravages the very foundations of our families and communities so every time we take pills containing fentanyl off the streets, lives are undoubtedly saved.  This investigation demonstrates the strength of collaborative local, county and state law enforcement efforts in Connecticut and our strong partnership with the U.S. Attorney’s Offices.”

U.S. Attorney Avery stressed that an indictment is not evidence of guilt.  Charges are only allegations, and each defendant is presumed innocent unless and until proven guilty beyond a reasonable doubt.

Flores and Alelar have been detained since September 8, 2022.

Last month, DEA officials raised the alarm that Mexican drug cartels are disguising “rainbow fentanyl” pills as candy to get young individuals hooked as early as possible to drive their profits.

“Rainbow fentanyl—fentanyl pills and powder that come in a variety of bright colors, shapes, and sizes—is a deliberate effort by drug traffickers to drive addiction amongst kids and young adults,” said DEA Administrator Anne Milgram.

Milligram also noted the number of colored fentanyl pills being seized is increasing, as the DEA and law enforcement officials have confiscated pills in colorful presentations in 21 states, NBC News reported.

“We’re seeing an unprecedented amount of kids dying as young as 13 years old,” Maltz said. “And we know now, the DEA says, that 40% of the pills contain a potentially lethal dose of fentanyl.”